Crashing into week 3 of the event now and plenty of progress. Squaduary runs through the month of February and aims to help people get a new squad built and painted. Throughout the month you pledge, build and paint a set of troops for your army. The aim is to get some of your grey plastic pile and turn them into painted troops on the battlefield. Some models may have been partially built, some may have been base coated, but it is up to you. These minis could be from Warhammer 40K, Age of Sigmar, Bolt Action or anything else. Don’t feel it has to be Game Workshop only.

This is the fourth year of Squaduary, the final posts for each year are linked below:

Previously I have laid out some stages as a guideline, I will repeat them below in case they help.

There will be four stages, each taking a week. We are currently on stage 3:

Cleaning up your colours and picking out all the bits to make the mini stand out.

Adding the base or just painting it out.

There no hard rules for this event because this is a hobby and so should be fun for all. Getting that unit of Horus Heresy Destroyers done, your Orc Blood Bowl team out, your Malifaux crew ready to game, etc. Use this as a chance to gain some hobby momentum for the new year. 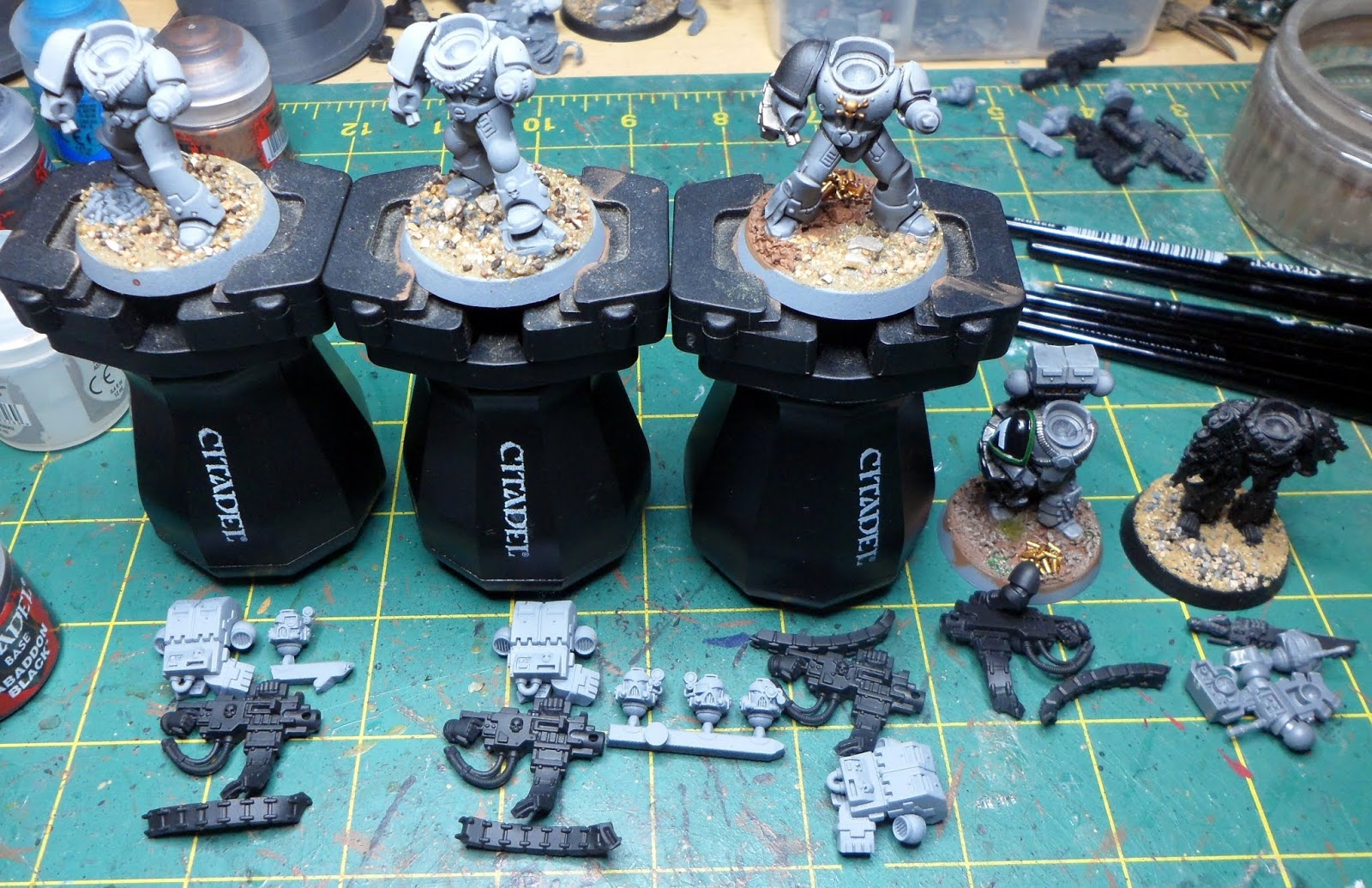 Hello fellow Bloggers or Squaduary Squad, only a little progress this week, but some progress all the same, got carried away with one trooper and failed to keep to one stage at a time. Nevermind 🙂 Got the basing material down and sealed so that was something.

‘Finally Finished’. You see that expression all the time on forums and social media. “Hey guys, I finally finished my <<insert latest project here>>!”. I try to avoid using it, because somehow it implies that I wasn’t going to finish or that I didn’t really want to. Or that it took so goddamn long to finish that I secretly wish I hadn’t started. But in this case it’s appropriate. I finally finished my second batch of Skitarii! 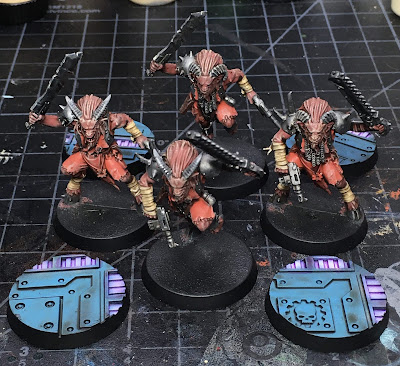 Chaos Beastmen! During week two, I put aside the Spindle Drones and Ur-Ghul to get paint on the beastmen. It all began by blocking in the base colors for all areas. This is a classic stage where you are doing work towards the vision; but it all looks pretty awful

Folks from Stepping Between Games:

Trying to catch up my Delaque gang for #squaduary. Experimenting with getting the right sort of look for their black leather coats. Working up from a base of shaded dark greens, into lighter blues and then washing with dark blue and a bit of black. May need a touch of brown wash to get the right depth. 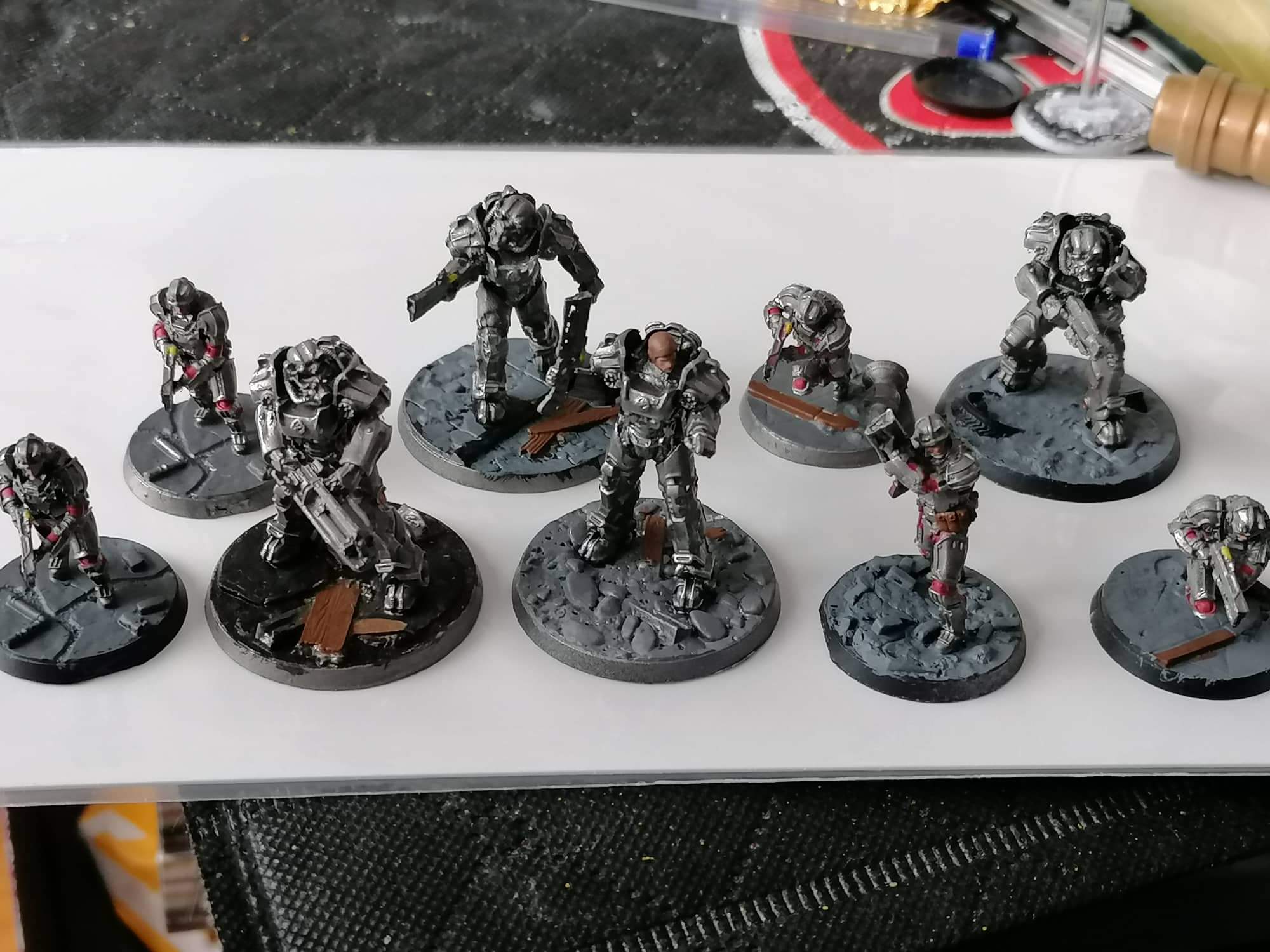 Just have more detail to do on these guys 😁 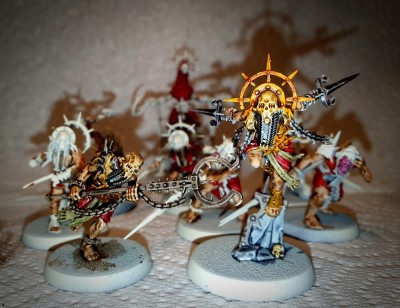 For various reasons my head hasn’t quite been in the game this week so, I’m afraid, I only actually set brush to model on the day before this update was due; consequently there’s not been a lot of progress.
Nonetheless I made a commitment that I would do some – and I get very annoyed with myself if I don’t meet my own commitments and expectations so… here we are.

Last week I was bemoaning these models for being difficult to build and very spindly; given that complexity I had expected that they would also be really difficult to paint – I was incorrect.
Don’t mistake me – they’re not super easy either (by which I mean 5 minutes of drybrushing to a get a battle-ready tactical marine) but they are more straight forward than I anticipated. Of course I’m still just blocking in colours and as you’ll see I’ve made more than a few errors which I will need to go back and correct.

The most tricky part is probably their underskirts which track in so close to the legs of the models as to make mistakes inevitable.

I should, in fairness, have seen this before I started but I took a look at the figures, worked out there was more flesh on show than anything else, and began blocking that in first. Had I started on the skirts then I could have done their legs afterwards with no mess or fuss. C’est la vie.

I did need to take some time to work out how to do the dead-skin coverings. You’ll see the two lads on the front have got degloved hands hanging from their belts as decoration (lovely). I couldn’t find a contrast paint that would give this sort of dead-flesh look so I experimented with some mixes of Orc Flesh and Gulliman Flesh. I think the mix on the right hand model looked better, what do you think?

One thing I do rather like is this guy: 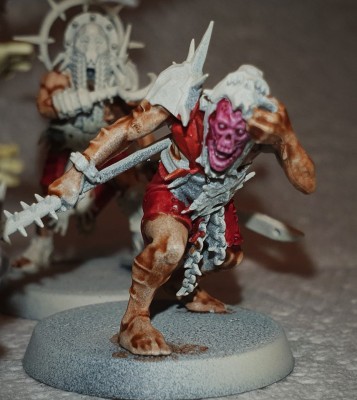 I love the way that all of the Unmade have these creepy-ass skull masks, which are bad enough in their own right, but then when they weich* their masks up they have these horrible flayed faces underneath. It’s wholly over the top and unnecessarily grotesque – I love it. (Though I have to apologise for the crappy focus in the second pic)

Finally, for those who might be interested, I did indeed throw these lot against my D&D party last week. They pretty much chewed through the cultists like so much chaff but the summoned devil gave them a hell of a time – the party’s druid definitely picked up second prize. Overall the PCs prevailed but it was a crunchy fight, and was right on a knife edge for a lot of it. The players went away happy and buzzing (in spite of their battered characters) so overall I think it went pretty well.

* it’s a Scots word…. I’m not sure there is an actual English equivalent to it but broadly speaking it’s something similar to “move quickly” 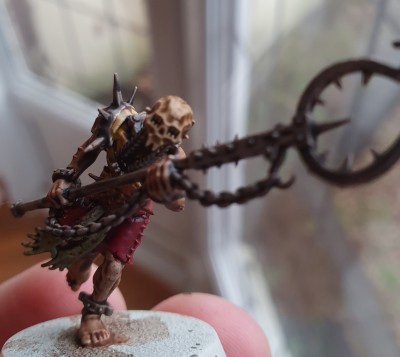 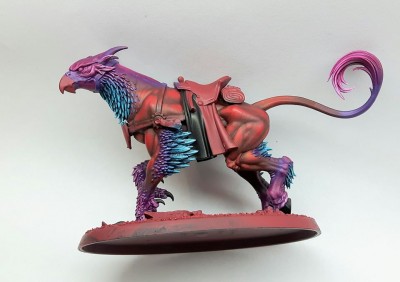 Colour testing for Squaduary is coming along… 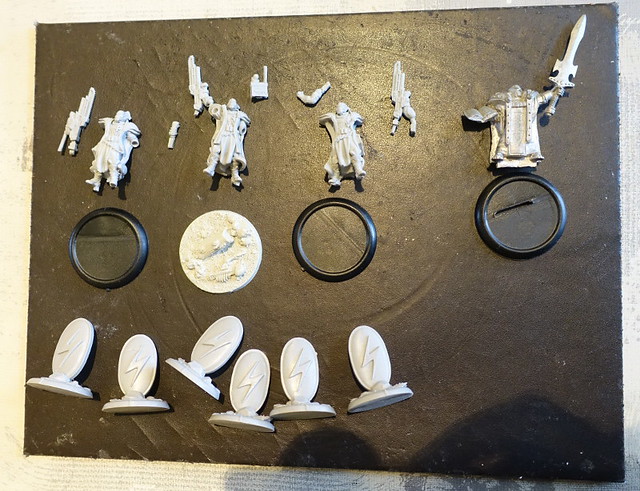 I’m working on the last of my Inquisitors from Warzone. Since they are only 3 models and that felt like a cop-out I’ve decided to add in Cardinal Dominic and the Cartel Markers I got for the game. Step 1 was a wash with alcohol wipes to remove the last of the mould release. 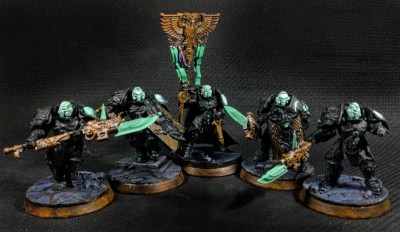 My Custodes of the Damned have really started to advance now, plenty of work yet still to do though. They are using the techniques I used for my rust and glow test mini. The armour still needs highlights and basing needs to be worked out.

How are your own projects going?