Welcome to week four of Squaduary!

Welcome to week 4 of Squaduary!

We are now on Stage 4 of the process, the final push:

Links to the other weeks:

We have seen some great progress and minis produced so far and between this post and next weeks final posting of finished work we will have many more.

I have managed to undercoat all of my Iron Snakes Centurions in Leadbelchers and Corax White, two of the three main colours of the scheme. On the weekend I will be laying down the bronze, in preparation for some verdigris weathering. This will give me two weeks to paint all of the detail if I am to get these guys done for Squaduary. 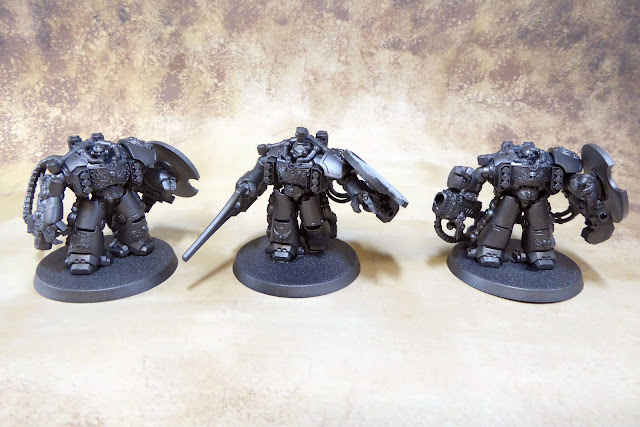 I didn’t finish painting anything this week as I’m aiming to polish off a bunch of stuff at the end of February. 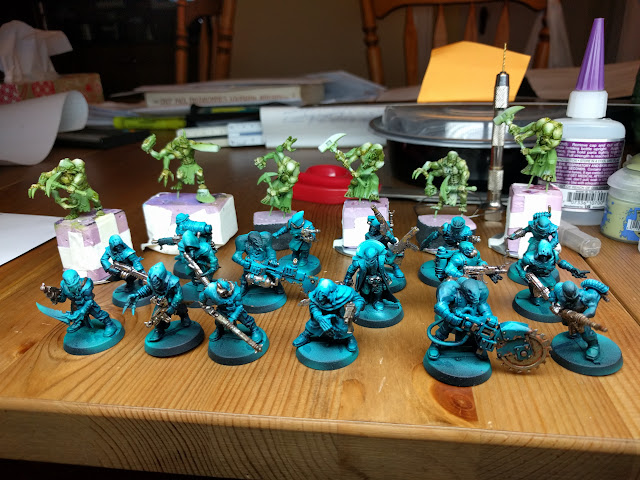 Acolyte with Rocksaw: airbrushed, inked, and weathered metals. The below two photos were my test run of the weathering technique I just sort of invented, and I’m pretty happy with it! It’s pretty simple and quick, so please let me know if anyone is interested in a rundown/tutorial. 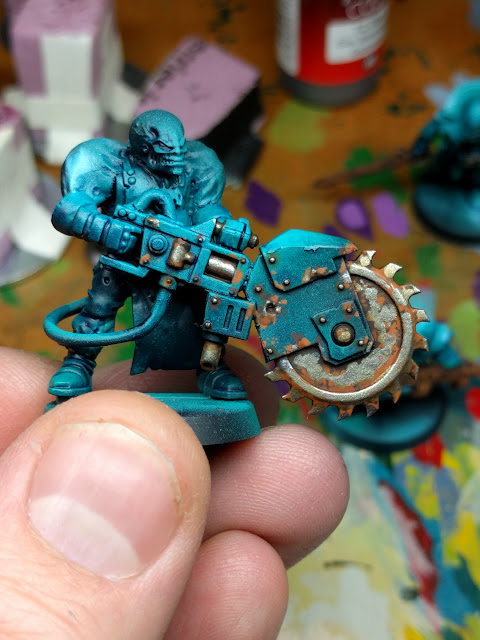 A lot going on to start this week with painting. Sadly, I am slightly delayed on week 2 of our #Squaduary challenge from Stepping Between Games (link). The flu got me…. I will be combining posts on week 2 and week 3. Being a teacher and a natural rule follower, I have been stressed out about not making the deadline for week 2. I will strive to improve! 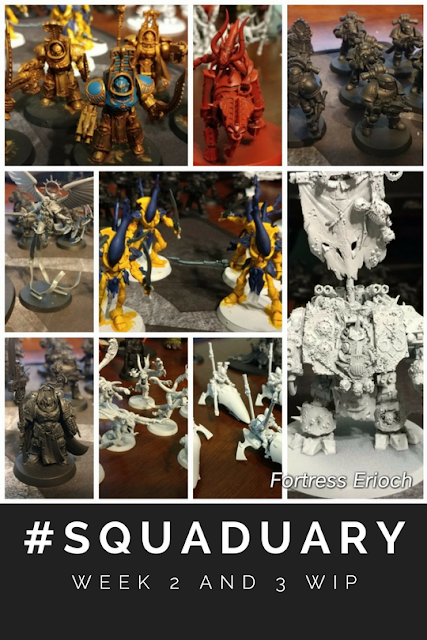 I started the month with Tree Revenants.  I’m pleased to say that the squad is complete and I will be revealing them closer to the end of the month.  Today I want to show my progress on the Kurnoth Hunters with greatbows, my second of two pledges for the event. 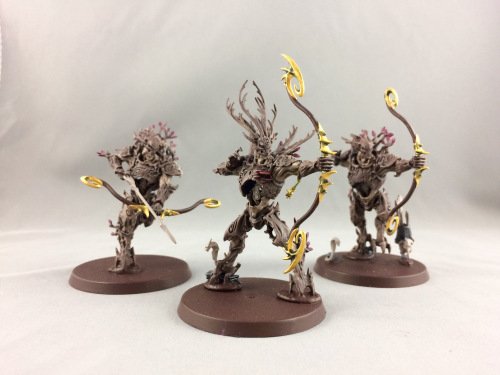 Due to some upcoming work constraints, I have been a bit limited on time for this week’s Squaduary Challenge. As such, I had to scramble to get my squad of Neophyte Acolytes up to some semblance of snuff. Here is what I have:

My squaduary project looks a little more respectable, what with everyone basecoated and washed now. 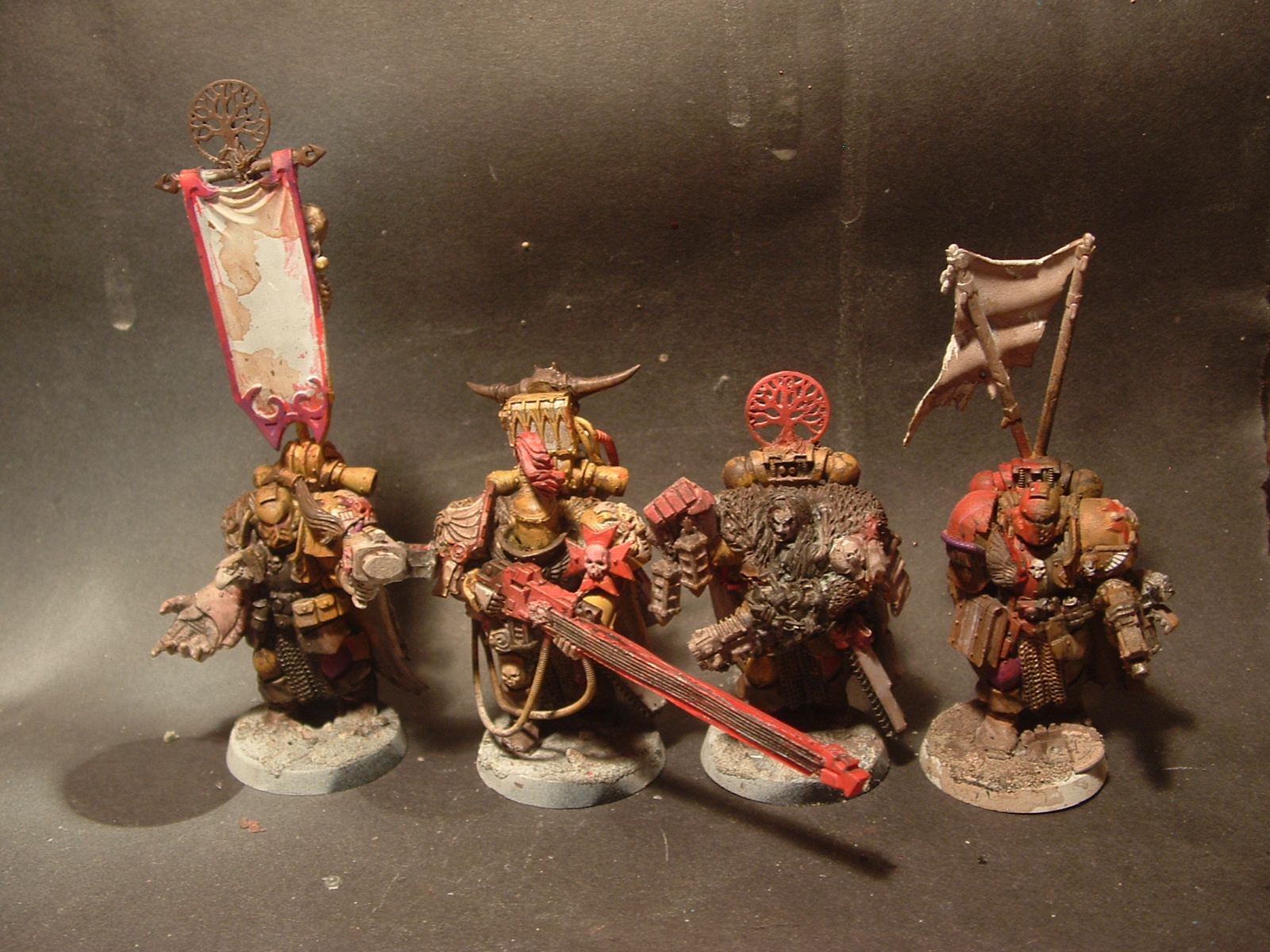 The Ogre is complete, but finished pics to come soon. Meanwhile, the Catcher is also completed. The two Blitzers are in progress at the moment. Very early work, but there’s paint on them at least! 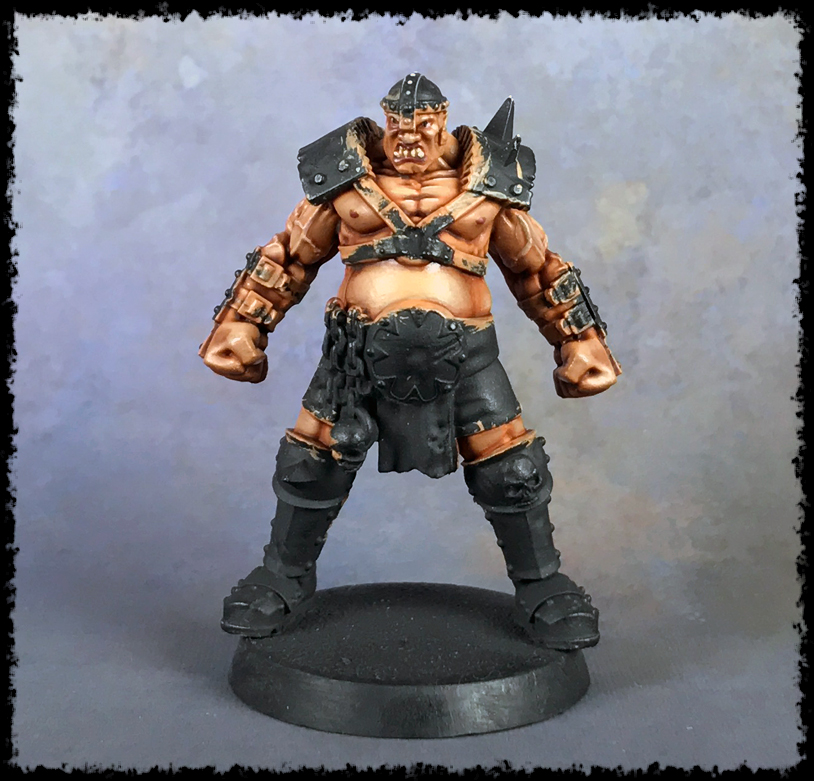 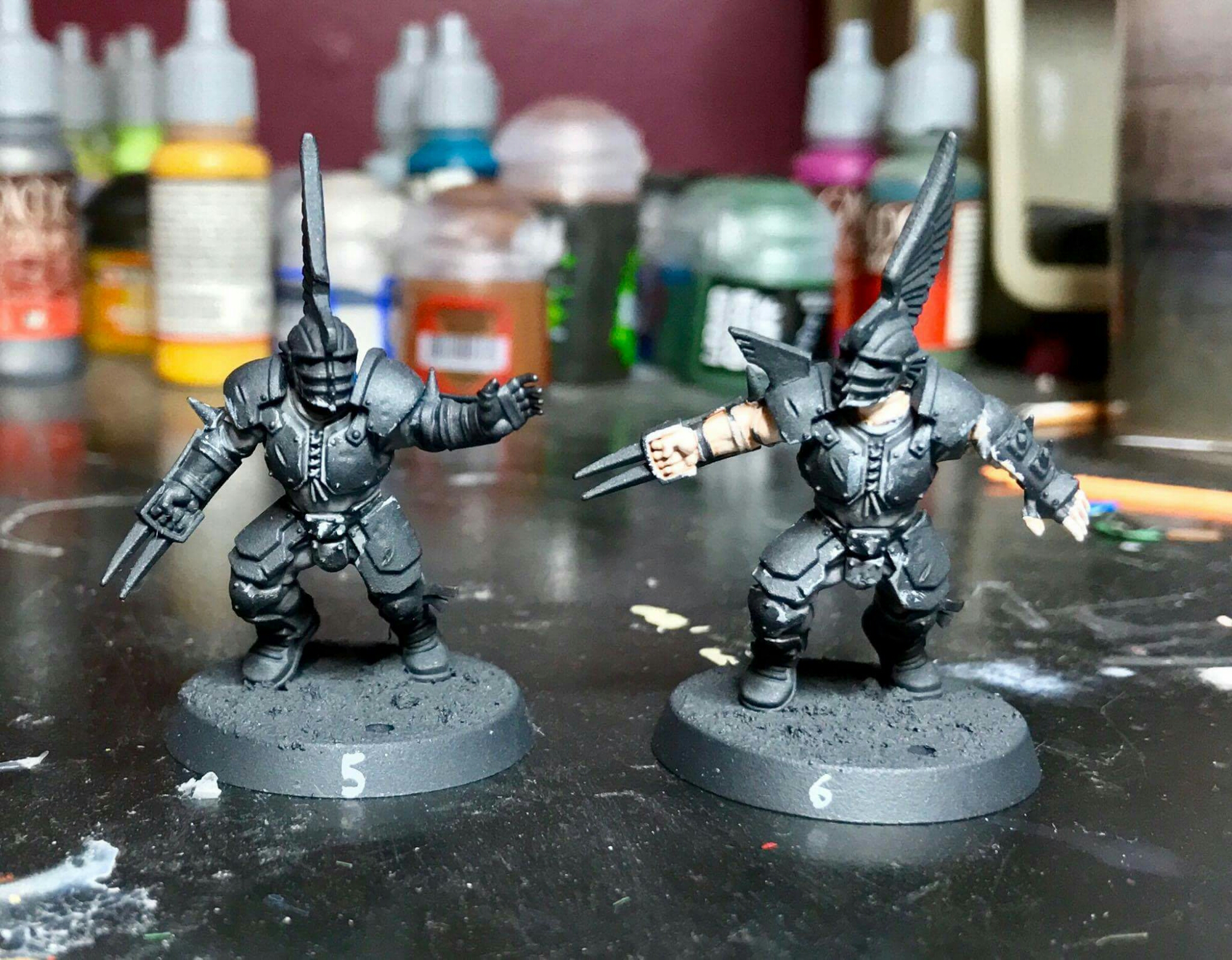 Had to rush them to get them ready for Throne of Skulls, they have already claimed 2 mega armoured Nobz, a devilish, a maulerfiend and a Darkshroud. 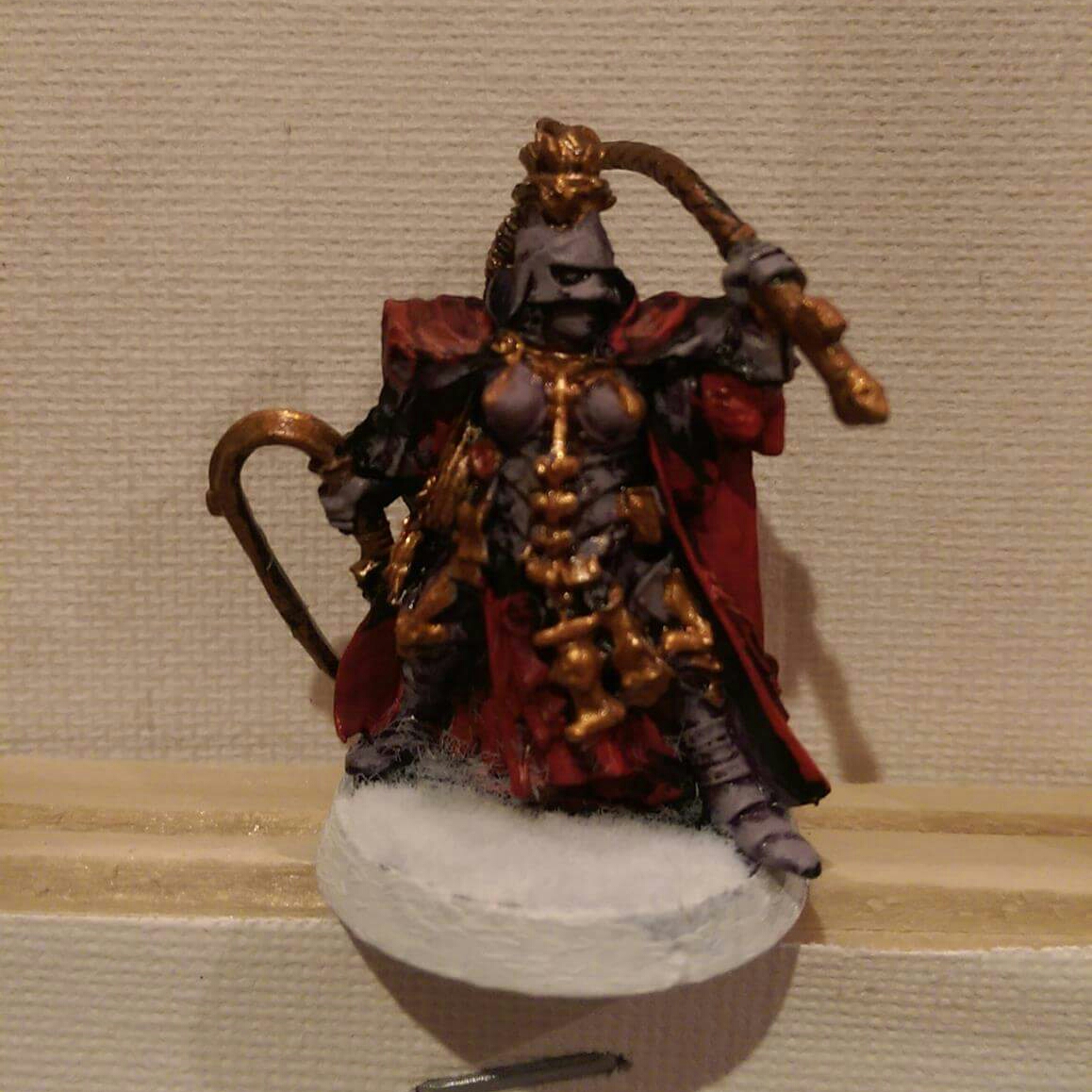 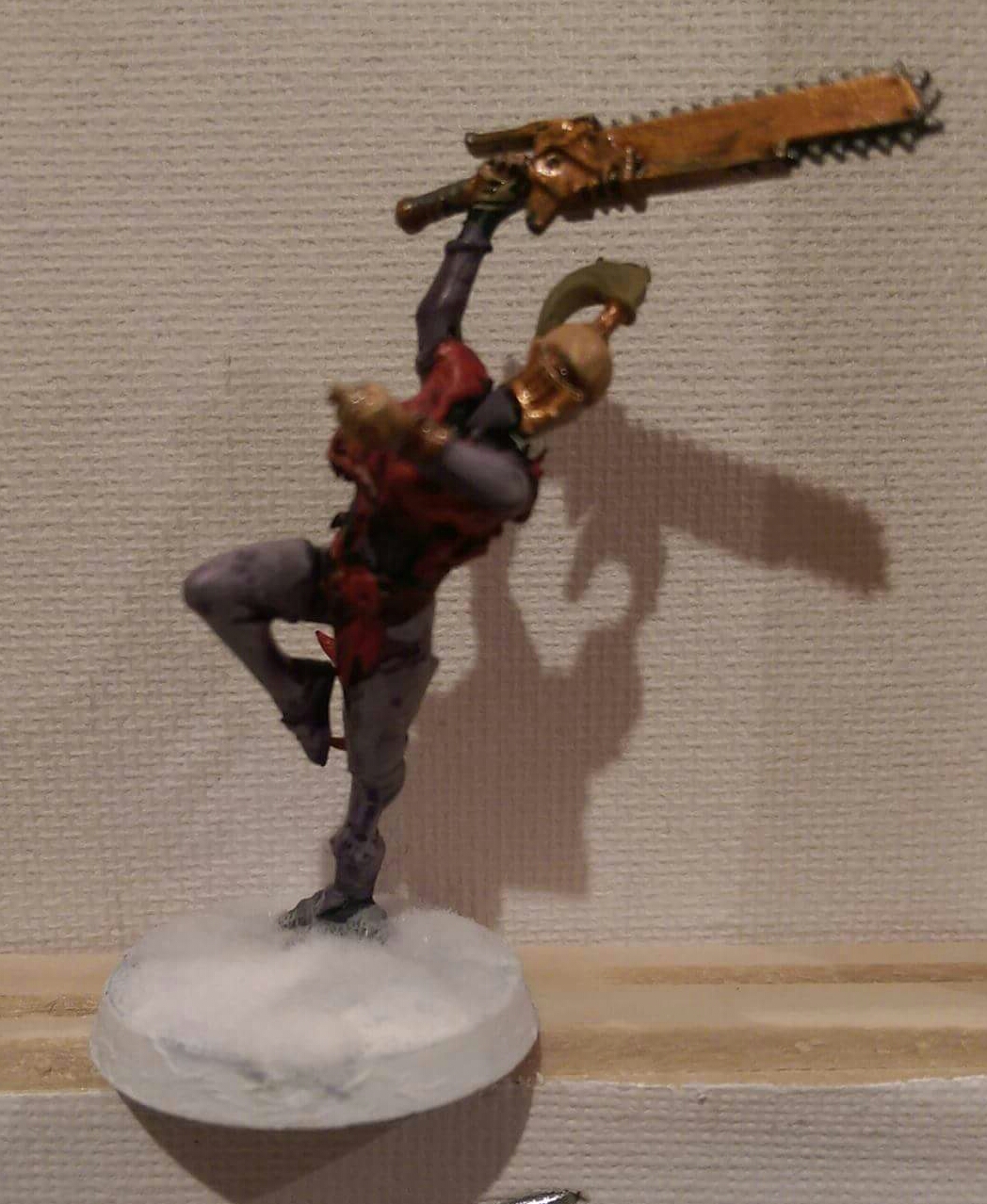 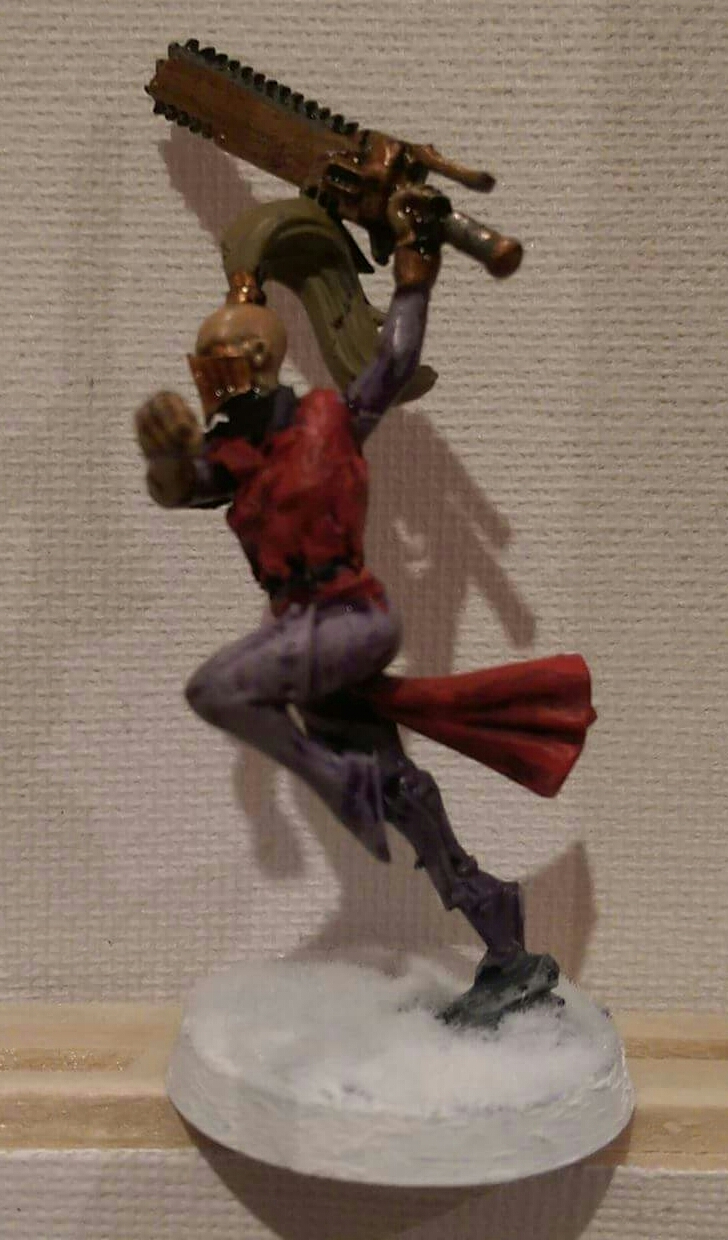 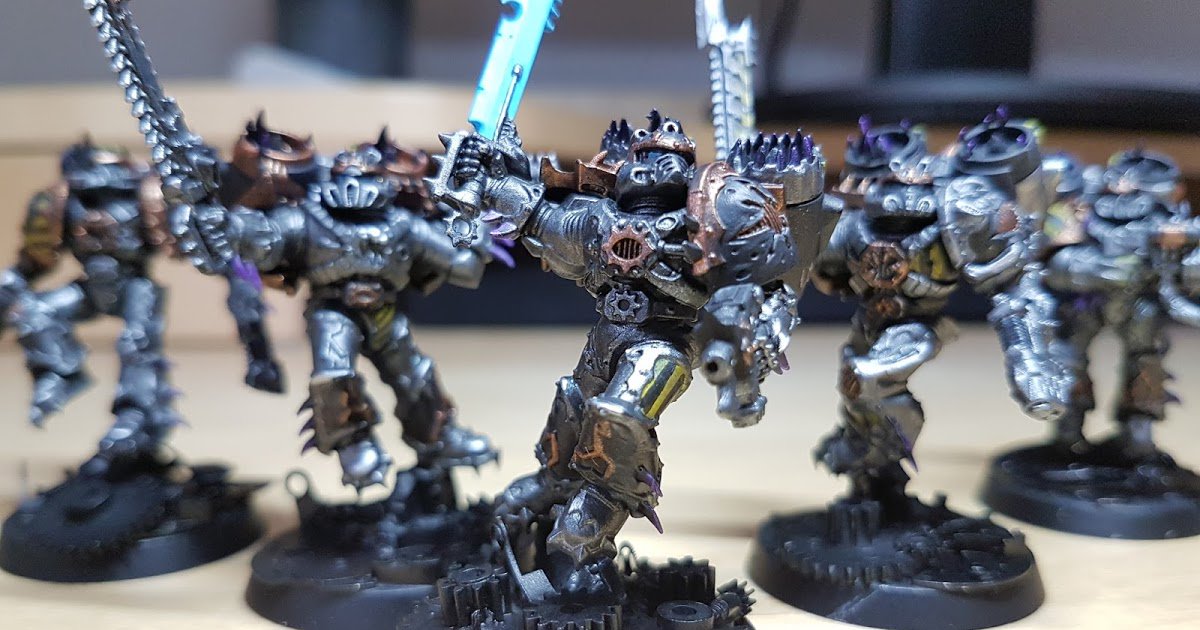 Just a quick update on my #Squaduary pledge. Managed to get another Tartaros finished, this time the wolf armed with the Heavy Flamer. I’m really happy with how my wolves have been turning out after following the WHTV painting scheme. The other three are base coated in Mechanicus Standard Grey and waiting to be painted within the next week or so. Need to get a move on if they’re to be done in time for the end of the Squaduary pledge.

(Google Translate on the text but look at those bases!- Rory)

It’s already Monday again, as time goes by. My plans for this week were to finish the details of the minis, the company’s distinctive metallic leathers and squares, but by life circumstances, I could hardly paint the leather of the holsters, so I went to plan B, which was to paint The stands This means that I leave the above for the decisive final week.

#squaduary– couldn’t bring myself to paint black all day so got pads done. Happy with the #raptors, other 2 not so much #WIP 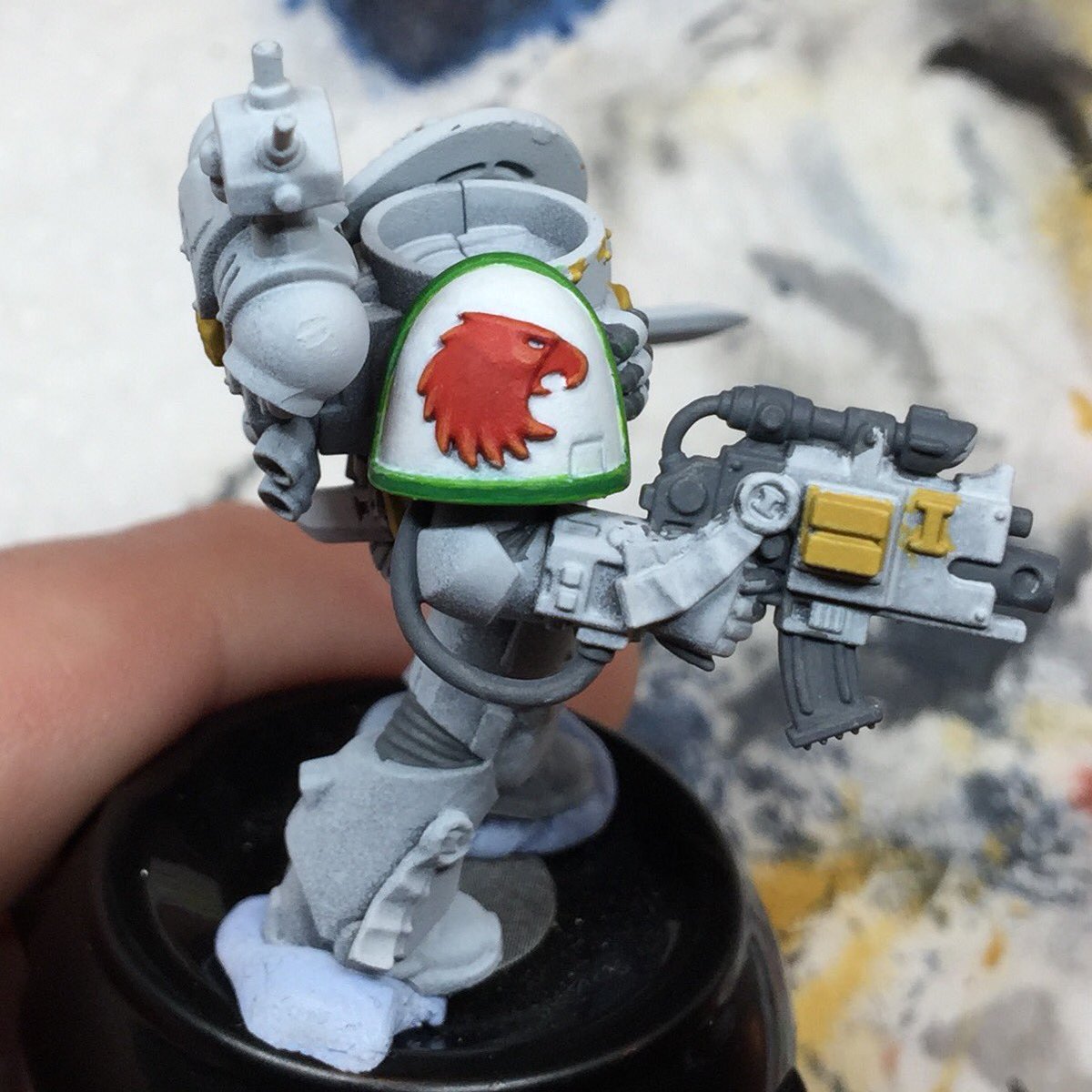 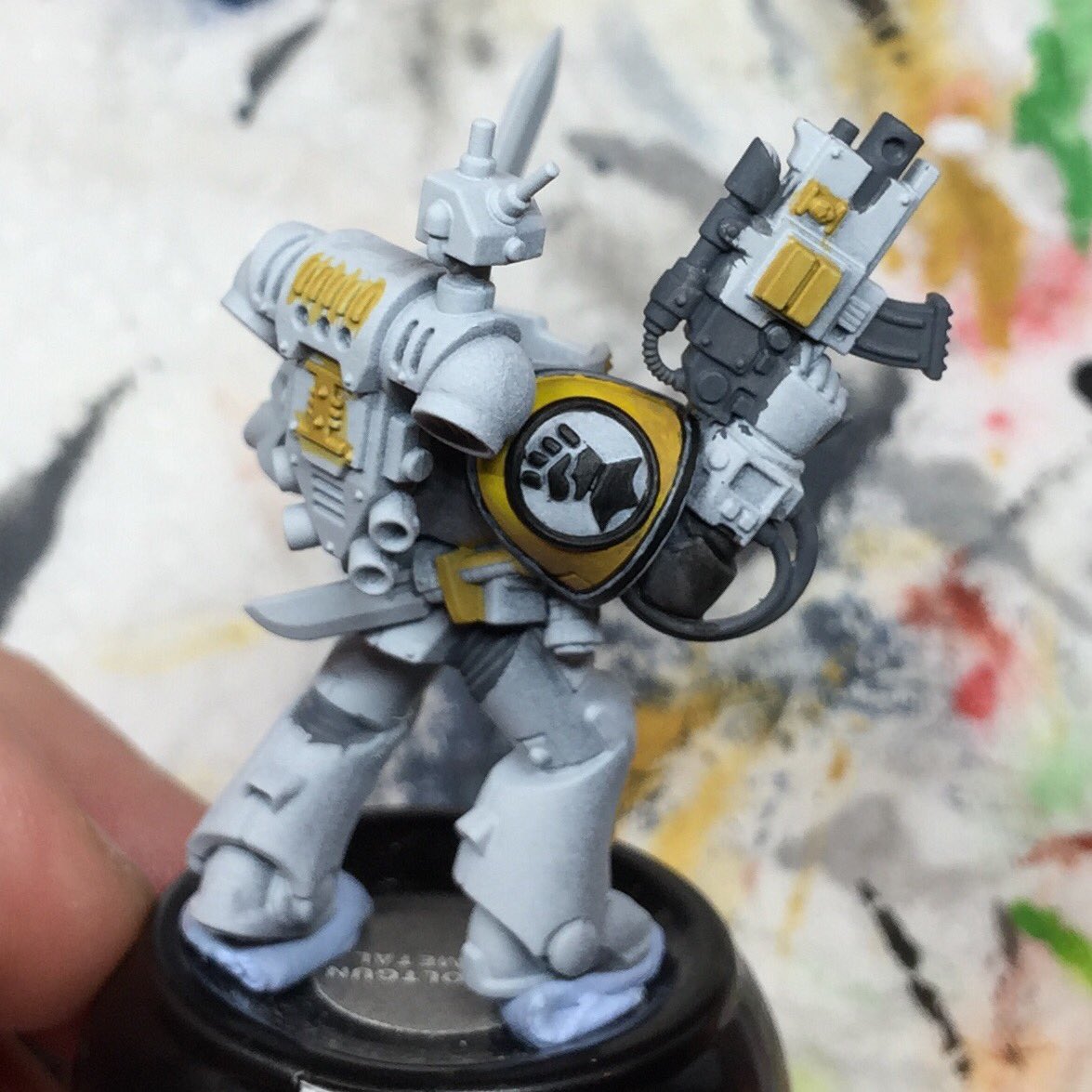 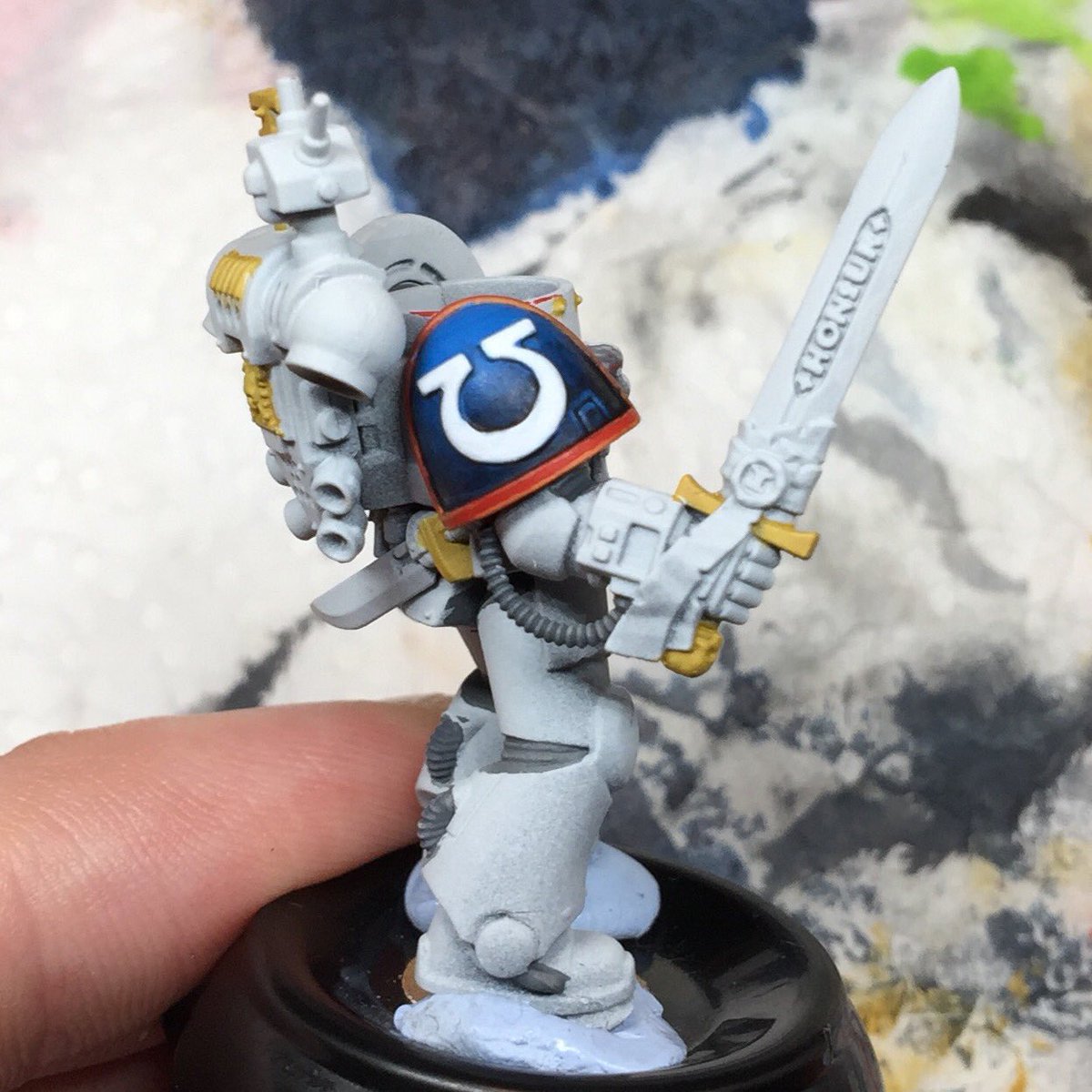 Closer and closer. Some drybrushing for extreme highlights, and I’m calling these tabletop ready. 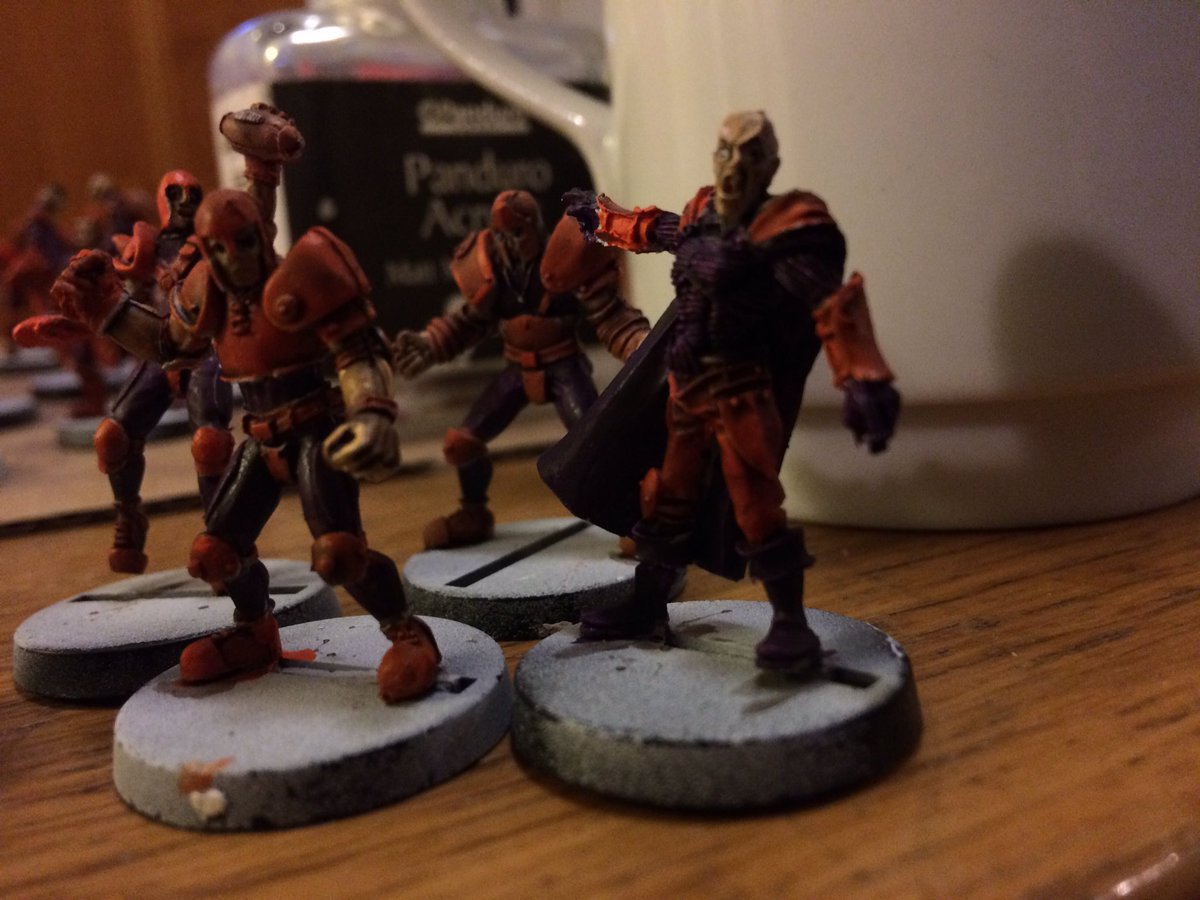 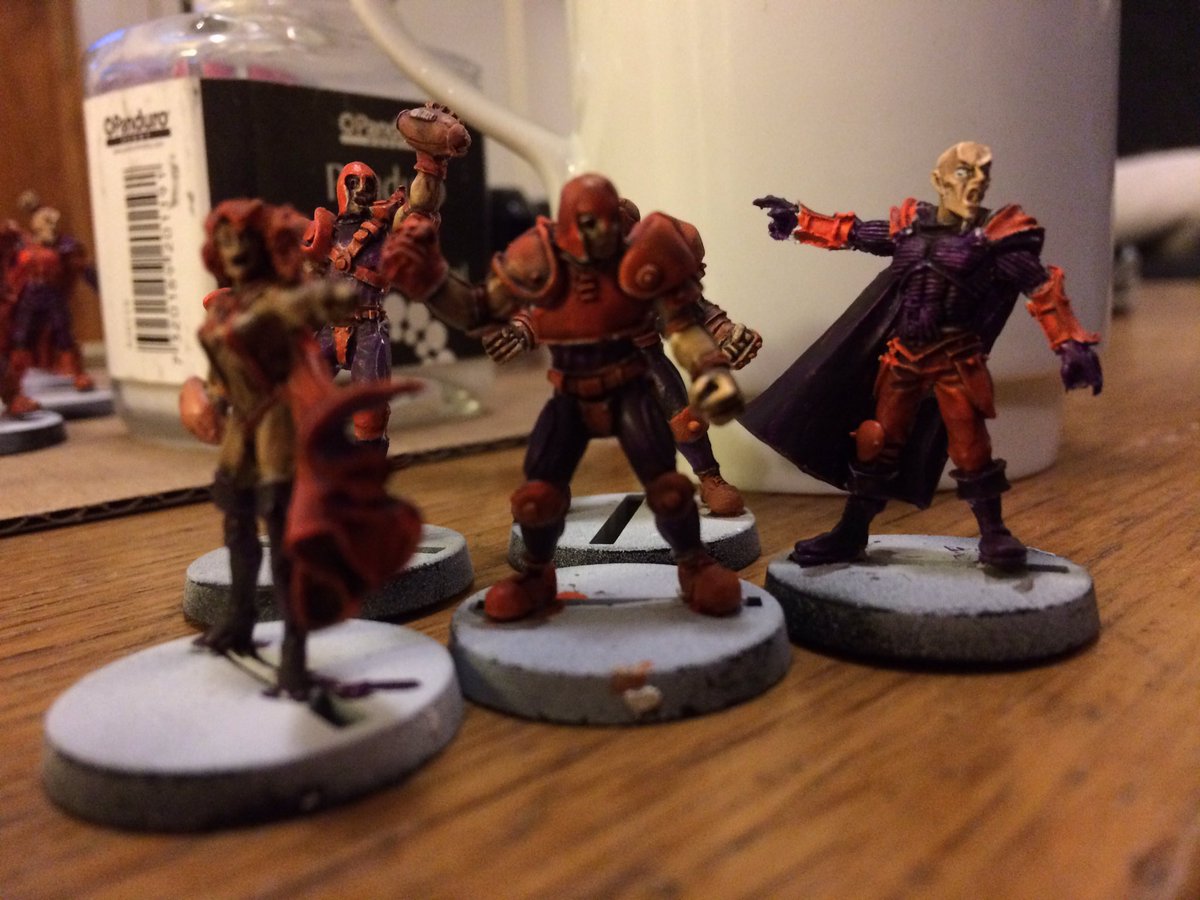 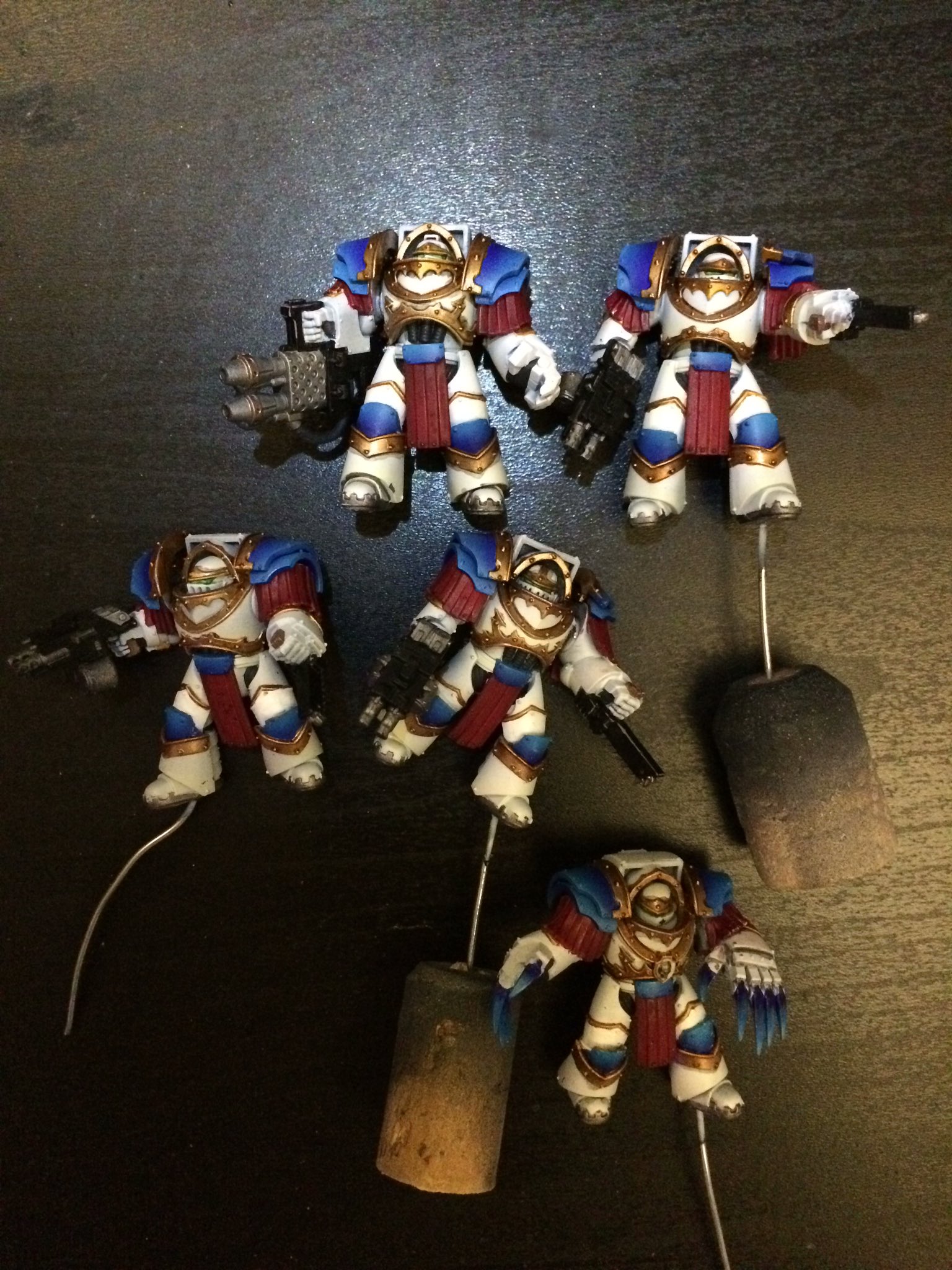 As you can see from the pictures, I have completed four out of five models and am working on the fifth. So far I’m very happy with the way that the challenge has pushed me to paint the squad (even if a plasma caliver and an arc rifle aren’t the ideal armaments!) 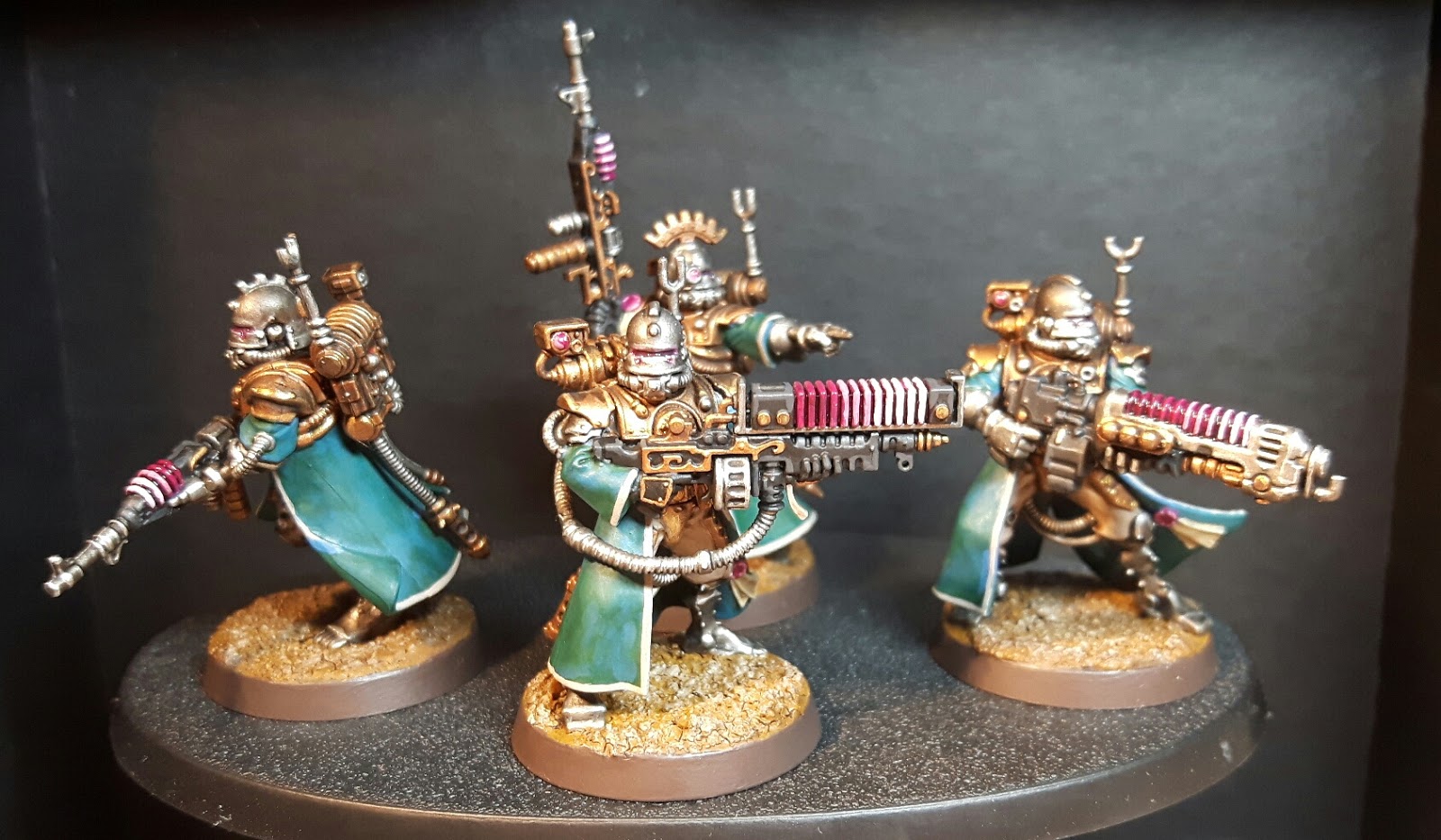 (Rob got distracted with painting up his boss, I shall bully his Island into painting squads – Rory) 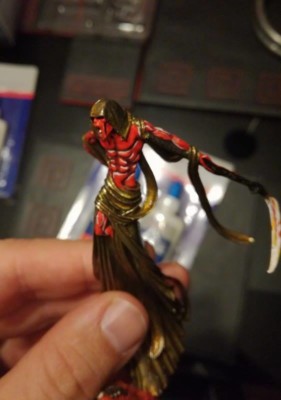 Evil Sunz nob is all done. Very happy with his super fast flame Klaw.
The Goff Nob needs a few more touch ups on the base, but it’s basically done.

Up next is the Death Skull Mek boy.
Gotta get a few more metal colors on it, then wash the hell out of it.

These guys have been pretty fun to paint. Each one getting vastly different paint styles is a nice change from always doing batch paintings of 5 or more. Makes painting each model a new experience.

Keeping up with my Squaduary goals. Test figure finished and the rest of the posse to go. 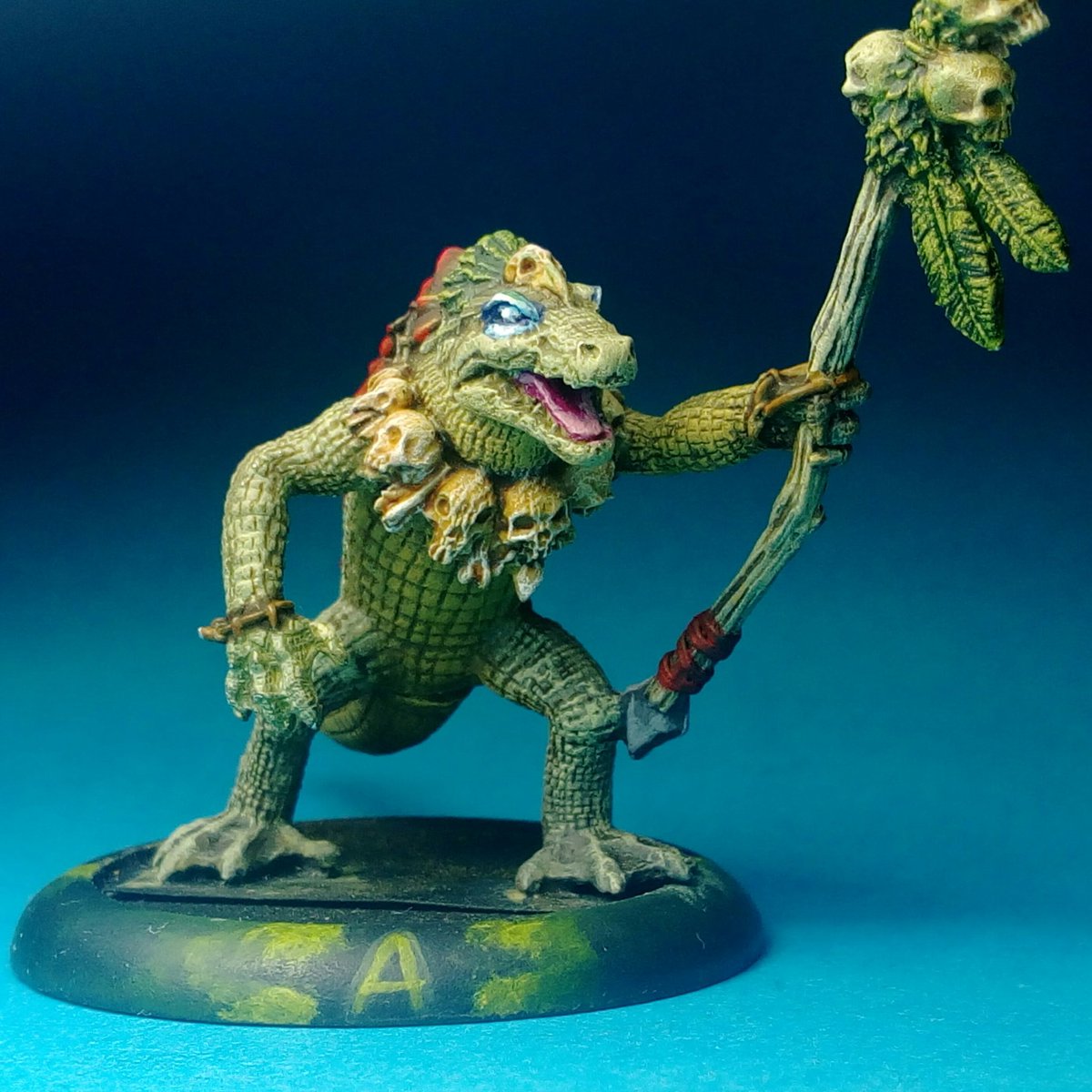 This week I’ve been base coating another 5 guys ready for the final work and detailing during the final week of Squaduary. I’ve been massively distracted by a sudden need to create an entire coven of Dark  Eldar (those few Wracks have caused some kind of unstoppable epiphany!) so I’m hanging on in there with this project; bitterly fighting crazed obsession to the end. 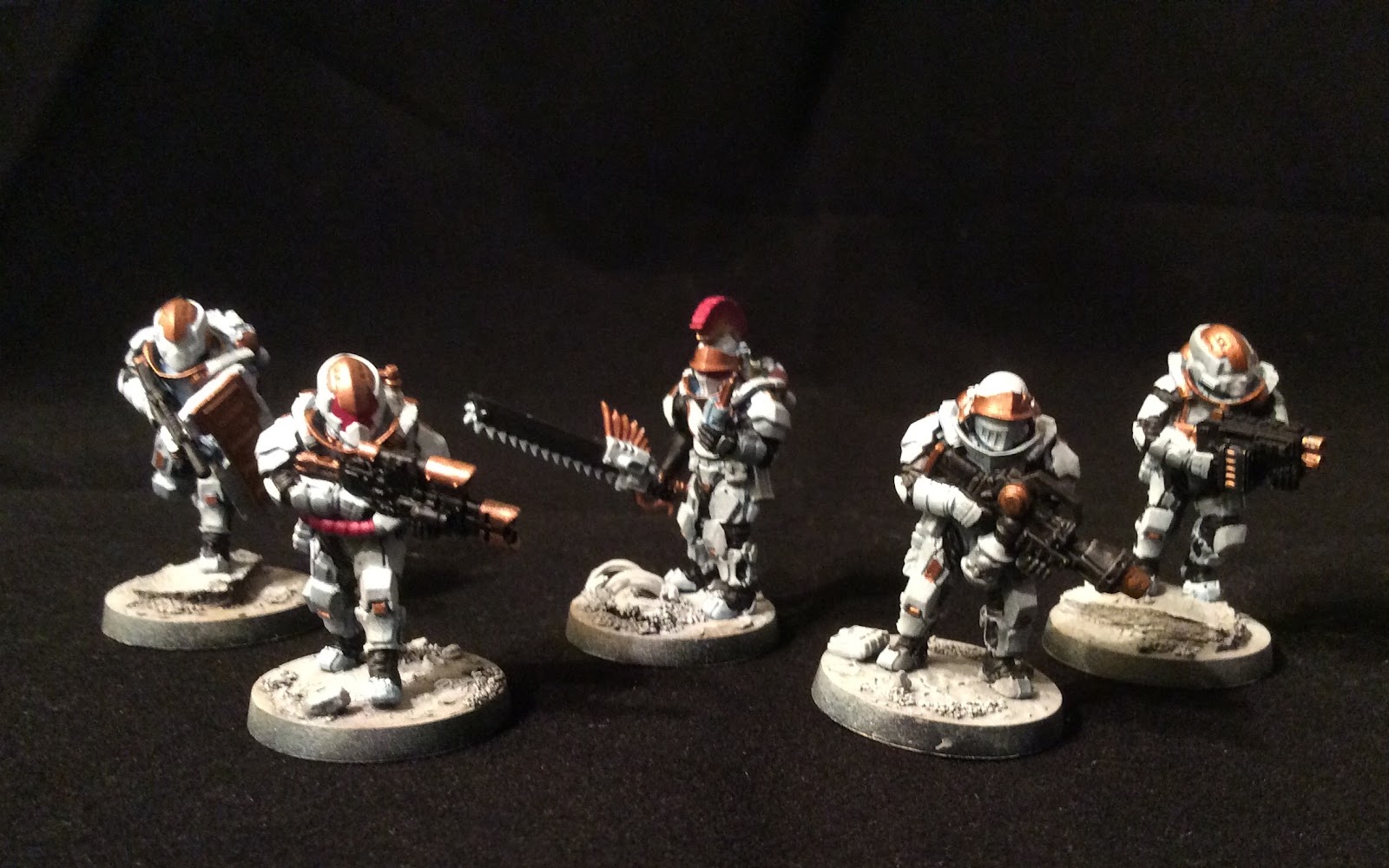 So, a little more done this week, two more Marines finished and a third at the highlighting stage. That’s now over the halfway mark, 6 finished, 4 to go. Should have these all finished and showcased by the end of the month, easy. Thanks Squaduary, great motivation from reading other participants progress and seeing their squads come together. 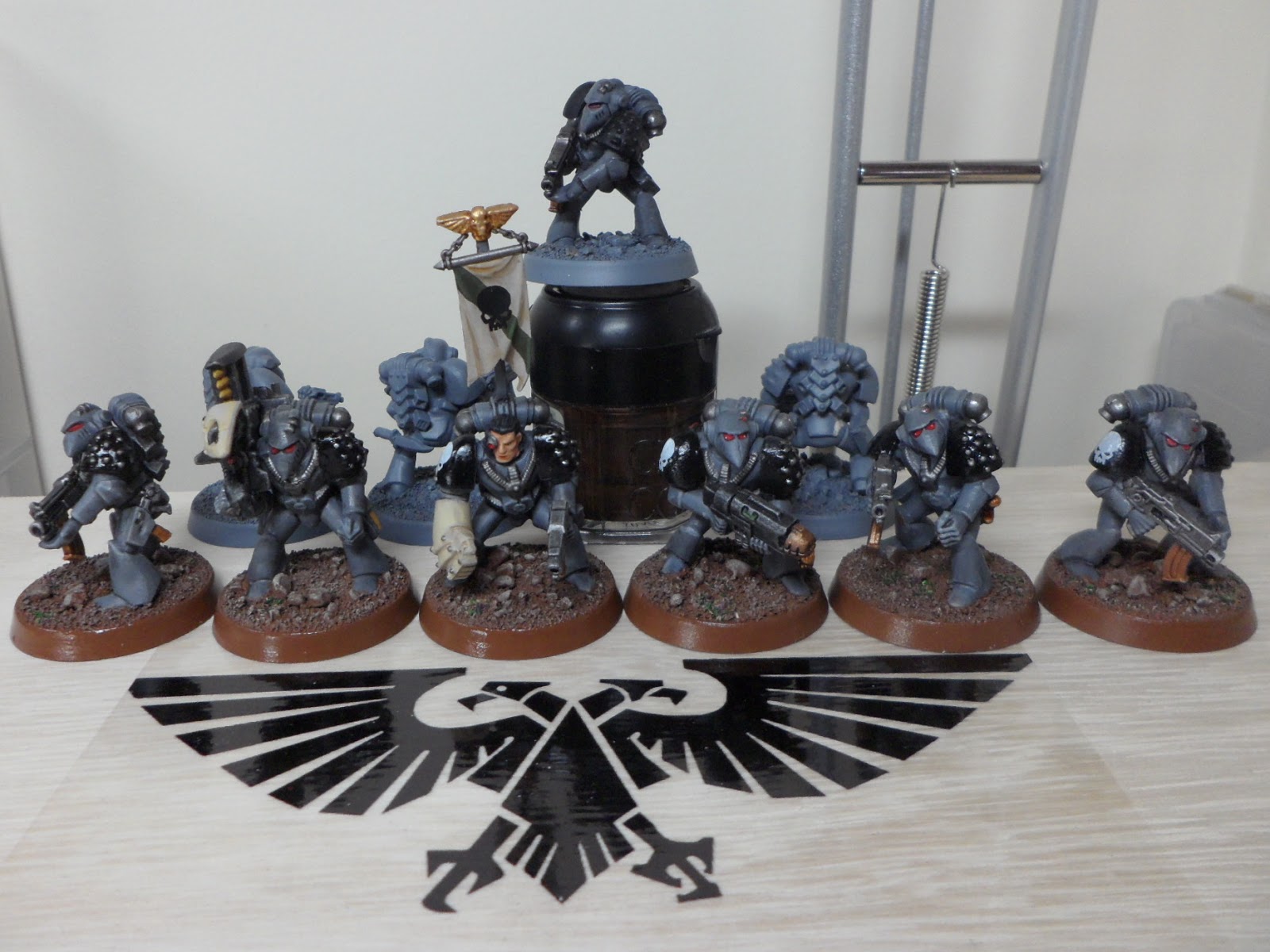 Just a little weathering to go! 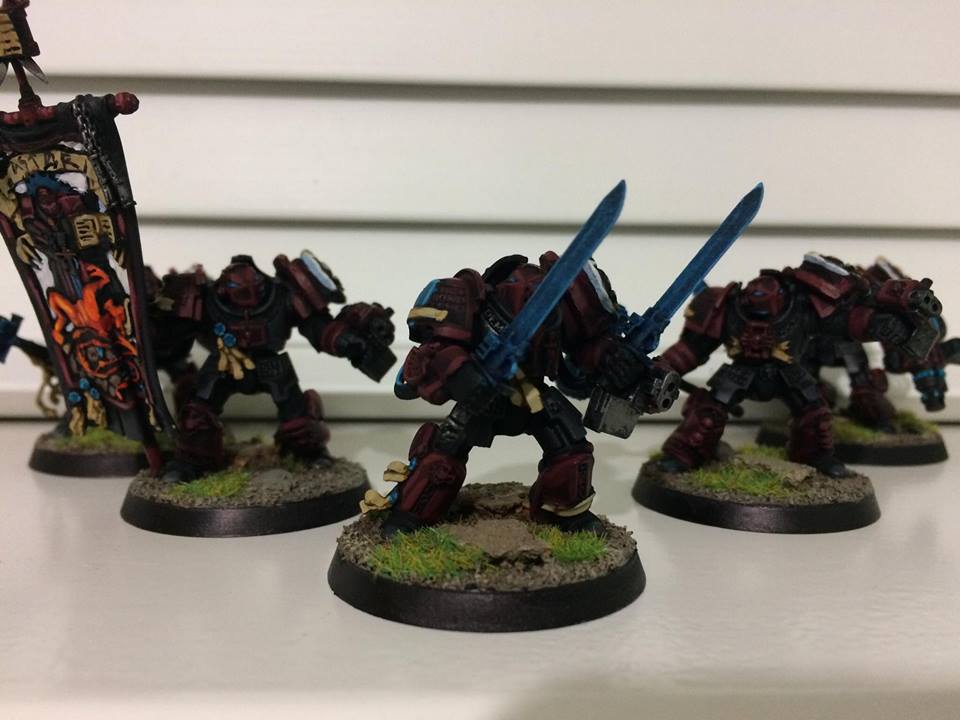 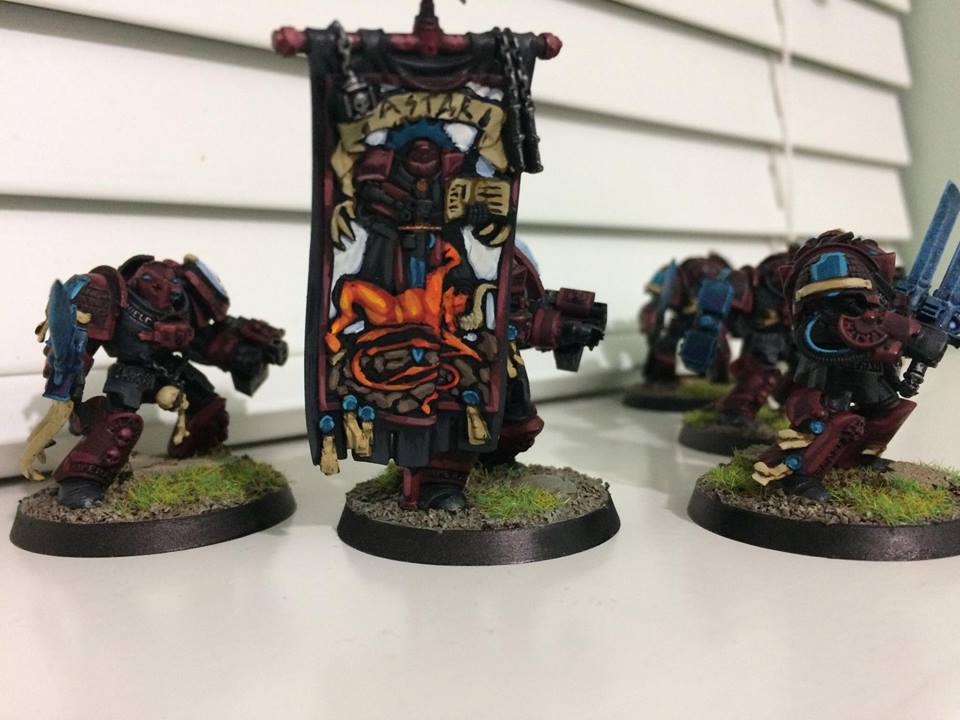 Needless to say I was less than enthused. I opted to watch Starship Troopers and work on my Immortals. Man…Starship Troopers…so goooooood!
Still bad lighting. Mediocre work. But these guys are coming along! 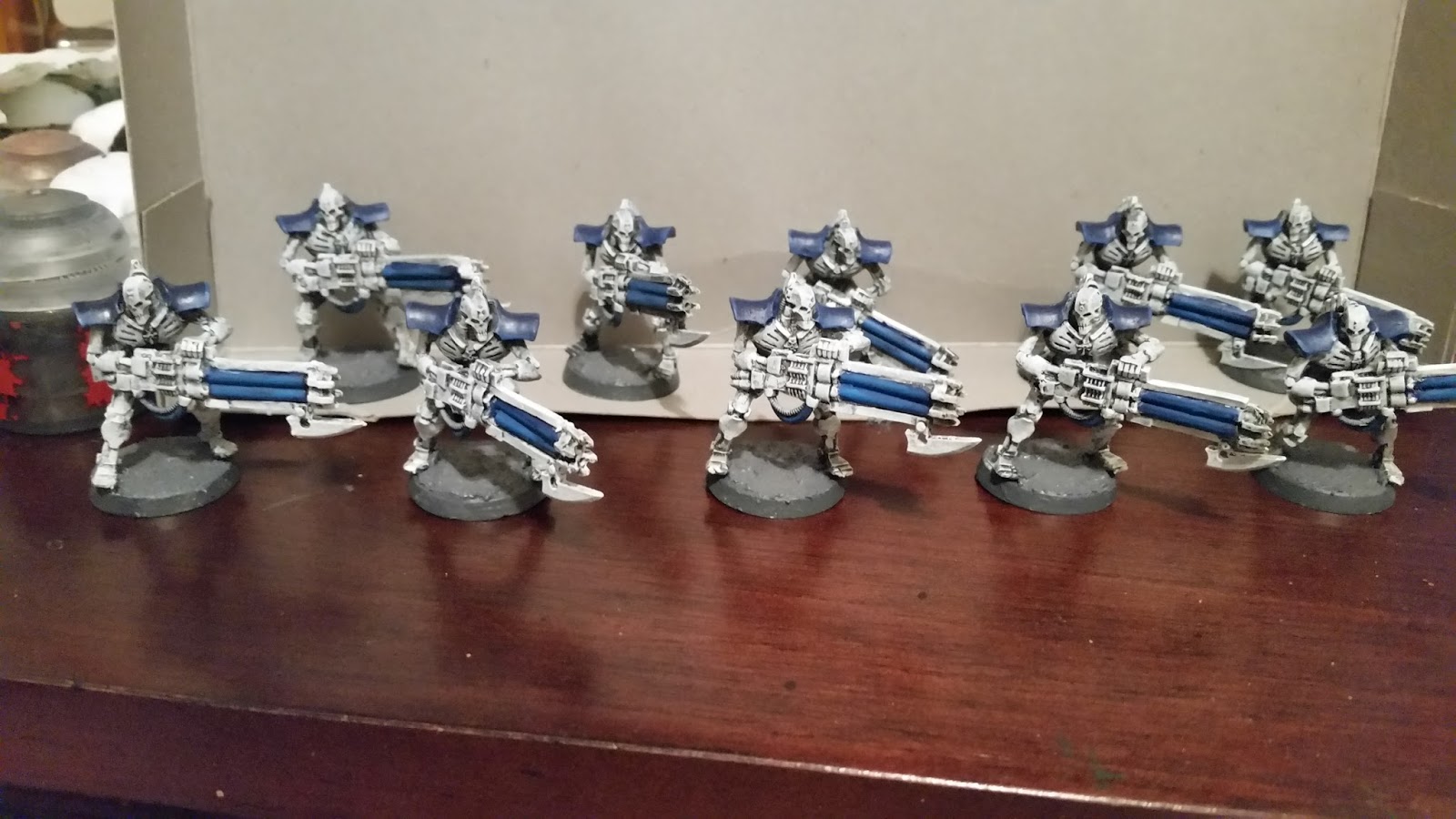 Finally finished my ordo of Ion Age Maligs led by Senga in her lovely pink frock.

These guys are just about done, just an attempt at transfers and the bases. 16 thoughts on “Squaduary Stage 4 – All about that base”