With the end Squaduary closing in we return to our trip down the Webway. This is the third in a series of articles by my friend Allen Stroud: an author, university lecturer and long time Warhammer fan. So over to him:

“Many of the Eldar Elites and Fast Attack choices are Aspect Warriors. The main six (Swooping Hawks, Dark Reapers, Fire Dragons, Striking Scorpions, Howling Banshees and Dire Avengers) have been around since that very first Army Deal I bought back in 1991.

I’ve always thought Games Workshop should have Temple variant armies as well as their Craftworld variant lists. The Temple armies would use Warlocks as HQ, Exarchs as elite squads and Aspect Warriors as troops, with a few other choices thrown in.

My Aspect Warriors are all painted on a scheme that involves three colours. Where I have more than one model of the same pose, I try to either modify them, or paint variation, rotating the colours around the armour. I’ve also constructed and painted dedicated Wave Serpent transports for each temple, but more about them later.

My Swooping Hawks (Fast Attack) have needed extensive modification and this was where the multi-part Guardian plastics started to come into their own for me. As mentioned previously, early Games Workshop Eldar used lasguns and laspistols, the Hawks being one of these groups. Over time, this weapon has become a ‘lasblaster’ and been given a much more curved shape.  I’ve tried to update some of the earlier ‘Hawks’ and create more, using the different plastics available.

The Hawk heads of the first generation models added to early Guardian plastics make for a unique look.  One of the original models remains in the group, with some modification to his weapon, using the end of some other Eldar plastic to make it less like an Imperial lasgun.

The Dark Reapers (Heavy Support) have changed, particularly when looking at the headgear, but the essential components and size of the model remained the same over several generations. My thirteen Reapers are from two different generations, not the latest versions that you can get, which look a bit like guitarists to me. The only big change to the unit was the alteration of the Exarch weaponry. There’s two Exarchs. The one with the Shuriken Cannon is the standard second generation Exarch, the one with the Missile Launcher is a first generation Fire Dragon Exarch converted with a missile launcher from the Wave Serpent weapon sprues. The end of the Firepike fits with it quite well.

There’s a limited number of poses in this group, but I painted them in the same colours, rotating them to make them more individual.

The first generation Exarch was armed with a Web of Skulls, this was a fantastic item, but it disappeared from their listing, turning up in the Swooping Hawk Exarch options list instead in the fourth edition codex. I quickly repainted my Exarch and converted him to have Hawk Wings, but in the next codex, the weapon disappeared completely. 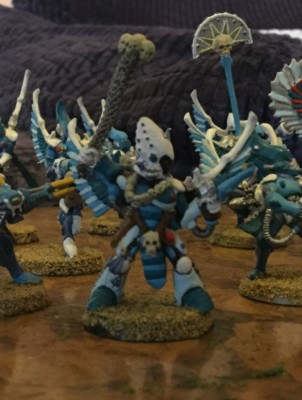 Before it did, I managed to get a game or two in using it. The Swooping Hawk squad became something of a delivery system, sacrificing themselves for the Exarch to get a chance to use his weapon as many times as possible.

The model still works as a Swooping Hawk, so I keep him with the squad in the cabinet.

The Fire Dragons have got a little bigger and bulkier over time, but the models still work together as a unit really well. I have three different generations of them and field them as a mixture. Additions to the Exarch weaponry have given me a reason to buy new models, to give my army options. 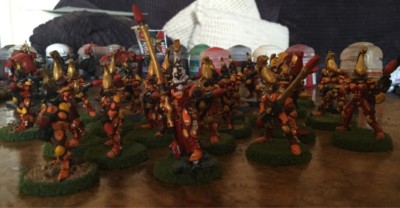 The Fire Dragons are a first choice for any time I’m choosing to play Warhammer 40K. The addition of a Wave Serpent transport delivers a mass of Fusion guns into close range, which is a hard hitting tactic.

I have three generations of Fire Dragon models, giving me a total of twenty three Fire Dragons (including three Exarchs). The originals are from my Army Deal C in 1991 (mentioned in the first blog article). Over time, I’ve supplemented these with the second and third generation sets. The second generation came out with Warhammer 40K 3rd edition and have an added face plate, plus two Exarch models. The one with the Firepike I don’t currently have, but it is a very beautiful sculpt. 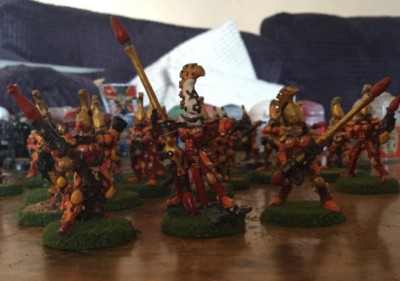 The third generation Fire Dragons came out with Warhammer 40K 4th edition and very much took their cue from the second generation Exarch. The armour is bulkier and the models are slightly larger, but not enough to be a problem in a squad where they are mixed in with the older miniatures.

The Striking Scorpions also went through different iterations in look.  The changes were subtle, they second generation having more of an agile look to them, the third generation are bulkier and heavier. I don’t have these. I’ve kept the squad as one unit with two generations of models. I have the original Exarch model with the ‘Biting Blade’ and two of the subsequent ones, so changes the arms a little to vary them was important. The modified ‘Scorpion’s Sting’ was created out of necessity as the Exarch model was missing part of his army. However, the elegant pincers look pretty good.

In my early armies, I would field Scorpions as my primary close combat troops. Whilst they weren’t as hard hitting as Banshees (with their power weapons), the Scorpions tended to last longer because of their heavier armour. This became particularly important against Genestealers. 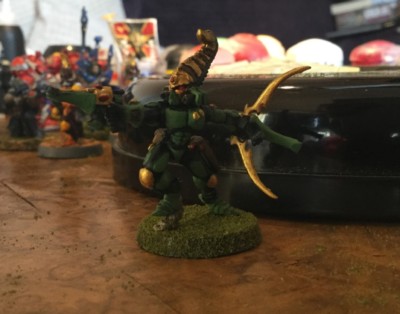 The first generation Howling Banshees originally had laspistols and the Exarch had a Power Axe. Subsequent editions of Warhammer 40K have made most power weapons the same, so the Exarch went back into the ranks after his laspistol had been replaced with a Shuriken pistol. The same modification was made to all the other Warriors and again, I used colour rotation in the painting to keep them different from each other.

My group of Banshees are from all three generations of miniatures.  The second generation are a little ‘space opera’, but fit well enough when given the same paint scheme as the others. 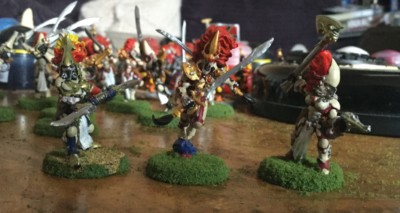 The newer Exarch models offer choices of weapons for a battle. The Exarch wielding the two handed bladed staff (the Executioner) from the second generation of models is my favourite of the group. The third generation models include an Exarch with mirror swords. There is no model wielding the throwing knife Triskele, but the Phoenix Lord Jain Zar seems to have one, and I’ve a few ideas on making a model with one in the future. 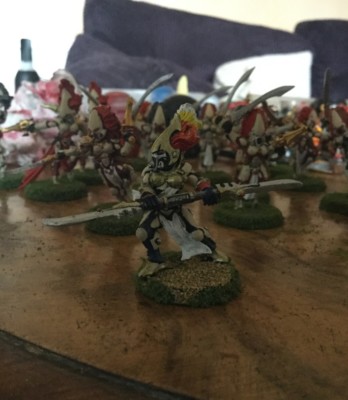 The Dire Avengers were one of the most modelled and remodelled ranges in the Eldar list. The original concept came from the pre-craftworld warriors, featured here.

These models were all in my original “Army Deal” as Battle Guardians. The Dire Avengers I had were the first named generation from the 1991 range, but the new plastic ranges of Guardians with the upgrade kits for Dire Avengers were much better and completely different. I held off and waited until the full plastics boxed set was released in 2006, then retired my old Dire Avengers.

The Exarch weapon options are all accounted for in the plastic boxed set. However, I created on Exarch before the box set came out using a Dark Elf head and Guardian body. I made robes to wrap around his legs. I still have to add transfers to the banner on the back of the other Exarch.

When the Dire Avengers plastics came out, I was able to return to this character and add a few more details. The Avenger plastics also gave me some nice torsos to use for my custom made Autarchs. The personal force field option of the Avenger Exarch on his left arm is also a useful addition for making Autarch models.

In the next article, I’ll take a look at some of the other Eldar models I’ve collected.”