Welcome to week three of Squaduary!

We are now on Stage 3 of the process, our basic is hopefully on and we are ready for details:

3. Clean up and details: 15th – 21st
Cleaning up your colours and picking out all the bits to make the mini stand out.

The Seraphim have their bases painted and are ready for the girls themselves to get a coat. The dino-bikers have bases done, and the dinos themselves have been basecoated and drybrushed (except the Sister Superior who is just basecoated). The next four days will be painting light, but hopefully this has gotten me far enough ahead that this won’t be a problem. 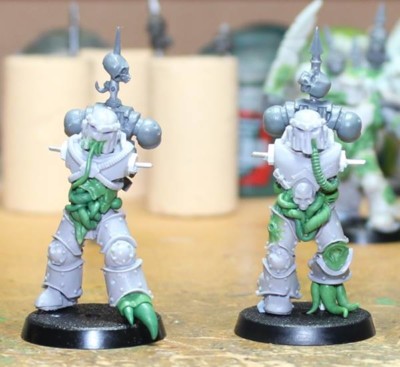 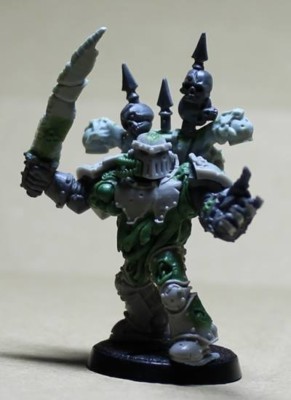 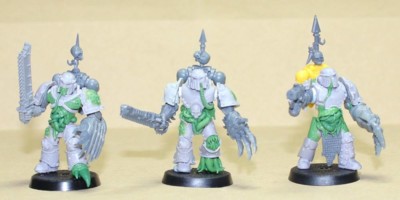 Progress on #Squaduary so far: airbrushed and washed… 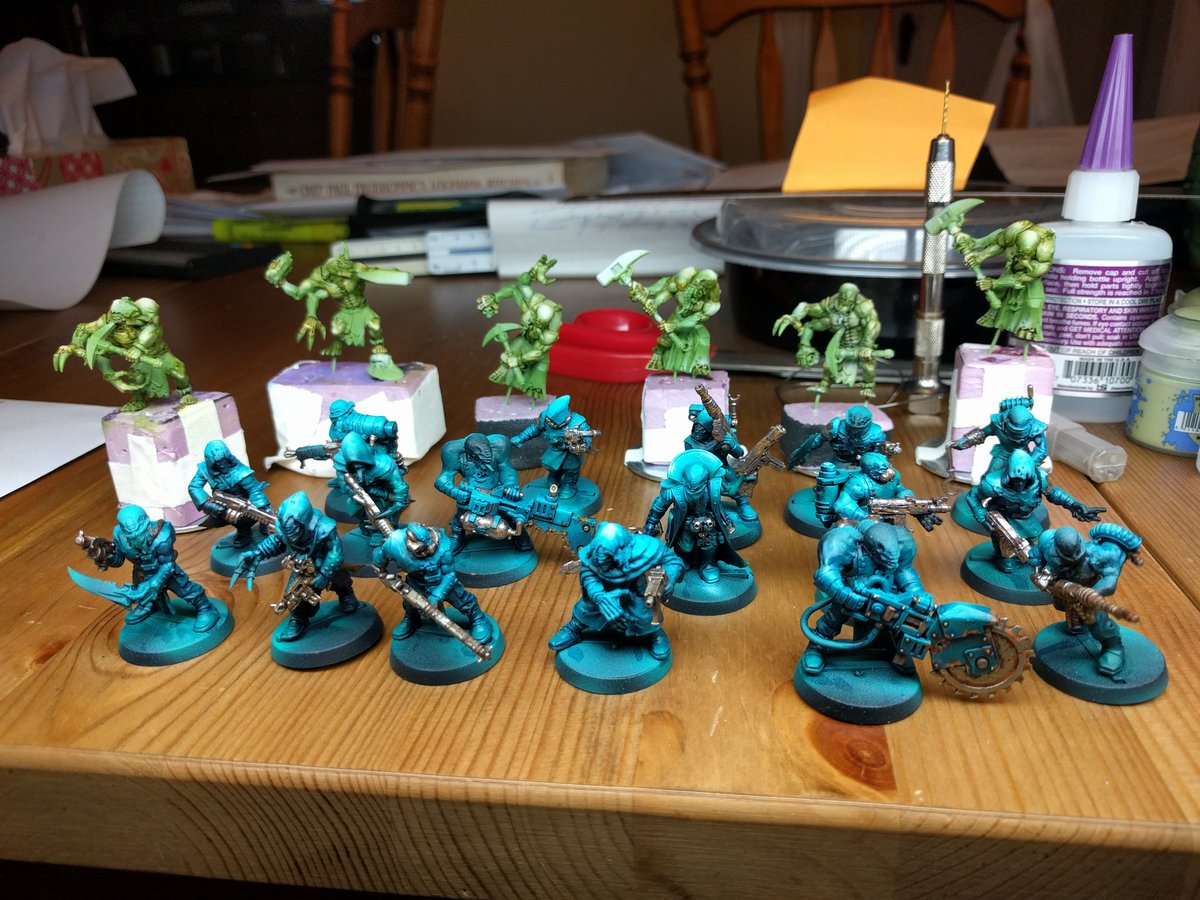 … And a shot of what I still want to complete. 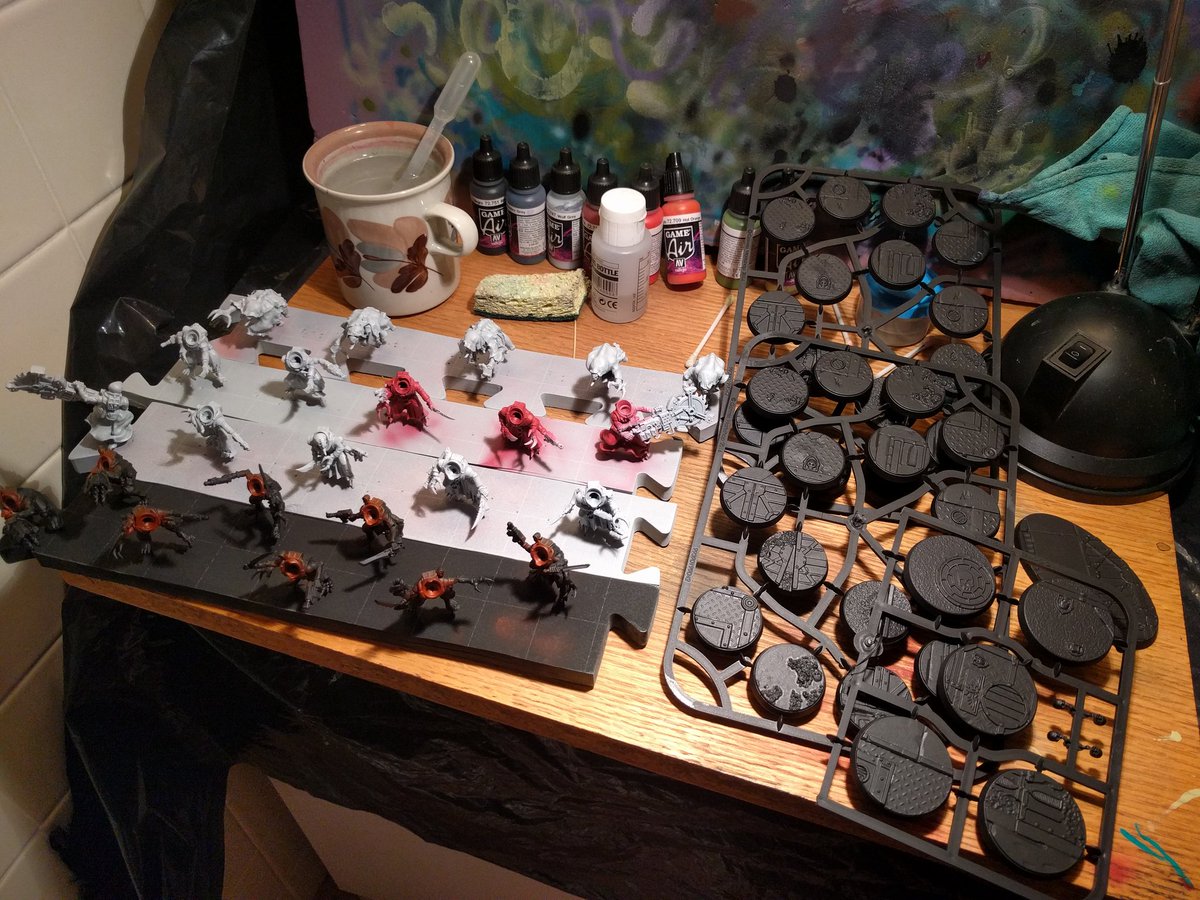 I think a combination was found that works for these models.  They’ve taken a lot longer to paint than expected.  These models don’t fit the Sylvaneth aesthetic like the other models so it’s taken a while to figure out what works.

The base colors have been applied, although a fair chunk detail work still needs to be added – mainly small stuff, such as belts, badges, cuffs, and so forth.  I went for a good mix of orange jump suits, possibly representing a ‘liberated’ group of prison inmates and other salt of the earth.  In short, it is not that impressive as of yet, but I am hoping to bring everything to life come week three.

The first half of the team is almost finished with all the highlights. After highlighting the orange towards yellow, it works a lot better with the purple armor. I did finish the middle lineork as you can see below and on the rest, I only have the purple and black left to finish.

To begin with, my Squaduary pledge.  Oh, the shame!  I reckon I’m the only one behind in my work– and I’ve only got FOUR chaps to do!  It’s great to see everyone else’s, though.
The fellow I was going to make a company champion has sort of turned into a musician, and the company banner might be the last thing painted, but we’re getting there.  By inches. 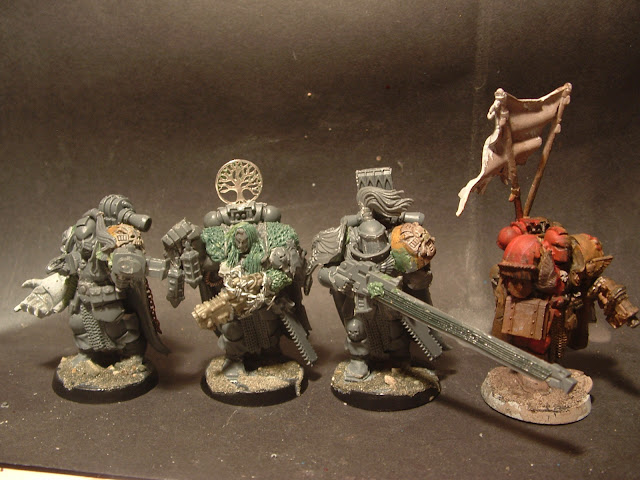 I love everything about the Scourge, from their gorgeous models to the rules and weapon options they can take. My conversions are fairly simple, just mainly head swaps and a few weapon modifications, but even though I use them in nearly every game I play with La Danse Macabre I am always putting off painting them. I think this is because I do not have a fixed idea how I should tackle them in terms of colour combos, and the wings are a bit daunting tbh. Well, no more procrastinating, I will submit them as my entry for Squadary and hopefully be able to get through the by the end 🙂 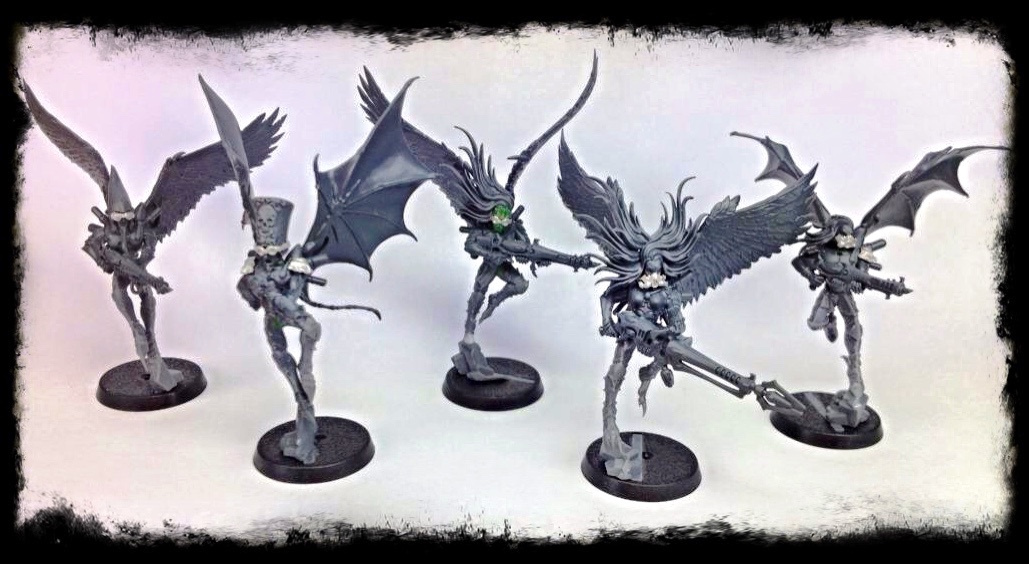 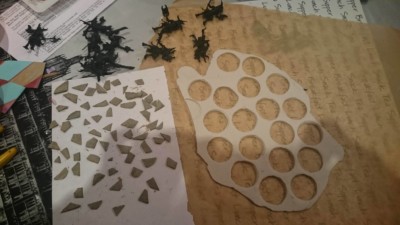 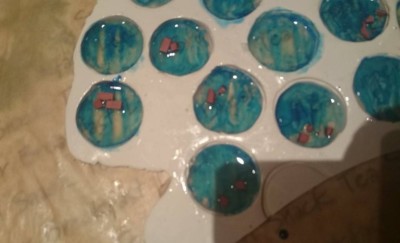 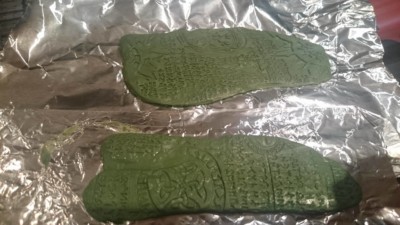 The more attentive will now notice I’m doing 2 squads not 1. 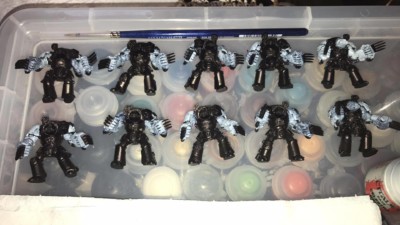 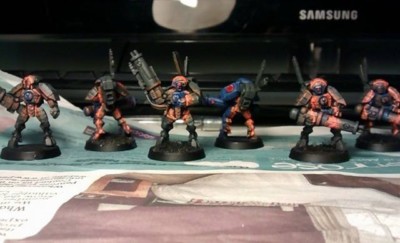 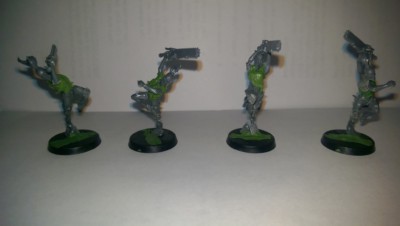 Edge highlighting is NOT a skill I have easy access to.  I’ve been a dry brusher first and foremost when it comes to highlighting. An older skill I’m doing my best to leave behind so I can learn new technique and advance my skills with miniature painting. Clearly for black power armor, the go to technique is edge highlighting these days.  So I set to with a gusto…with only a couple hours to paint per session, and only a couple sessions per week, I was managing two marines a session…ack.  The family stomach flu prevented any acceleration of this. Cautions and a bit messy here and there, I when fairly timid with the high lights using a single layer of Vallejo Grey Blue. With time, I’ll go back with a second pass of something lighter on the high spots.  But this was all I could take for now.

Cracking on through Squaduary and I’ve finished the first of my Raptors. Well, apart from the base but I’ll do them at the same time at the end. The rest of the squad have had most of their base colours blocked in too so I’m pretty hopeful that I’ll get the squad done in time. 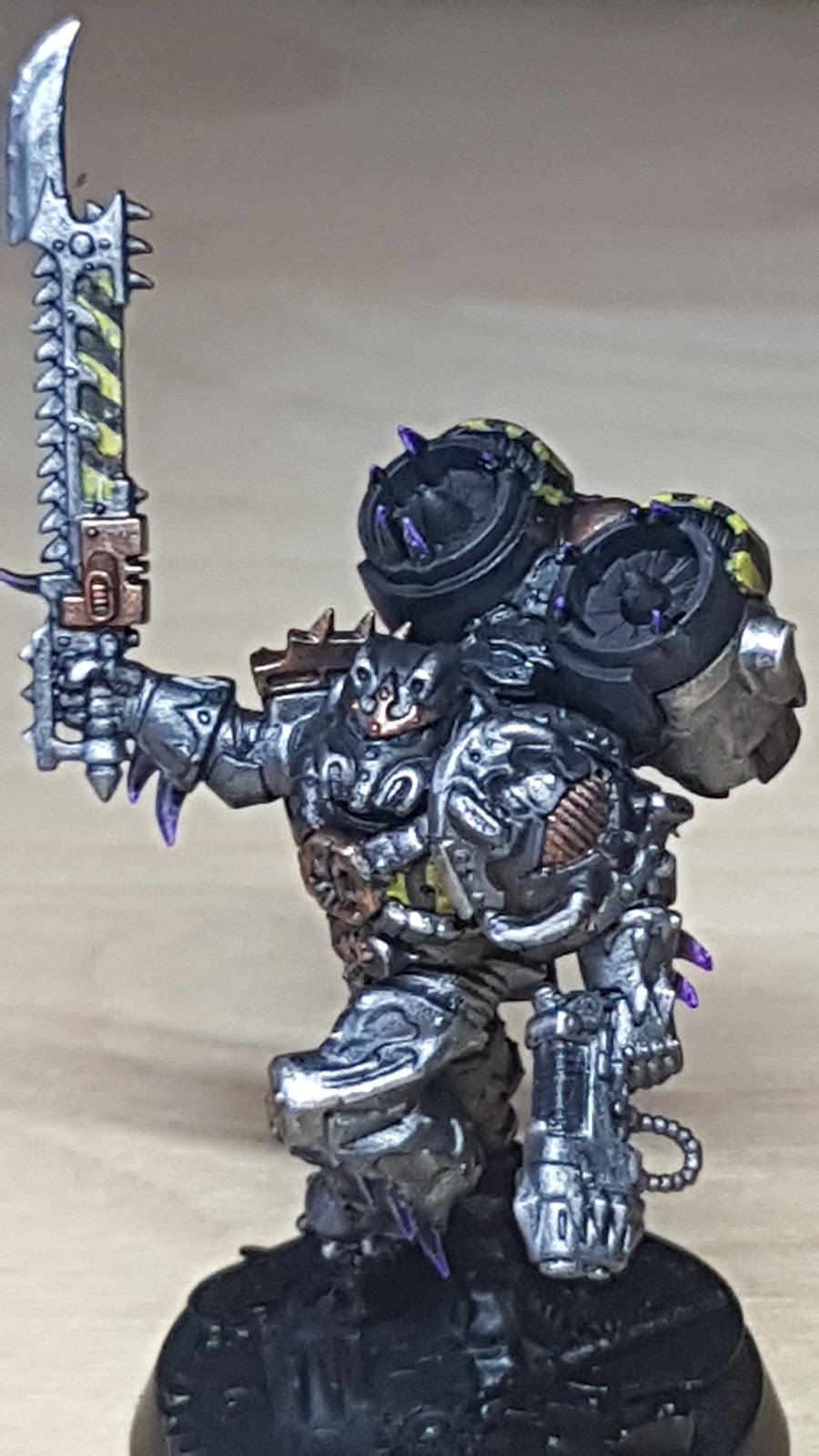 Got the majority of the painting done for my Deathwatch Veterans. 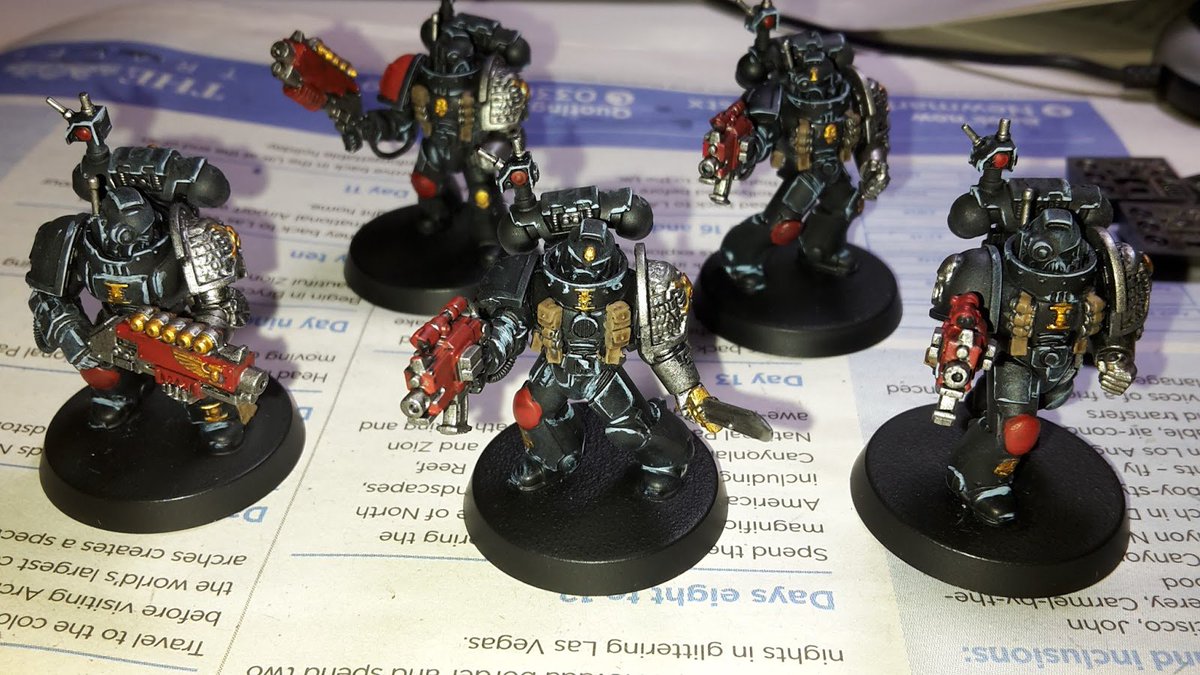 I’ve pledged a 5 man unit of Space Wolves in Tartaros Armour. Entering the second week of February I’ve got all 5 of them built and based, with one complete bar his storm bolter. Should have at least another 1 finished by the end of the week.

Week 2 ends, and progress has been made! 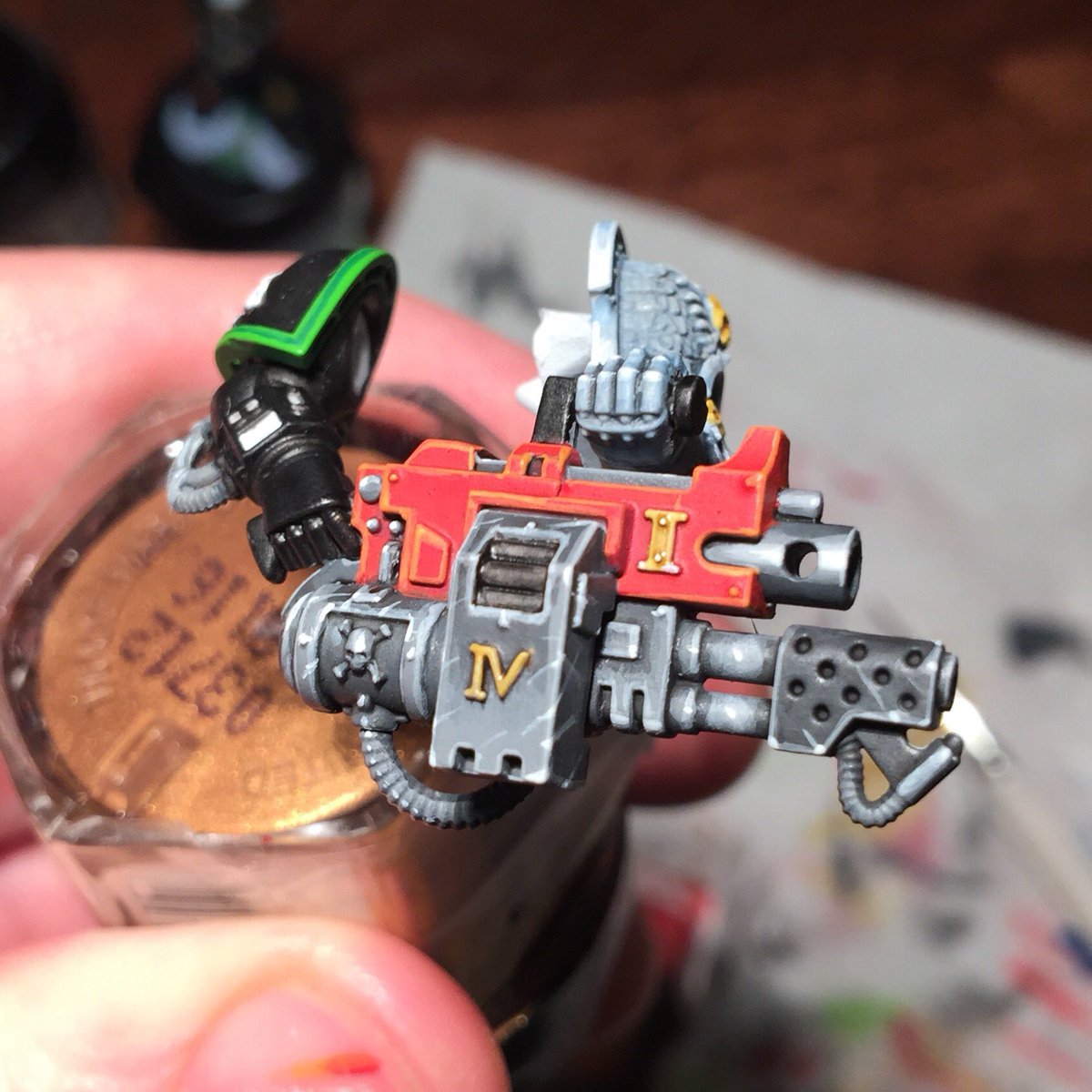 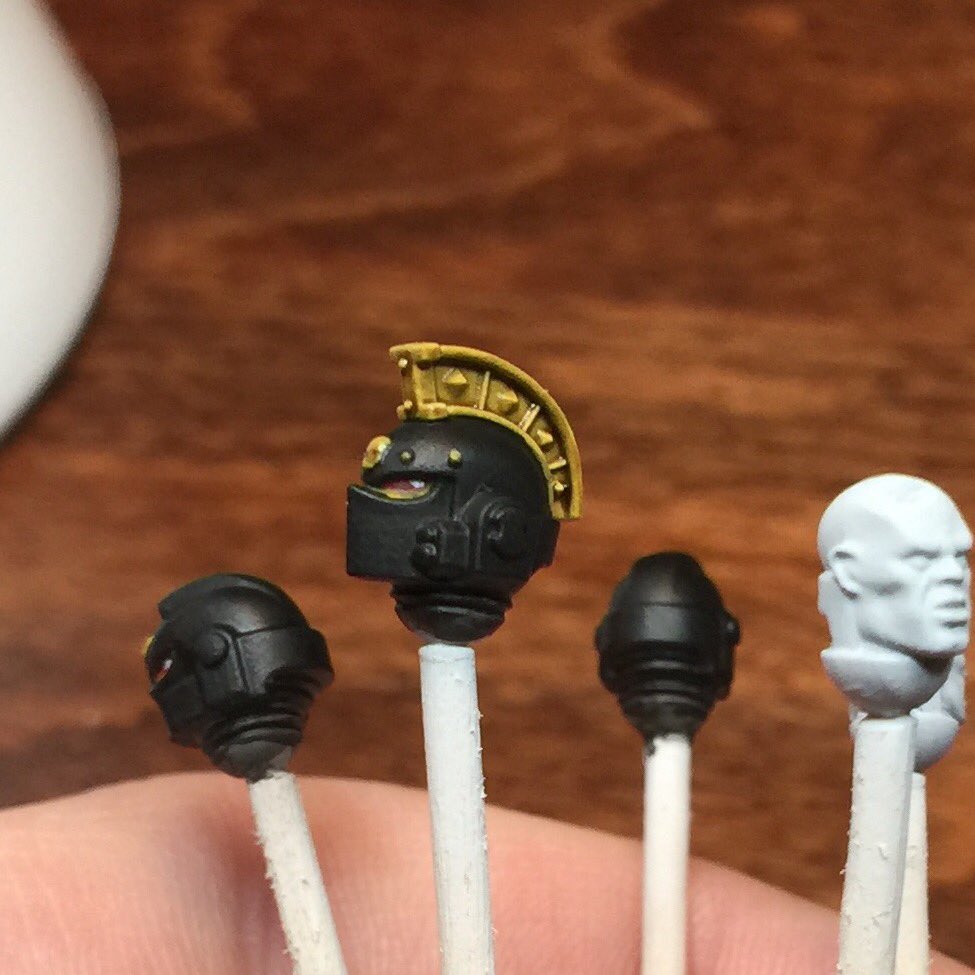 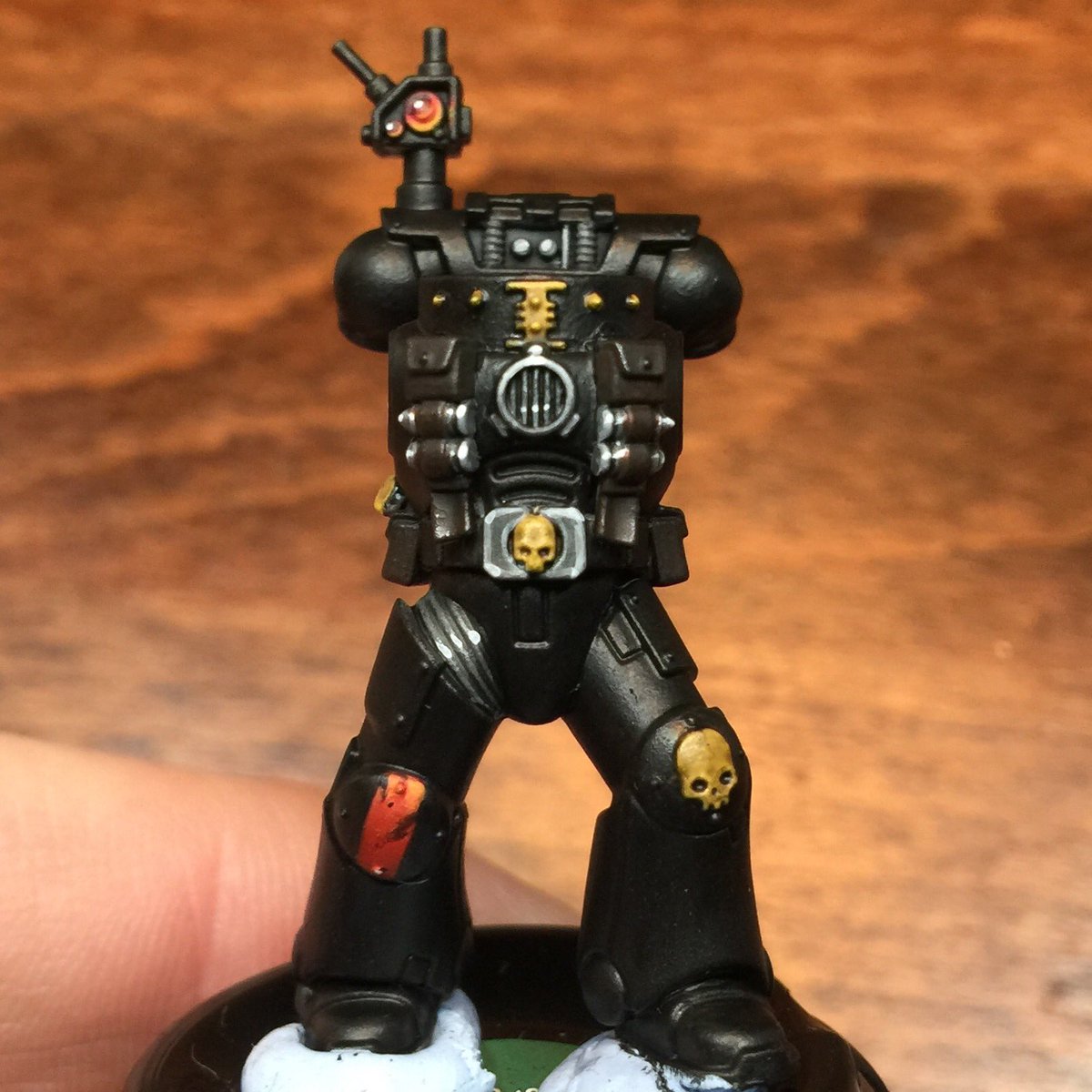 Not much progress, but progress nevertheless. First layer of elf flesh over rotting flesh on vampires 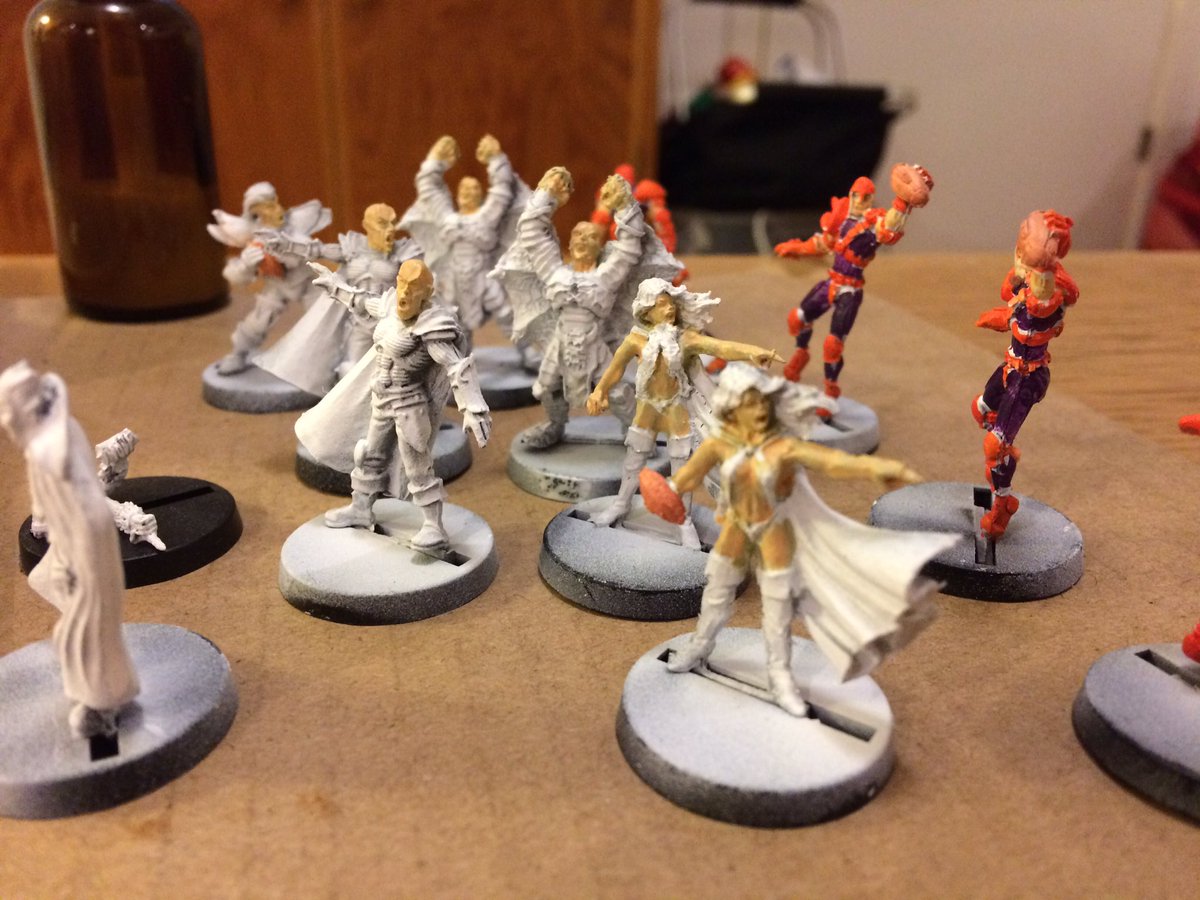 Trying to hit my week 2 deadline of #squaduary and getting the base coating done. 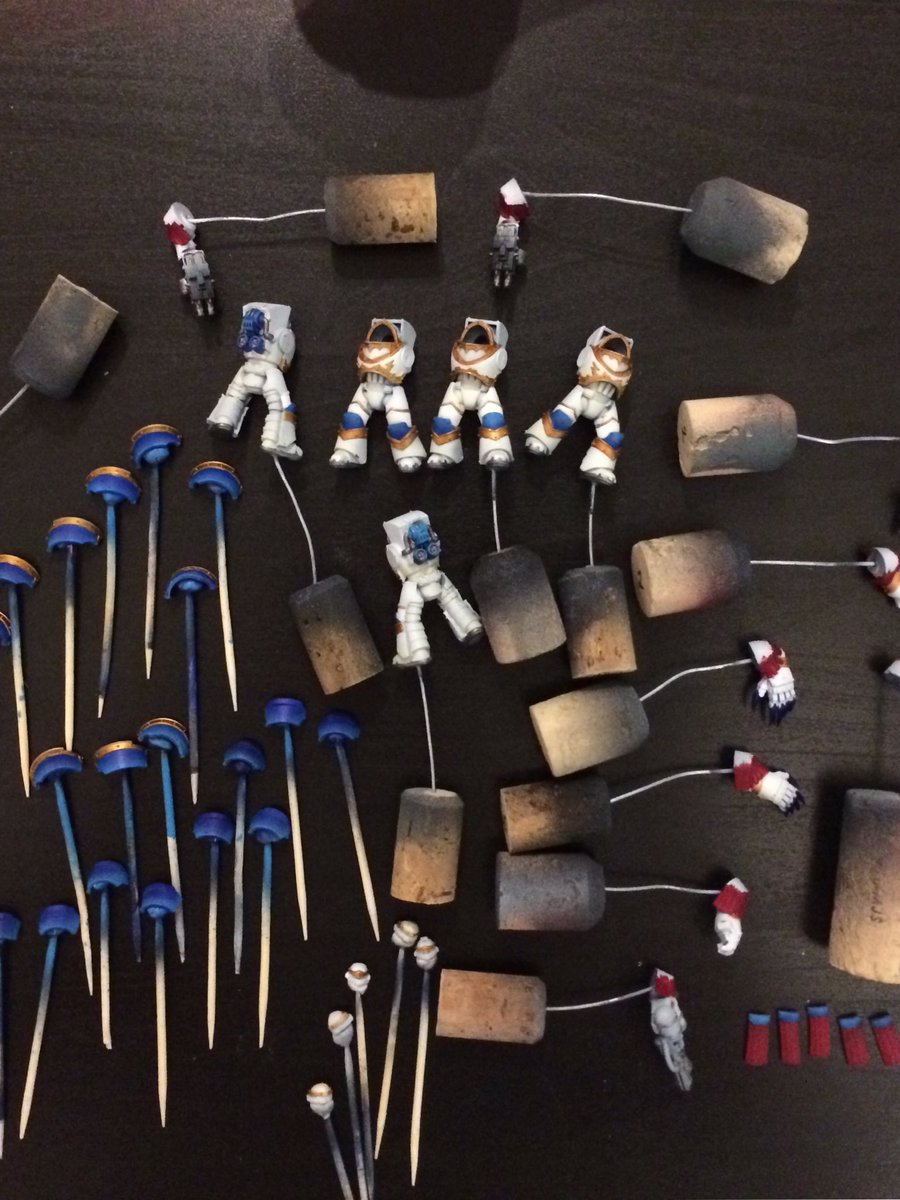 Ok, they’re only a five man squad and the photography is horrible but in just over a week I’ve got them built, undercoated, based and made a good start on the painting to boot! 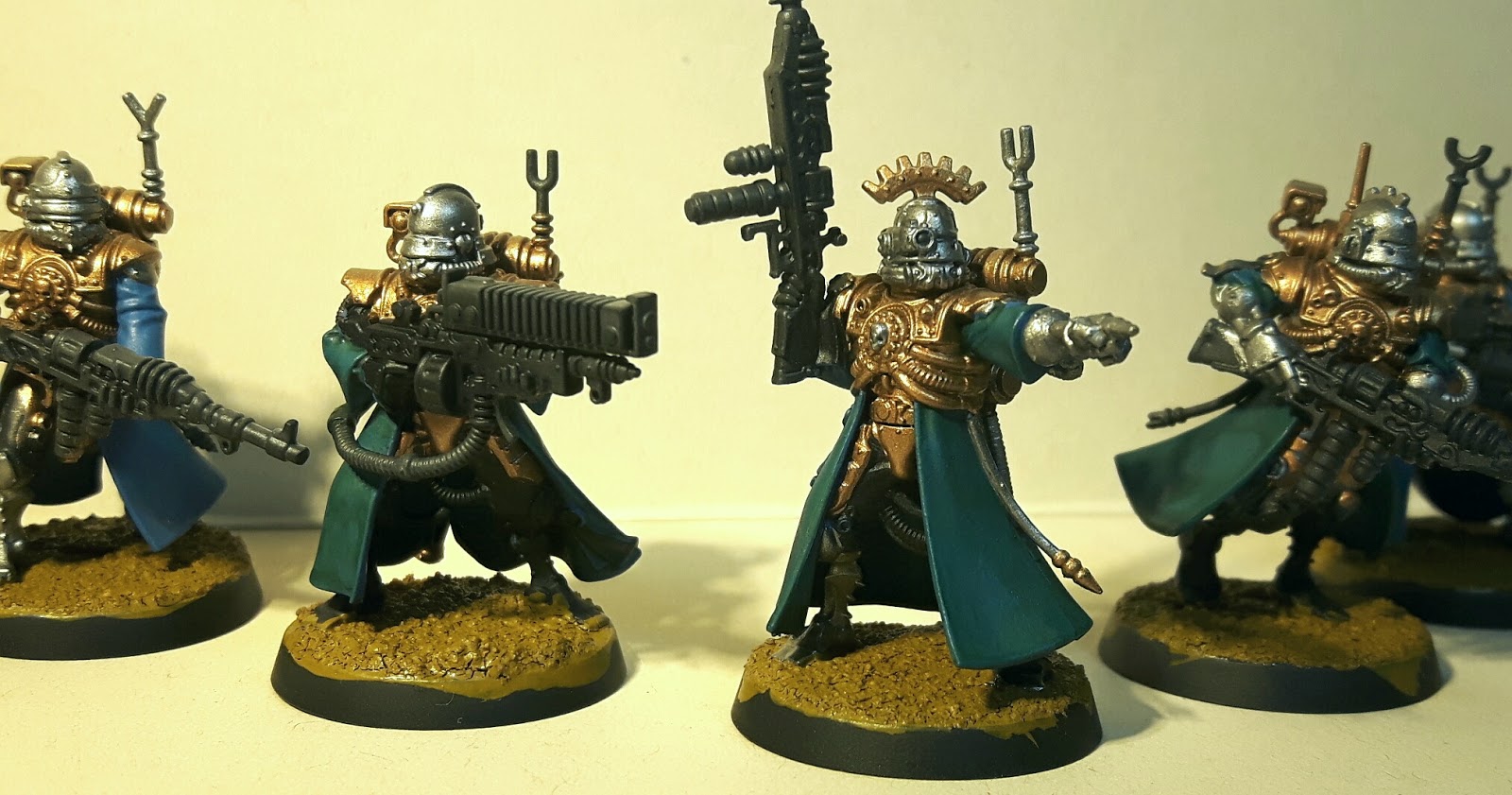 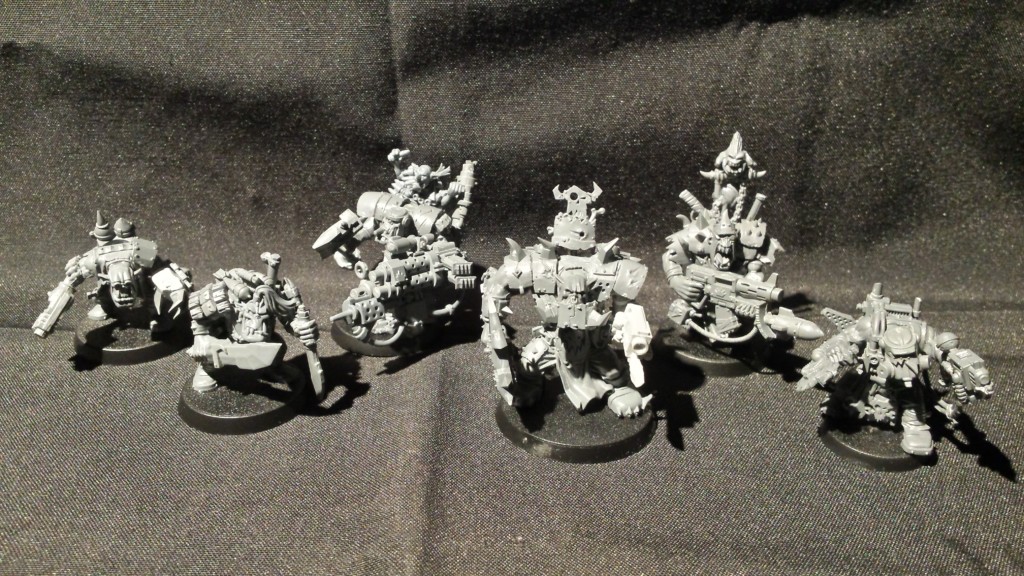 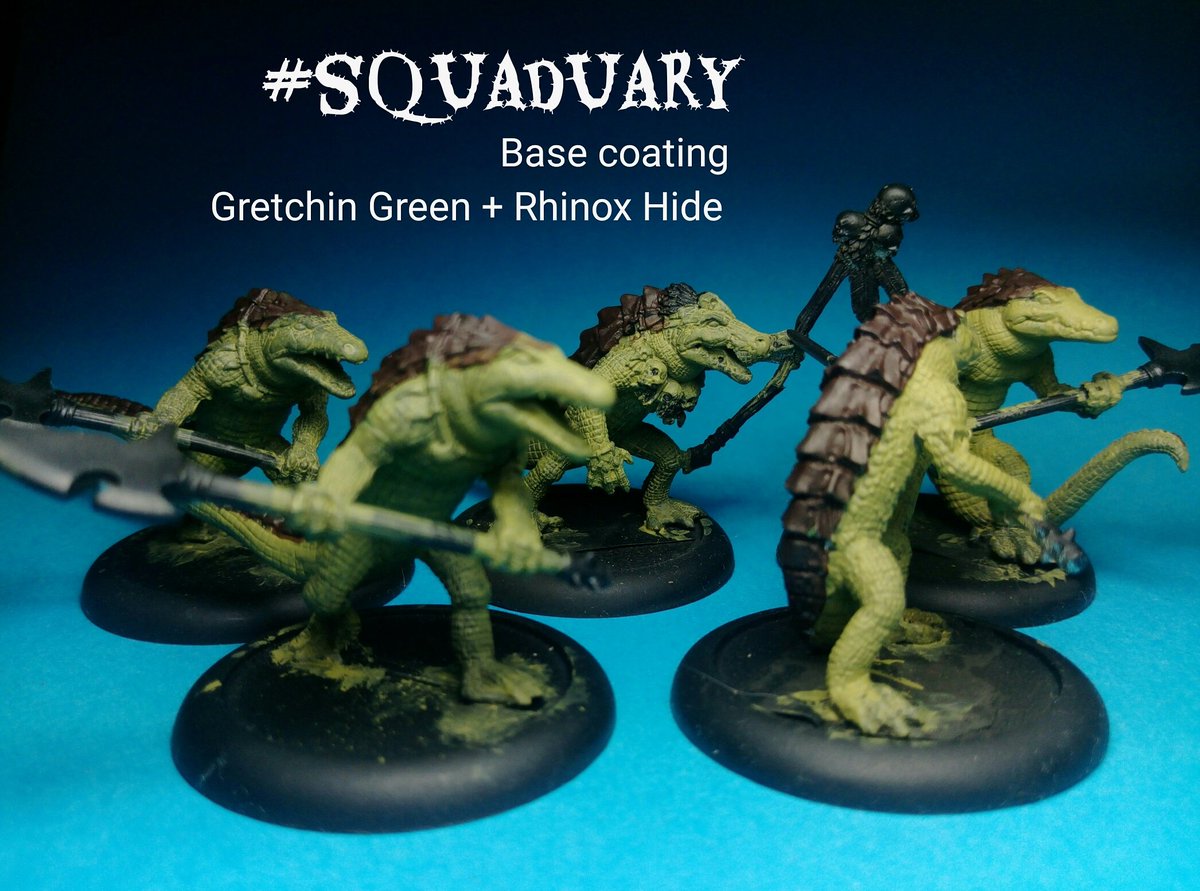 Another week of progress and I’ve managed to get half of the guys finished. I know that the official Squaduary thing is to base coat all of the models this week, but I prefer working in smaller groups till completion. This update is mostly pictures, so try not to be too disappointed by the lack of superfluous witty banter. 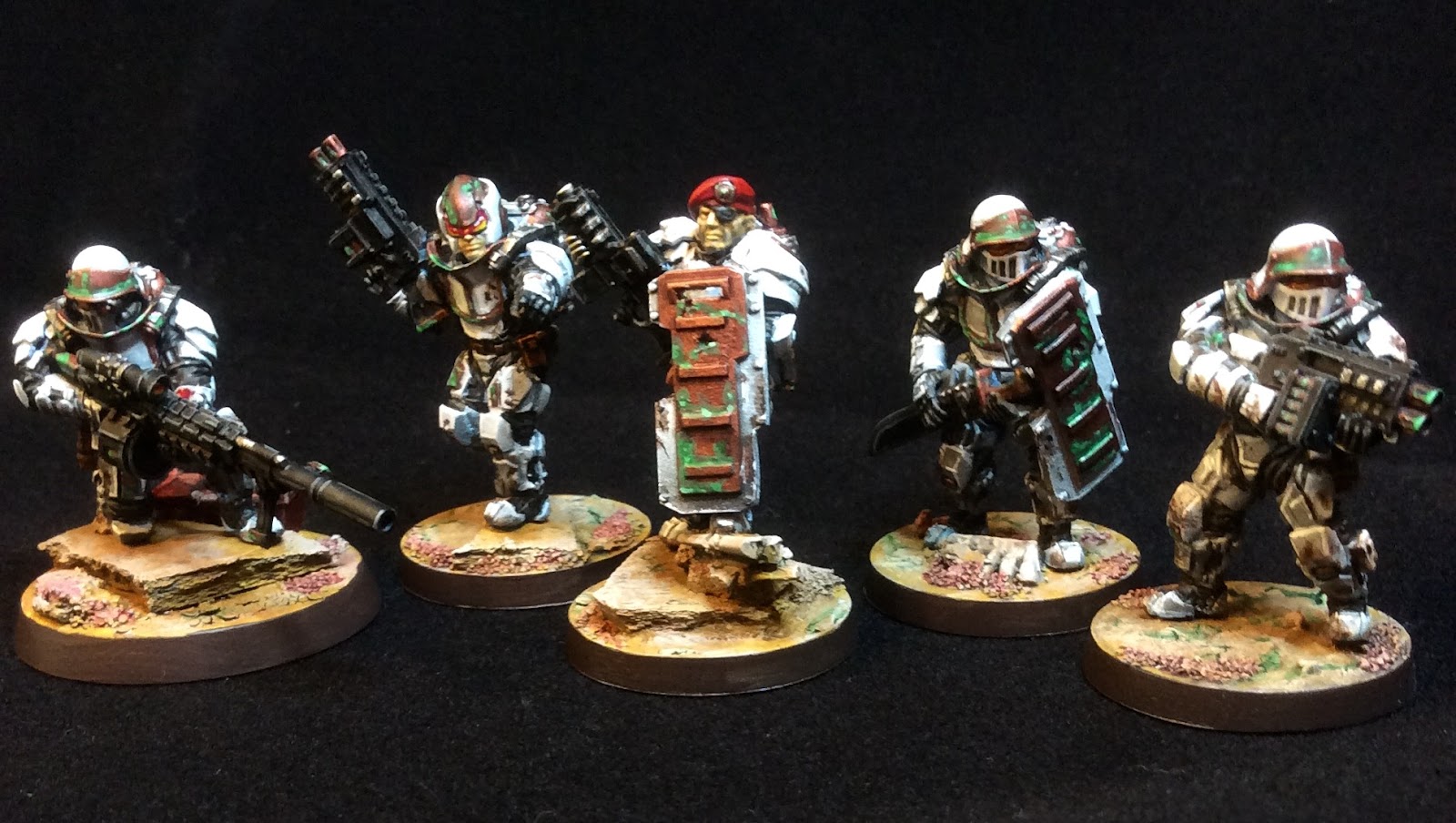 I have discovered an issue with the Squaduary concept, as opposed to Dreadtober, at least here in the PNW: In October, we can usually rely on at least a couple of days of dry weather each week. February, on the other hand, is pretty reliably rainy, or at least extremely damp and humid, which makes terrible conditions for spray priming. Today is at least sunny and clear, and the humidity is supposed to dip to the lowest it’s been for a while in a couple of hours here, so I’m going to hope I can get a decent coat on. 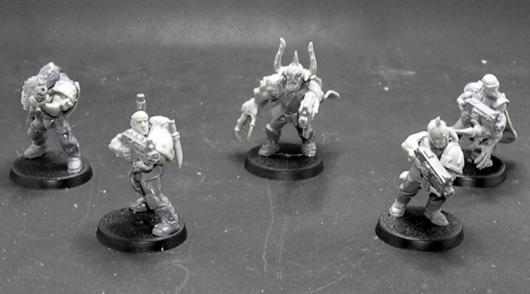 Here is the squad so far, finished the next two members of the squad now, both with a little character. The Grav Gun wielding RTB01 (I know! Awesome huh?) is armed with an alternative Gravity Gun from the 3rd Party company Spellcrow. 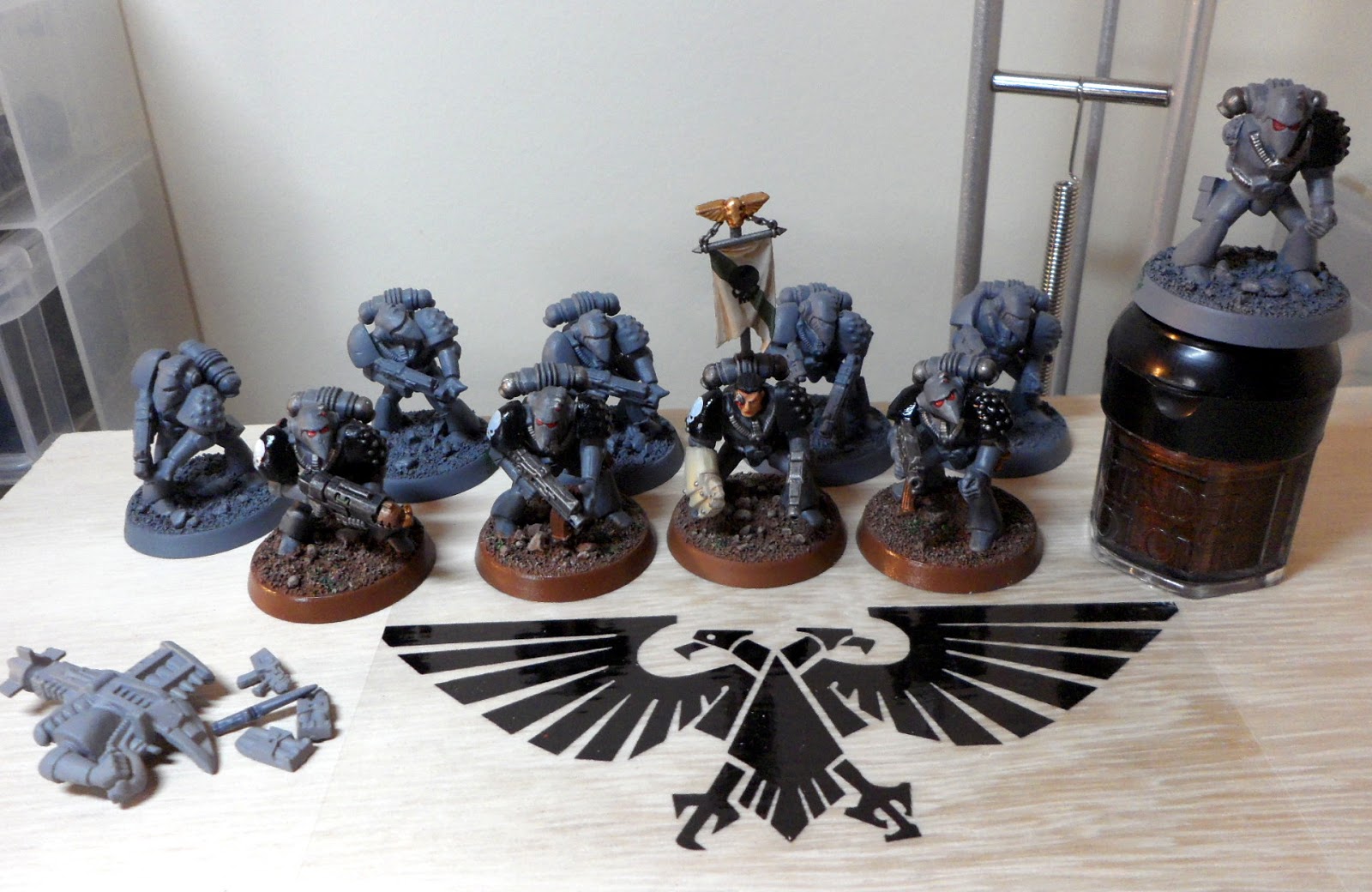 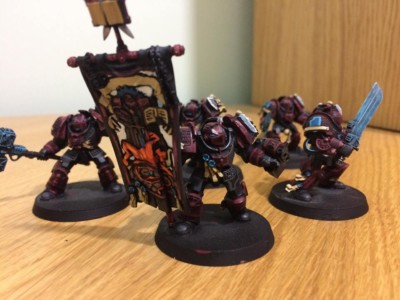 Here’s a quick update to the #squaduary challenge with my Necron Immortals.  They were stripped this morning.  As of now, they are all base coated and dry brushed with white (my main base color).  Next, I need to hit some of the details with blue and paint the rods.  I’m not sure how much details I will pick out with the blue but for now I’m content.  They almost look like statues.  I should remember this technique for when I make statues for Frostgrave! 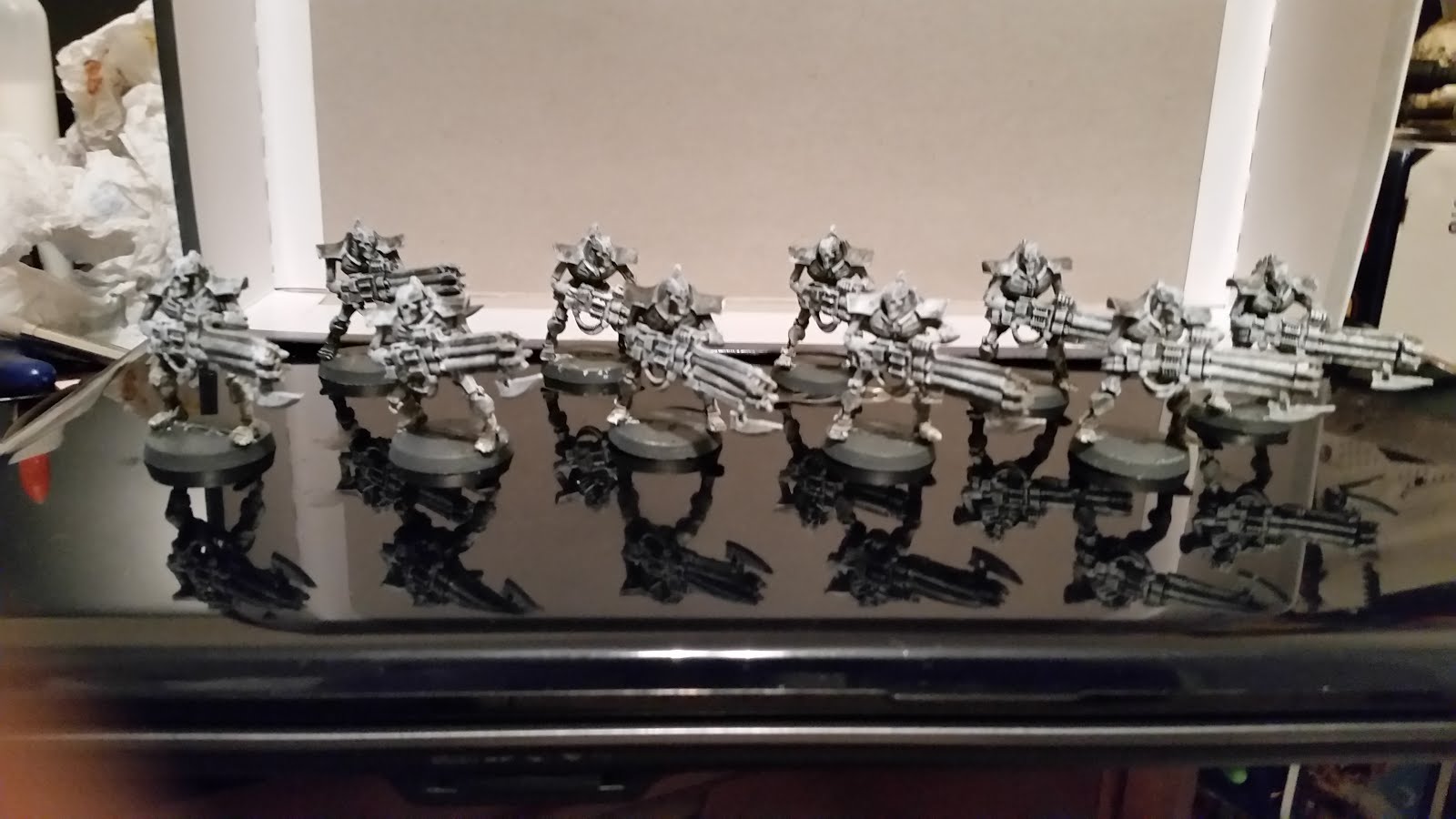 Coming along, but ran out of paint. Also, something’s wrong with Senga’s pink dress. Gotta fix it. Next: highlights!

Still a lot of work to be done on these folks. But I am liking how the colours are coming together. Running my own event and I am behind!