Welcome to Squaduary 2018 week 4! We have a fantastic amount of models being pushed through, with some wonderful conversions and paint jobs. I already consider this to be a better year than last year. Not just in volume of models but in peoples support for each other. That being said:

“All 3 Spawn, fully base coated and ready for the fun stuff like blood, rust and oozing fluids…” “Great progress this week. My own recipe chestnut ink looks great over the grey undercoat for leather effect ! Now to make my own crackle base.” “It’s been a slow week for me, it’s been half term so more time spent messing around with the sprog (including a game of 40k where he kicked my ass 7-2) rather than painting.
I’ve done a little bit of work on the riders. Just some base coating so far..
I have also learned to hate Trollslayer orange which is arguably one of the grottiest paints I’ve ever had to work with (it also tastes disgusting for all you brush lickers out there).
So yeah slow progress. I also have to remember how much of these bikers will be visible as their pose pretty much ensures that all of the front of them will be covered up by them being hunched over the bike.
I’ll do the rest as the week progresses
(Now I’m just really looking forward to the Dark Eldar Codex coming out… come on GW… gimme a date, already 😉 ) “I prefer a darker colour scheme for my wolves, picked out with bits of bling. Like the serephim sepia effect over the gold on these – coming together nicely. Still have the pack leader to do, though. I hate faces…” “As Alpha Legion are one of the most varied in paint schemes and “How do I paint the Heresy colour scheme” is a frequent internet question, here is my take. Through the stages- Black undercoat covered by leadbelcher, dry brushed ironbreaker, lighter drybrush of runefang steel. Tamiya clear blue over the top and a drybrush of Tamiya clear green over that.” 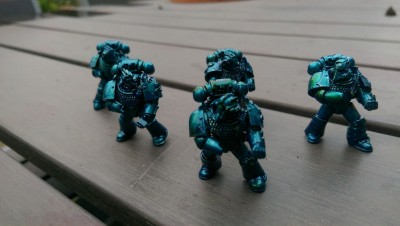 “I’ve been doing a lot of odds and ends, so mine are all at different stages. The cyberhounds (or as Dale has christened them, the flam doggos) are mostly inked now, and the pursuers themselves are halfway through basecoating. The bases are started and I’ve noticed that a common problem with sisters of silence is that the sergeant model doesn’t look very distinctive, so I’ve got a pack of cats so the leader of each squad can have one on their base and thus make it easier for my opponent than having to judge a shiniest axe competition each time.” “I got two more plaguebearers done over the the holiday weekend for the February Squaduary Painting Challenge. This brings me to three complete of the ten I need to get done by the end of the month to have a legal squad, and ten of twenty to fulfill my own Cloud of Flies Codicil to the challenge.” 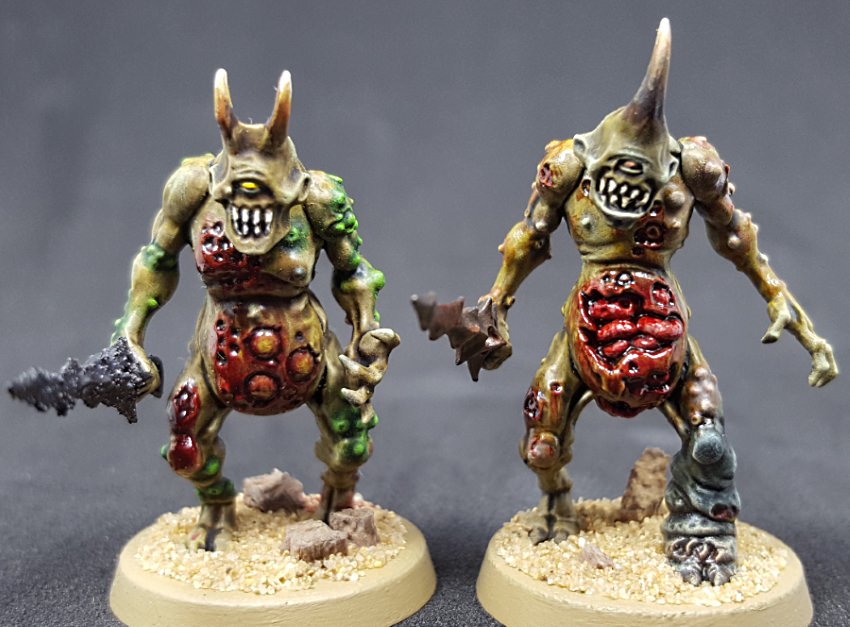 “With most of the obvious colors painted in by the end of week two, week three progress is not so obvious to make out. Many hours were spent though and these Dark Angels creep ever closer to field readiness. Week four will be exciting. I must finally complete the armor edge highlighting (seen partially complete on the front left marine in the pictures) which will be time consuming. Then decal the right shoulder pads and complete all remaining highlights and touch ups. I may not see every planned detail done, but I am confident I will close out Squaduary with a respectable squad none-the-less.”

“The third squad week is here, if I do not publish anything for the second one, but with the GT GT from Valencia it happened to me and now it seems too late to do so, and I’m going to present you the mortar squad that is already finished.” (Google translate mangled his words on me – Rory)

“Three quarters of the way through Squaduary and things are looking pretty good. I’ve got two of the three models completed and have made a good start on the last one.” 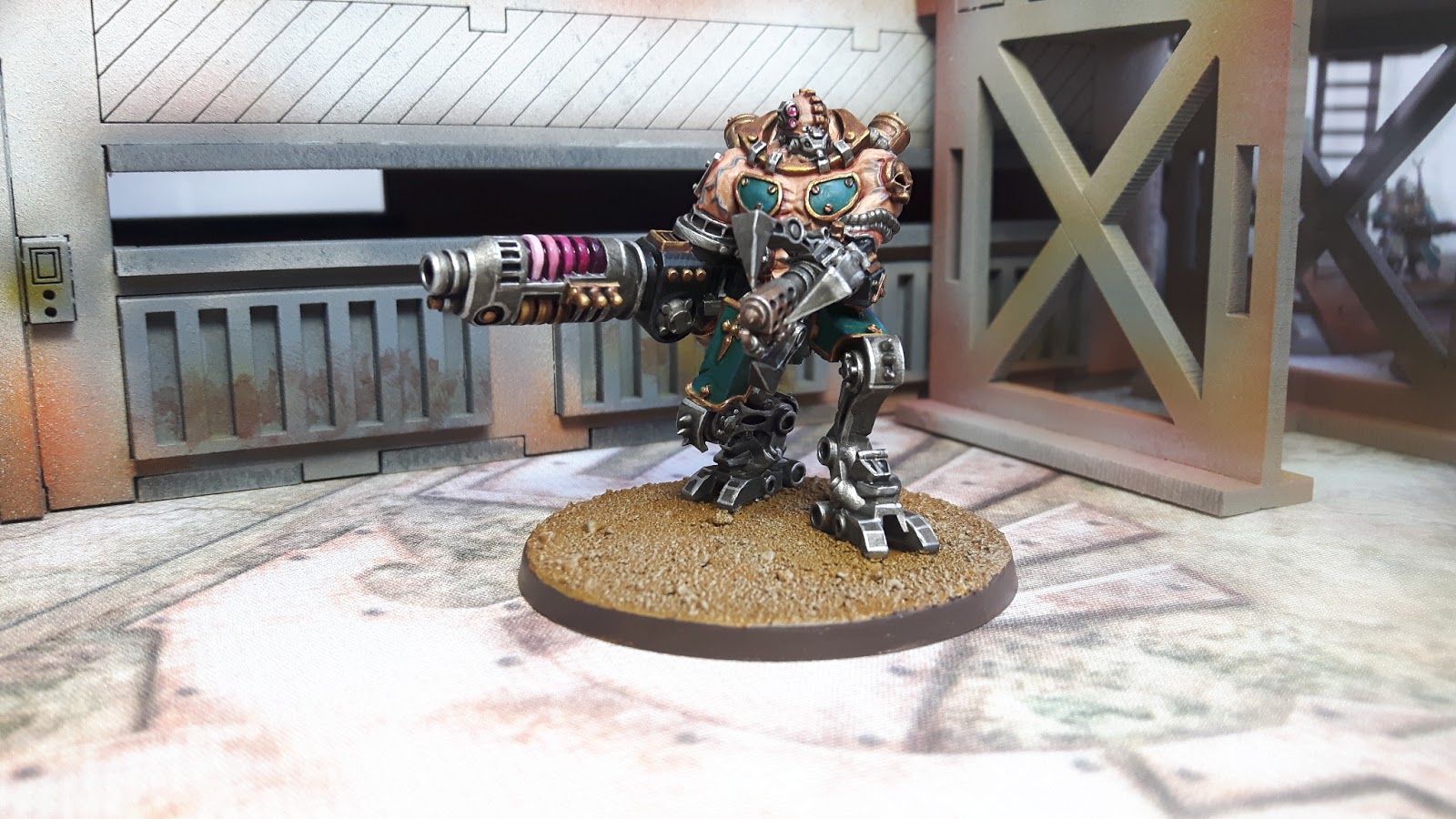 “For my first vehicle, I wanted to make something interesting and unique for my 40k Skaven without it being completely unrecognisable when the army goes to war. This conversion is probably about 90% Onager parts with just a few additional bits. A lot of it was jostled about and repurposed though to make it work.” 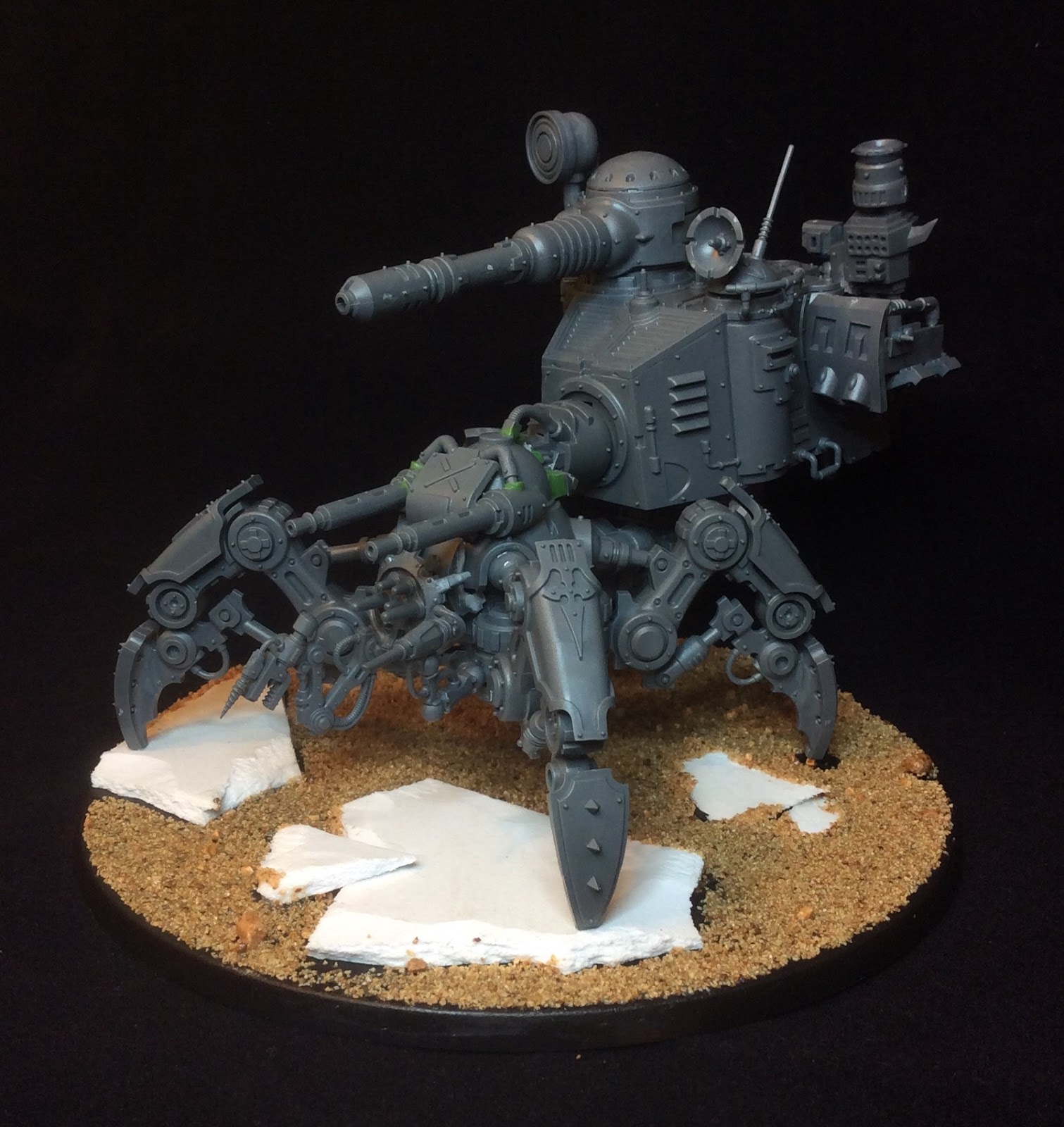 “Given a few modifications, theses conversions would also be suitable for Age of Sigmar for use as Jezzails. For my purposes, I’m using them as Transuranic Arquebuses for my 40k Skaven/Mechanicus.” 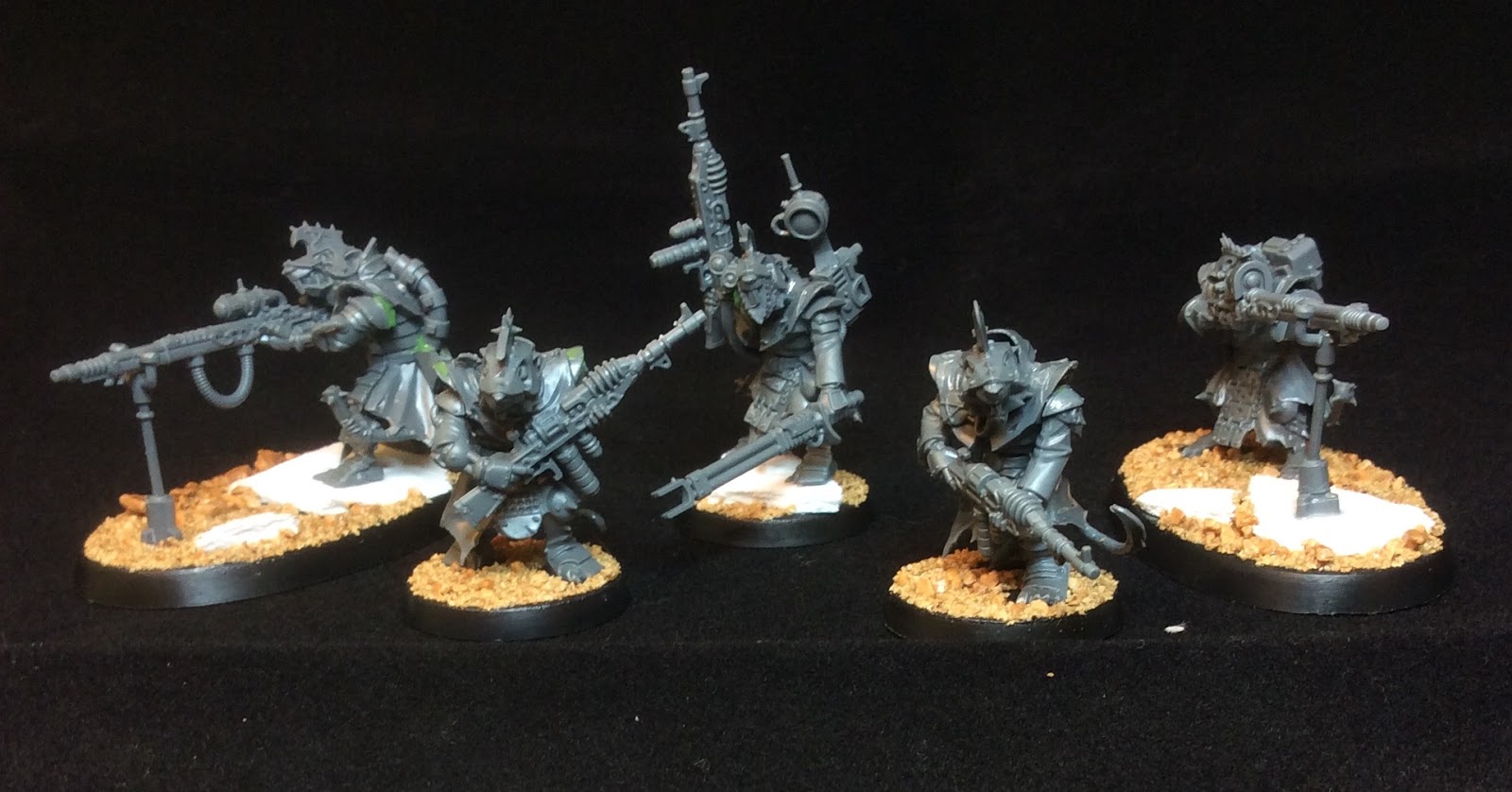 “This week, I continued to work on my genestealers for #Squaduary 2018. They are getting closer to being finished with only highlighting, claws, and bases left for me to finish. Let’s take a look.” 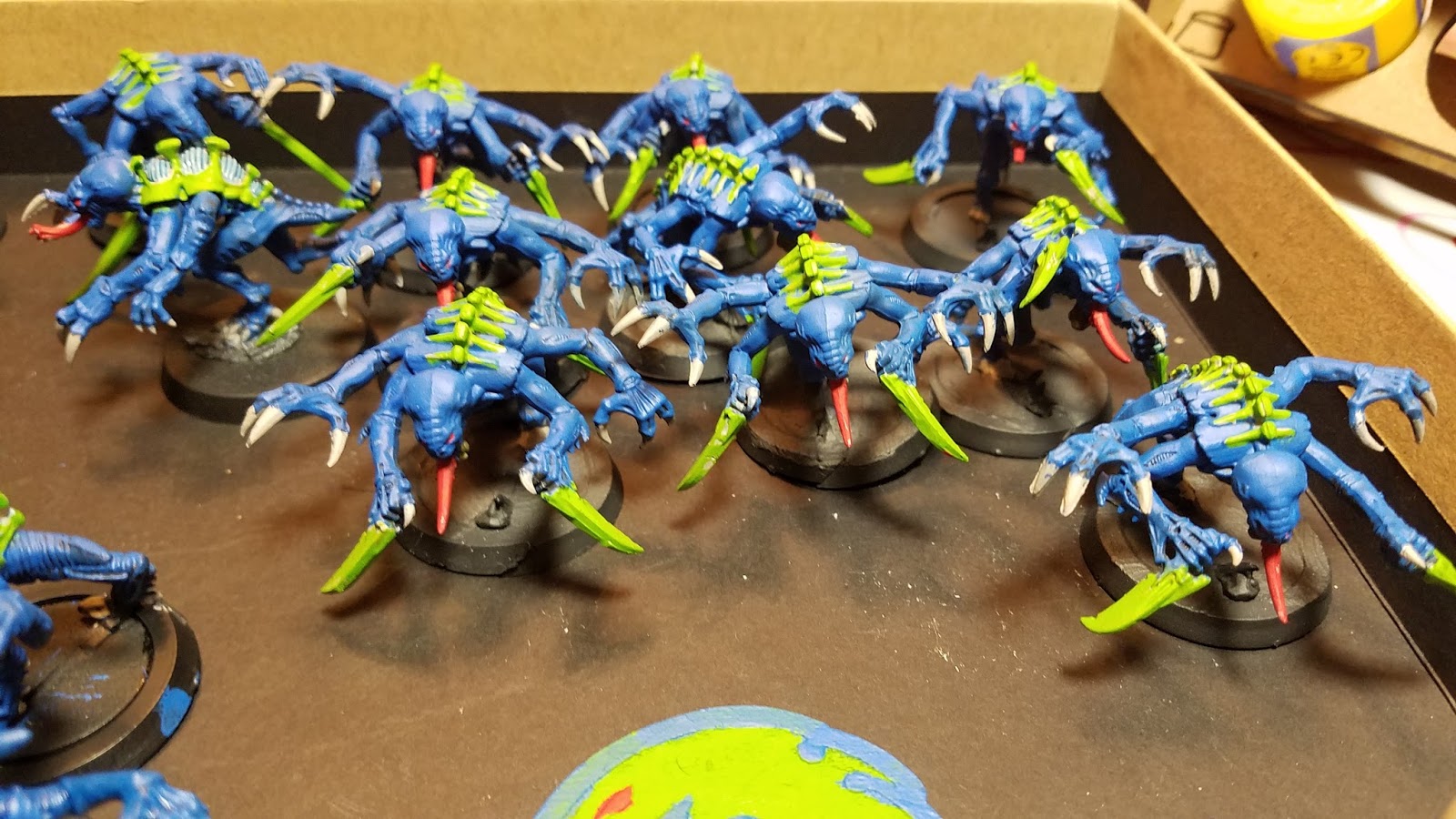 “I made really good progress this week which I am happy to report, only bases left to do. Squad Cato is now at full strength and has all its Marines present and correct. My new favourite is the hazard striped chainblade accessory Bolter armed Marine! Although front row, second from left has really striking eyes :)” 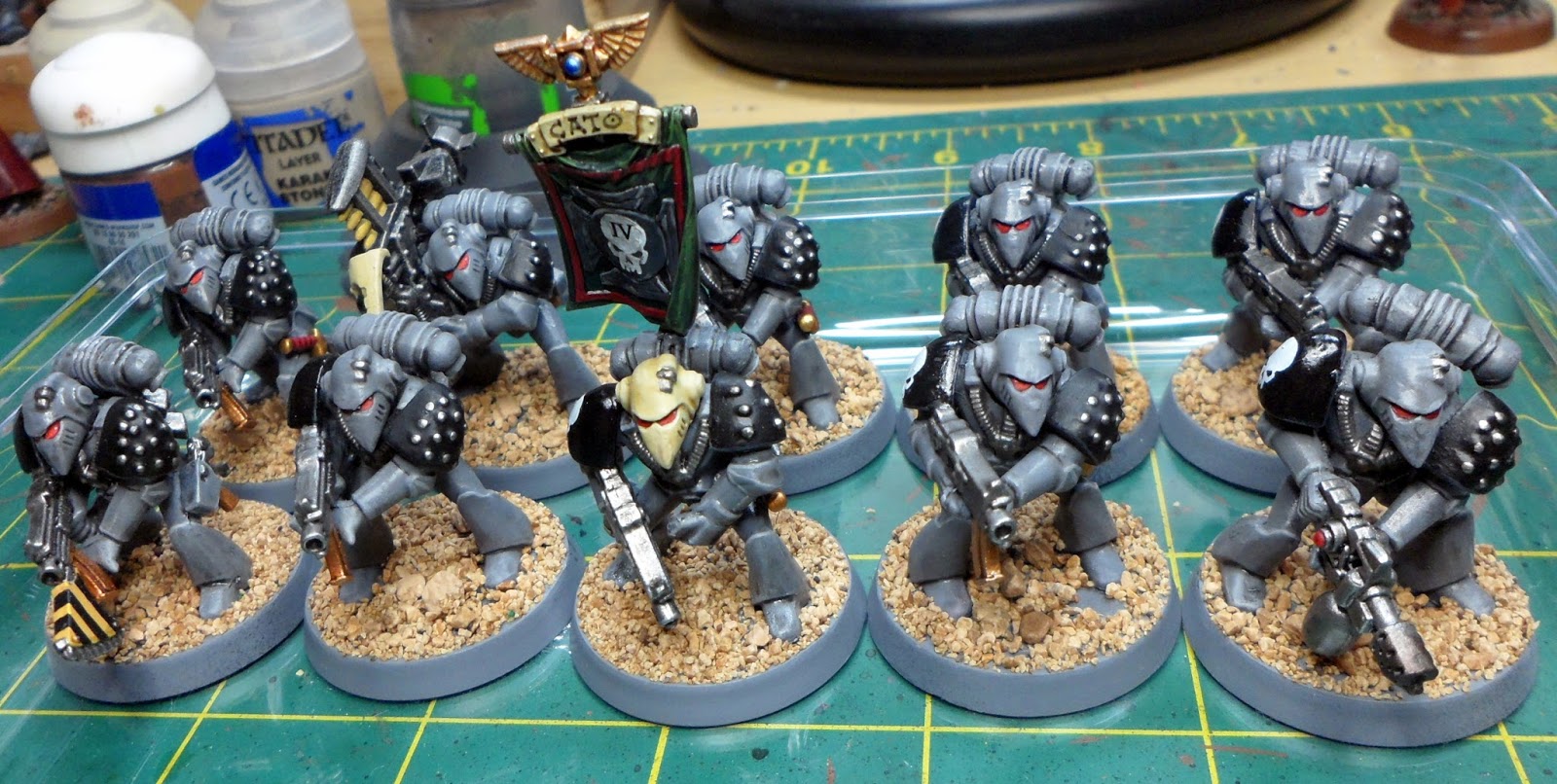 “Progress goes well on the Seekers, tho, with the older ones built and just needing some basing work, and the newer ones wanting some gold, a little touch up on the black and purple, and a wash, then some grass powder.” 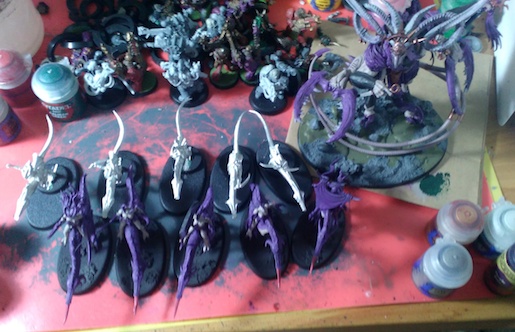 “The Imperial Fists Quad Bolter Rapier Battery is coming along well. These photos are as of last night; I’ve got the metal done and the red detailing is complete, currently working on the rest of the detailing such as skulls, lenses, iconography and cables. Once that’s done it’s just transfers and final weathering to go, so I should be all good to finish by months end.” 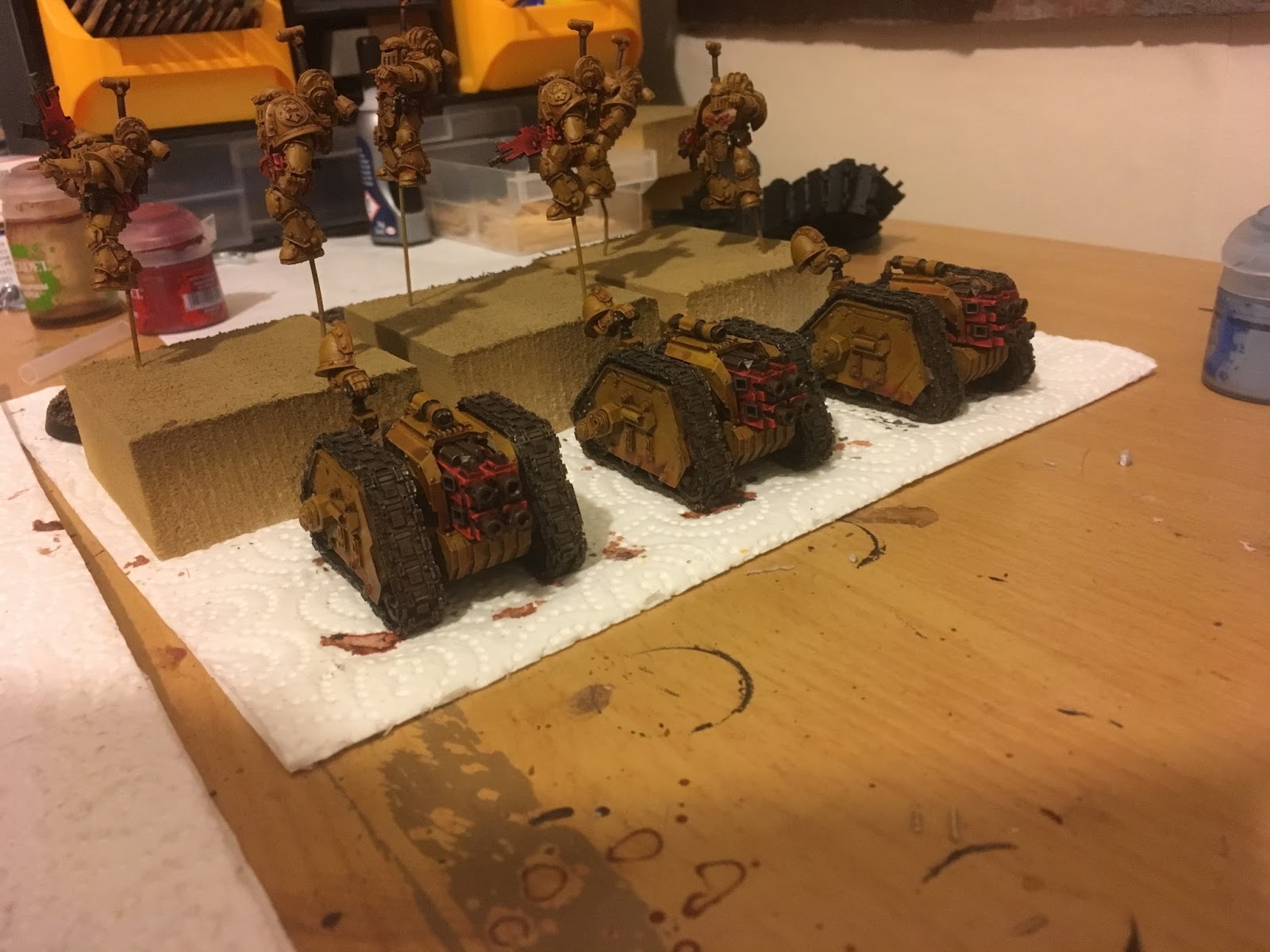 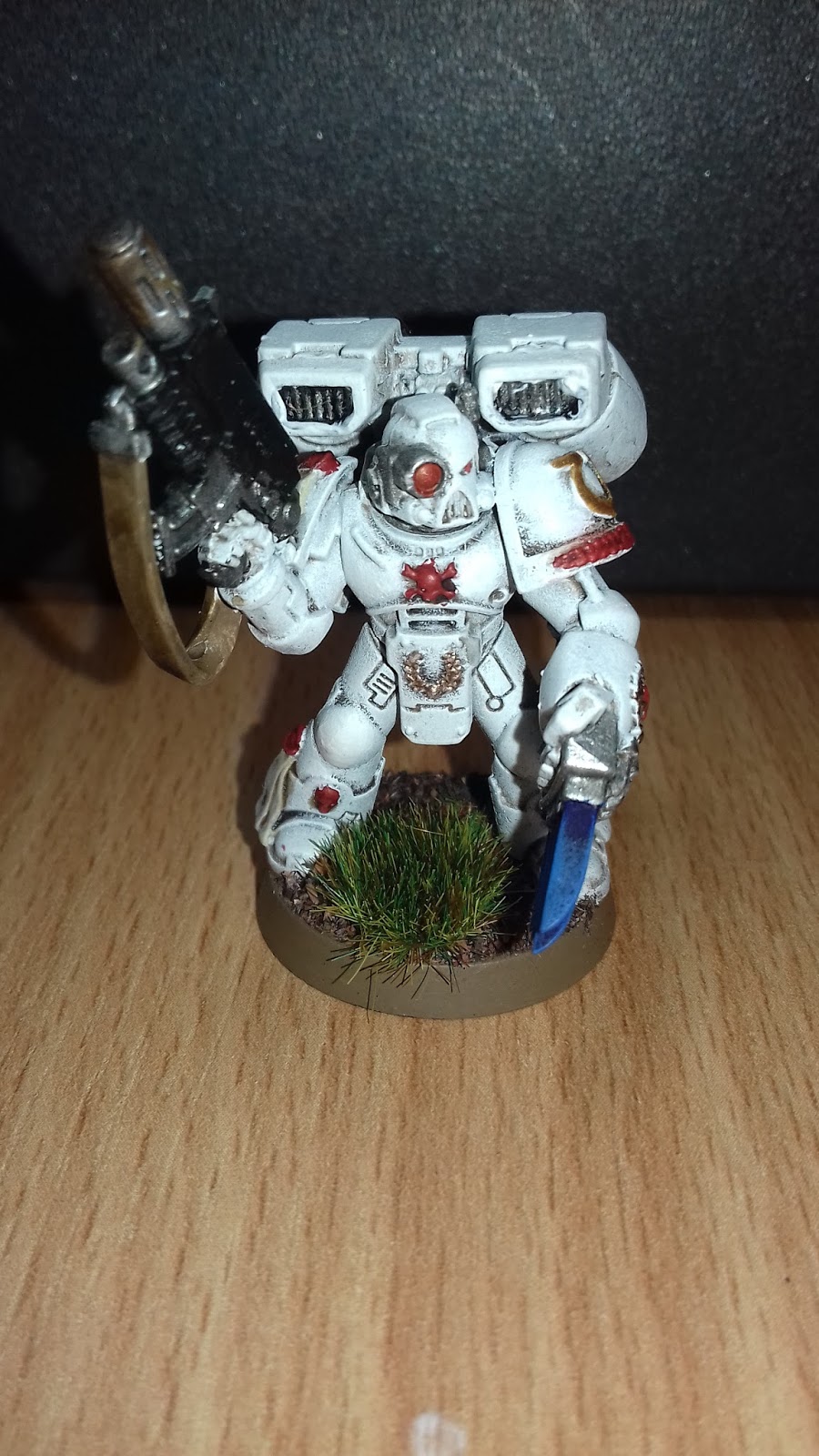 “Some catachan test models for #squaduary – feedback before I progress the rest plz? Any idea how to highlight camo easily?” 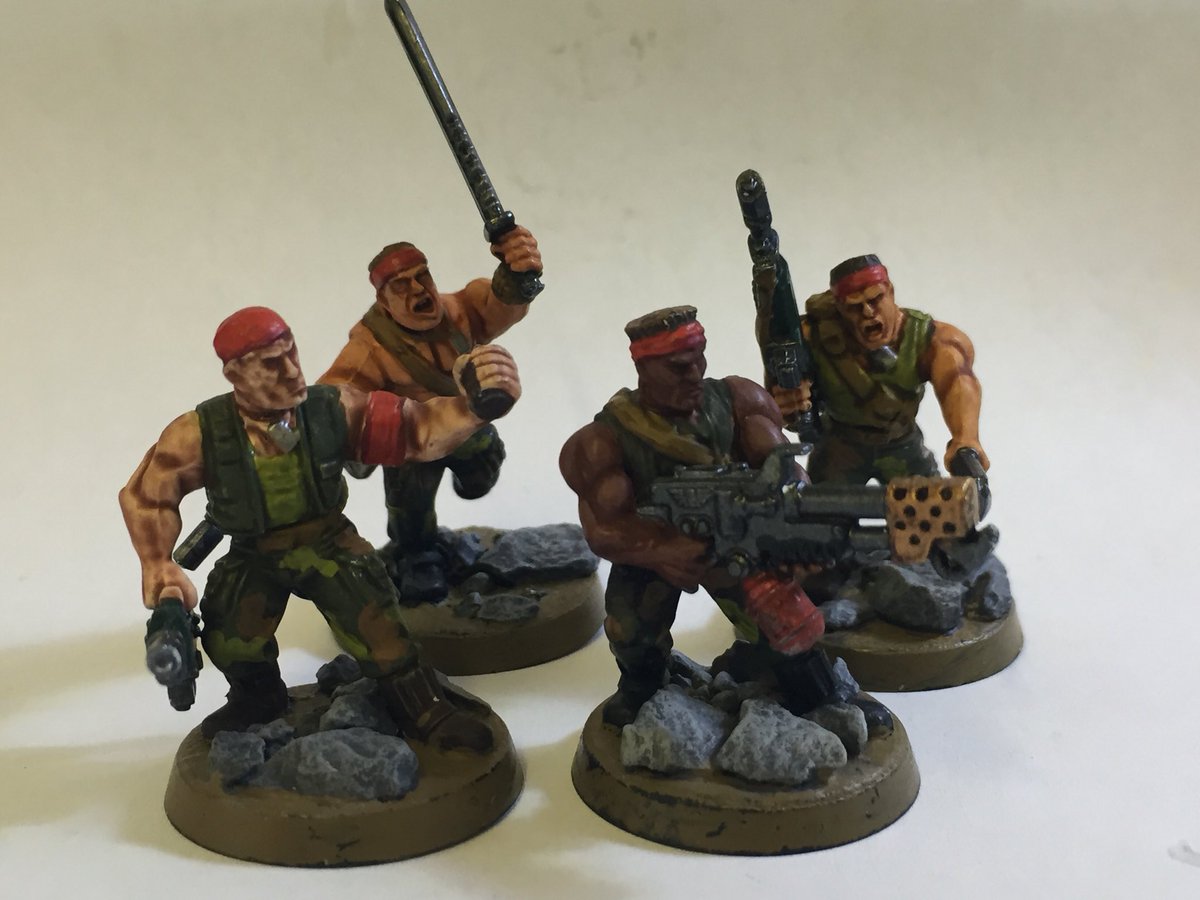 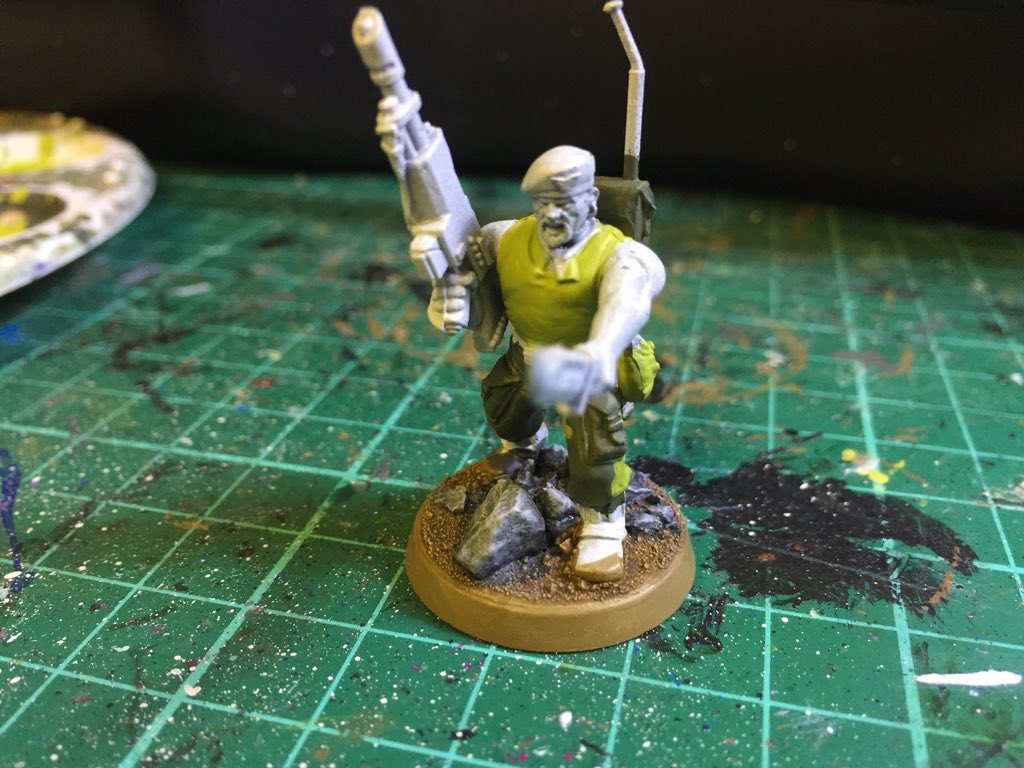 “It’s a good thing I am ahead of the game with this challenge since I lost most of the weekend playing ‘Oxygen Not Included’ instead of cracking on with my Primaris. Still most is not all and I got some more work done.” 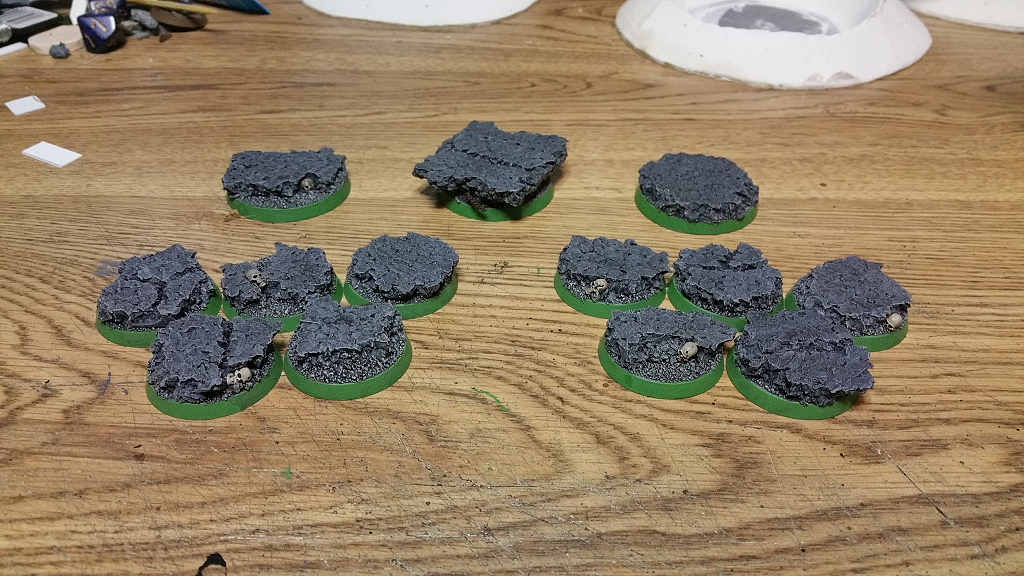 My #squaduary models are 90% finished then it's onto the bases. pic.twitter.com/WrqXz3em6v

So I thought I’d do something different for this #Squaduary thing and went for #AoS undead, but I have no idea how to paint bone. Could be a problem…here’s the test mini so far. Feedback welcome #warmongers #WIPWednesday pic.twitter.com/AqPmnGWafH

A very late entry for this year's #squaduary. Hlaine Larkin of the Tanith First and Only #warmongers #gauntsghosts pic.twitter.com/UEAn79snCF