The Forges of both the Warp and the Mechanicum continue to churn and produce Knights for the Long War. These come as both the slaved versions of their Imperial masters and the freed engines of Heresy. In my latest seclusion I have been working on just such a pair of glorious machines, which could be used for either side. They have been painting in my House Malinax colours but since I have a very limited amount of decals for that House I used regular Knight decals. The Malinax Forgeworld decal sheet was one of those limited release ideas.

This reminds me that I need to look over the Goonhammer guide for Chaos Knights. They are a good indication of what works and doesn’t in Warhammer 40K. I mean in the end I will take what looks cooler but it is nice to know.

A Knight in the hand is worth two in the bush 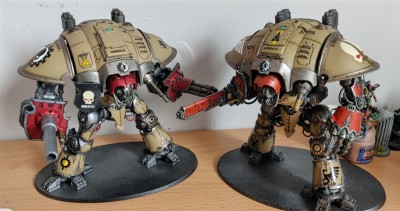 Here are the pair together, quite the imposing sight. I still remember seeing them first previewed and just being in love. Compared to the size of everything else in the game they were imposing and such a good look. Since then so much has been added to the kit and more versions through Forgeworld. 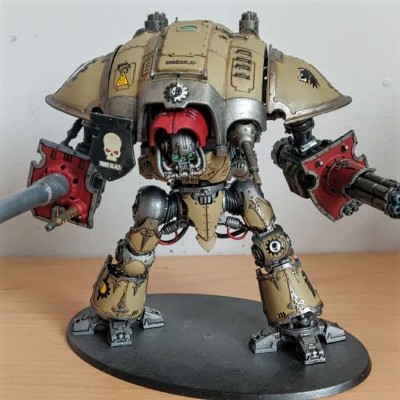 The Crusader (or Despoiler) Knight, this version packs a whole lot of firepower. I have been told a pair of thermal cannons is the way to go, but who doesn’t love the look of an Avenger Gatling Cannon. 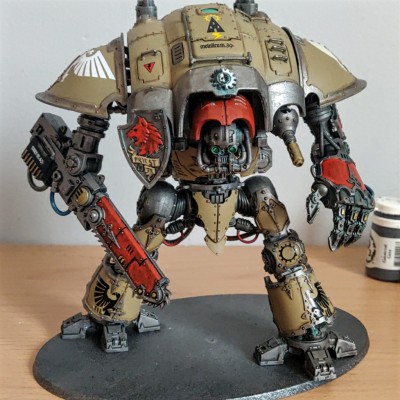 The Gallant (or Ravager) Knight is a very different beast, this thing is meant to charge across the battlefield. When it gets to the enemy it doesn’t stop, it just plows through them. 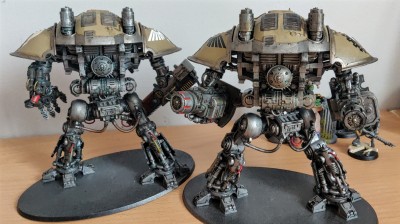 Finally some of the detail from the back. I always do my best to make it look like it is a working machine, with dirt and grime. The usual build ups.