Welcome back to Dreadtober part 2! As you will see there is a lot of progress being made with some of us keeping a nice steady pace and some of us shooting out of the starting blocks to nearly finished. We continue to have a nice array of models from across the Warhammer 40K universe. In particular I love how three people are using the Dark Vengeance Hellbrute and getting wildly different models out of it. 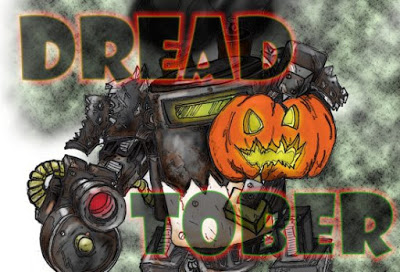 “Lots of green stuff applied this week, more so than I have put on one mini before. The problem I had was silly, as I was trying to work on one section I would end up placing my hands on a bit I had already done. Leaving another finger print to be smoothed out! Eventually I managed to start holding it by the base and the very top of the mini, keeping the tools wet and playing around with things a little. Hence my Reaper Auto-cannon has a happy little snake face.”

“Base build is nearly done…. there’s one major component to go on
before basecoating.
I confess though that as I’m going on I’m less sure about the use of the Imperial
Knight faceplate, still we’ll see.
In the meantime (and as much to try out silly camera and lighting tricks) I
present Dread-noir.”

“Dreadnoir (who I think will be properly named Mandrake) is part completed but not quite. Waiting for one piece still to arrive, and other bits which won’t be added on until I’ve done the painting of them, not done a lot of work on him this week as I’ve been Solodadding, but should get him undercoated properly this weekend.  Not sure what to put under his left foot, I could have him about to squash down on a nice hormagaunt… or even have it clinging to the underside of his boot… but not entirely sure yet. (suggestions welcome) I took the knight helm off the front as frankly it looked godawful… anyway, here he is in his brutal and unpolished form.” 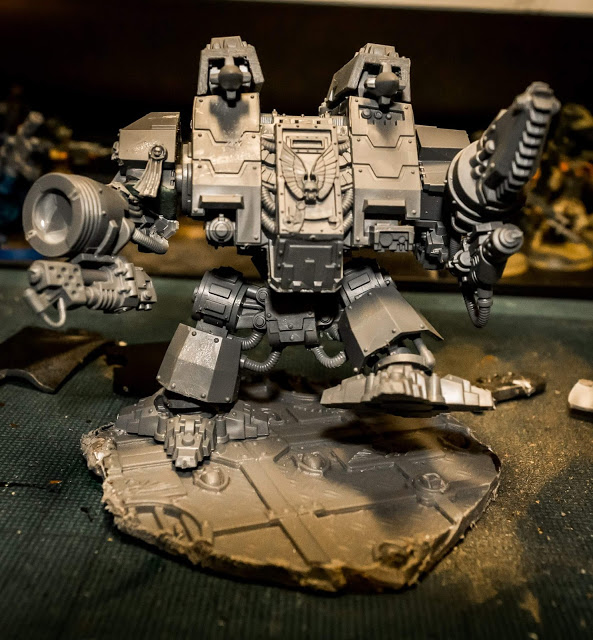 “So, with the cunning application of green stuff and some creative bending, my Ven’s power fist arm is now choking the life out of a poor Kabalite Warrior.”

“Hellbrute built – two powerfists each with built-in flamer. One as a third arm, one in the mouth. And a claw foot, because it turns out the one I bought off ebay forgot to include a foot and the back of the melta. He’s looking down a bit more than I’d planned but otherwise that’s my week 1 target achieved.”

“Unexpected side effects of hellbrute creation – half a kitbashed helldrake
that I will never get in a travel case”
“Work started on painting, going for a melding changing skin colour effect.”

(When Pluckylad got going he really got going!- Rory) 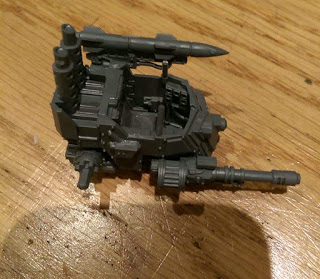 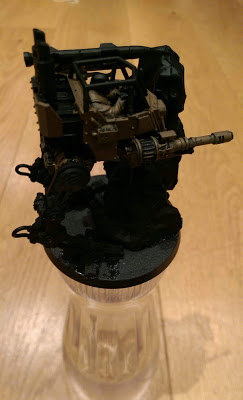 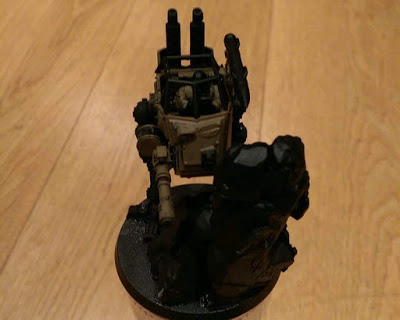 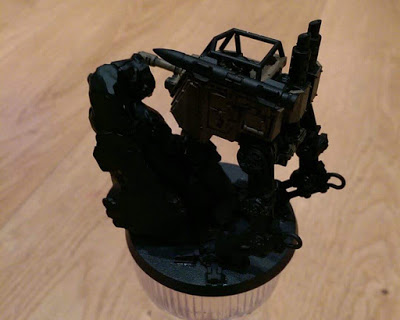 “Its a bit later than
planned, but here’s the first pic of my Hellbrute. Still some green stuff work
to be done, but this is the basically finished pose.”

“The Talos was a brand new kit for me, so I have put it together as a stock model to get a feel for it for now. I will be needing at least 5 of these bad boys, so now I know the kit better the others will be converted and modified. That is the plan anyway.
Colour wise, I considered going for the traditional blue/black and pale skin tones of the DE range, but then, whilst reading the homunculi cults book I was reminded of the Scarlet Epicureans. These are the immortal homunculi who seek out new ways of dying as a hobby. As their name suggests they use a lot of red in their colour palette. So the black/blue has become red and the flesh will be darker, more bronzed, to complement it.
My only worry was that it’d look almost Khornate in its colouring, so I’m going to try to avoid using gold/brass/bronze in the palette in order to look sufficiently different to the blood god’s chosen.
Anyways enough of my rambling; Update pictures. Not had a huge amount of time to work on it this week so its mainly block colours for base layers.”

“Serious arm kitbashing and scratch building going on. No idea why the flash just wouldn’t fire on the second shot,but here’s where I’m up to (way behind everyone else, it seems).” He really isn’t – Rory.

“Current state of play on the DP, finished left arm, improved guts and WIP face. Hacking away very carefully between the trim on a shoulderpad for that arm, so there’s like a ‘frame’ of just the trim in places with the flesh visible underneath.” “This was my first
ever attempt at any kind of vehicle model. I was never into painting models when
I was younger. Now it just seems wrong not painting them.”

“I decided to do Dreadtober as the last year and a half I haven’t touched any model in a build capacity as I’ve been planning a wedding and house move. I felt I needed the motivation and this was the perfect opportunity! The main thing i want out of Dreadtober is to gain new techniques as i very rarely go out of my comfort zone and only tend to paint tabletop standard at best.
I chose the battlesuit as I haven’t ever touched Tau before but brought a rather large second hand army at the beginning of the year that has just been gathering dust and i wanted to start with a bang and get my motivation back!“