Entitled “Boot to the Head”, or “Hammer of Wrath”  this is the 2012 GDUK Silver winner in the duel category. Further more this was done by my friend and frequent contributor this blog Kirsten. Currently she is working away with the 12 of us doing Dreadtober(part 1 on the blog here) through the blog. So below you can see the stunning work on the completed model. Kirsten allowed me to post her work here and I have split it into two sections, the construction and painting phase. Over this and the next post. So over to the lady herself. 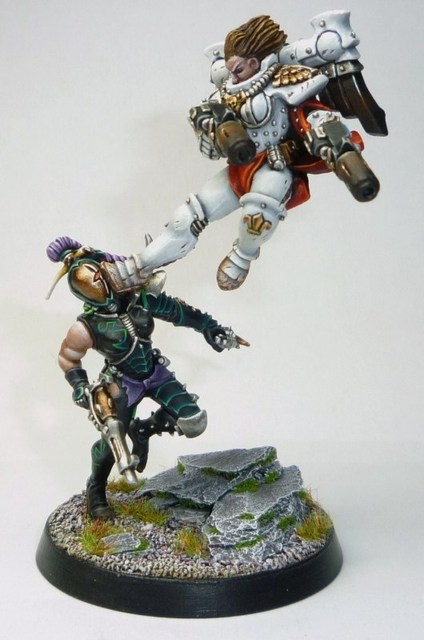 The initial idea firm in my head, I needed to have a solid base from which to work. The Dark Eldar Wych would form the part on which all the weight would rest, and which would need to be angled so it would counterbalance the Seraphim and her metal backpack (I really didn’t want to have to make a new backpack from scratch). 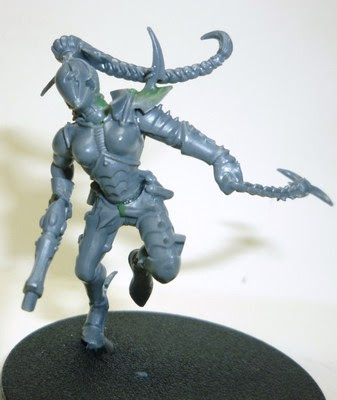 Luckily, she didn’t need much in the way of converting, just careful positioning and welding to the base with wire and superglue, and her major joints secured in the same way. 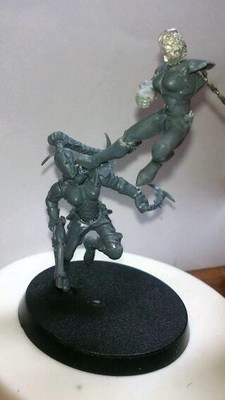 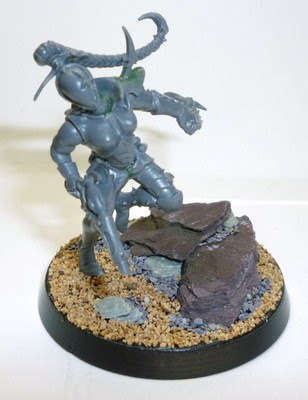 The Seraphim’s head was from an Escher ganger (the one with a boltpistol and grenade), and had her hair tied back (rather than in a giant mowhawk or plaits) so it wouldn’t get in the way of the stuff I was going to add. The gauntlet is a resin pre-production casting of the boltpistol hand from the Canoness that I still had from work: I needed as much as possible to be resin or plastic for the model to remain upright when assembled, and the other hand was going to have to be a metal Inferno pistol one. 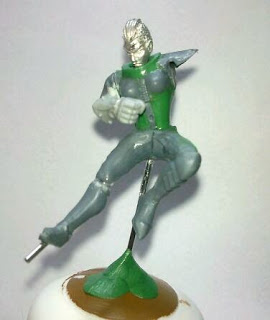 The Seraphim was going to have to be pretty much sculpted from scratch. It was a daunting task, until I realised that so long as I did it a tiny stage at a time, took my time over each step and removed it if it wasn’t right, then it should be fairly straightforward. And by a tiny step at a time, I really do mean some stages were “add the belt pouch flaps” or “add one edge of one greave”. It took almost 4 months to sculpt her, doing a couple of hours work, several nights a week. 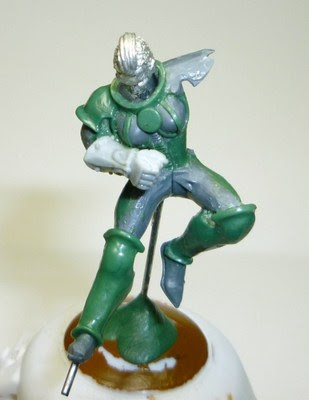 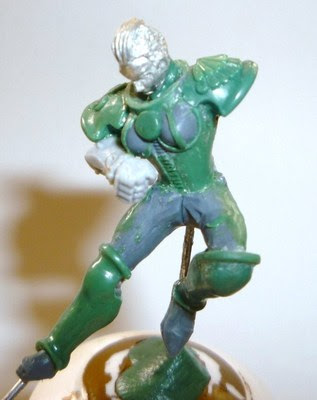 The knee-guard on this took three sittings to get correct. It simply wouldn’t stay upright and in the right place, so I had to build it up a fraction of an inch at a time, til it was about the right height then file and mould it round), and the lined armour on chest, and her right shoulder pad. I also finished the zip on her bodice.


The Fleur de Lys on her right shoulderpad took an age to get right. The bloody things are a nightmare to get equally balanced. The second layer of wing feathers was easy in comparison. 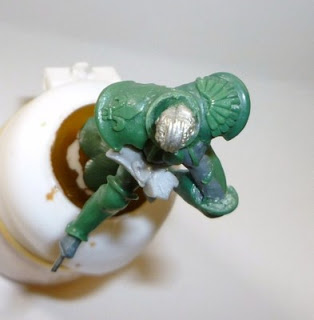 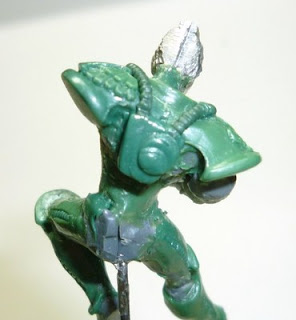 The foot was done in two stages: the first got the segmented shape in there, then the second filed it to sharp edges and added the sole, and starting to build up the gorget. Also, now the legs were appropriately thickened, filling in the hollows with tubing could happen. The backs of both knees were also filled in. 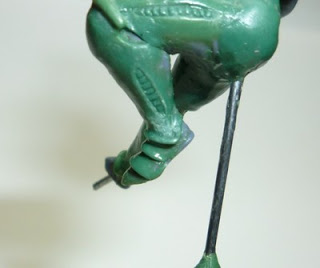 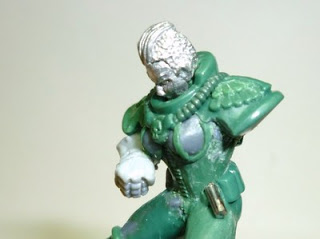 Most of the big things on the body now done, it was a load of small details getting added on each sitting. The gorget got more added each time, the shoulderpad details got finished off, and the belt pouches were added. They needed to come before the cloth went on, because whilst the cloth comes from underneath them, they also serve to hold the cloth down and so needed to be on first. 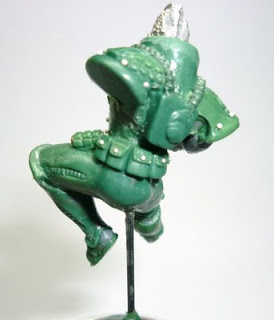 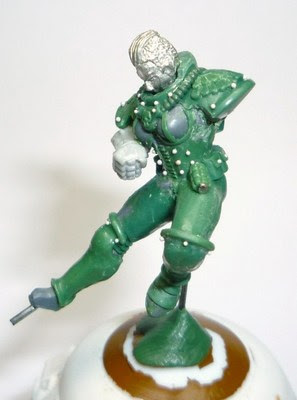 This lot were the final details before I started on the part I dreaded most – the cloth robes. All the rivets were added – some repeatedly because I kept rubbing them off, but a bit more copydex over them held them in place. They are bits from a Britax water filter refill. Crack one of the open and you have dots, rivets and pustules to last a lifetime.


Here we have the finished pouches, the finished gorget, the studs on the bodice, the finished frag grenade on her belt and the sole on her left foot. The right foot was being left until last so I could mould it to the Wych’s face. 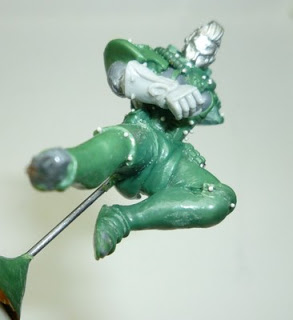 So, now I had no more excuses to put off doing the robes. Starting with the front loincloth, it was done in two steps. Step one – the parts that lay under any folds, then once that was dry the folded over part that lay on top of it. 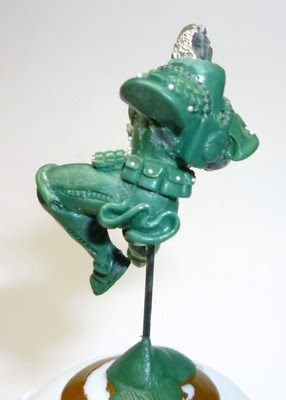 The rear loincloth was harder to pull off. It was meant to show movement and be flowing out behind her, yet green stuff refuses to do that by itself without drooping annoyingly. So out came the clippers and paperclips, and three pins were inserted into her posterior to support the green. 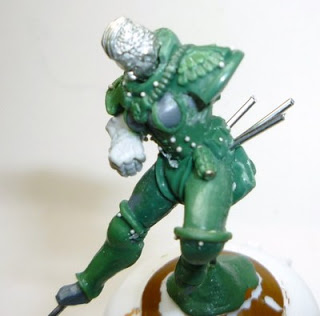 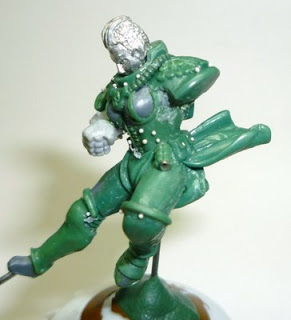 In between the last two stages of rear loincloth, the positioning of her left arm happened. Her right arm was also completed, by bulking out the elbow armour and putting tubing between the gauntlet and elbow, and her gun filed and smoothed so it would sit in her hand correctly. As the only Inferno pistol with a Fleur on it out there is left-handed, it was snipped off one of the pre-production resin ones I had and made to look serviceable with a little green. 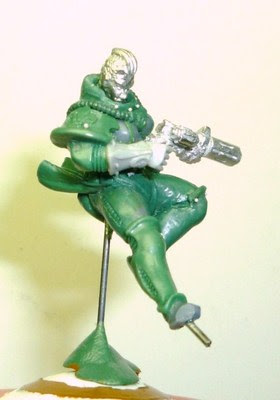 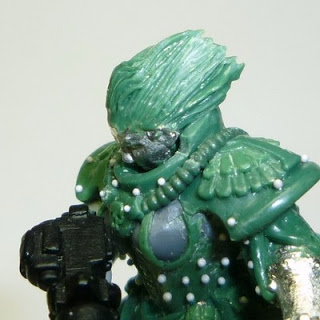 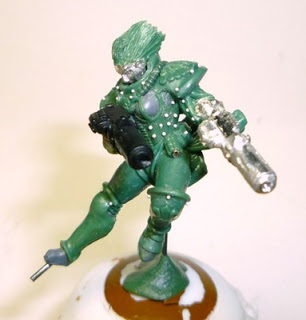 Then I added the foot. This was in two sittings again, to do the segmented top, then add the sole (which I pressed against the Wych’s face whilst wet so it moulded to the right shape): 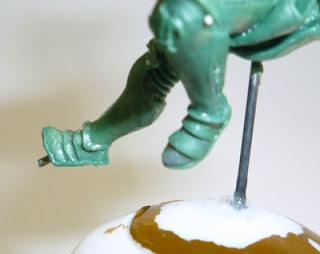 And a final check to see what it would look like once assembled: 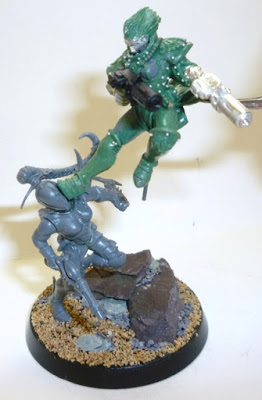 In the next post we will go over the steps of the paint job itself and a few more finished photos. Enjoy.