Here we are again with another Dreadtober, this is the second year it has run and I am going to jump in with two feet again. This time I am bringing along a few friends as well(see below for info)! After the rousing success of Dreadtober 2015 by Greggles the mantle has been passed to Joe over at Broken Paintbrush. I thought to get with something a little more shooty than my previous three Hellbrutes and so went with a Reaper Autocannon and a missile launcher.

The inspiration: “Everyone loves Dreadnoughts, right? That moment where the drop in behind your tanks and knock gently at the rear hatch? Sometimes they offer chocolate and flowers… other times the righteous fire of the Imperium..  really depends on whether or not you’re a filthy Xeno/Heretic (or if you’ve said you love The Emperor in the last half hour or so).

Anyway, I’ve gone for the Dreadnought as it’s got lots of large flat surfaces so I can try some painting experiments before I go on to get myself a new Imperial Knight… it might work, it might go horribly wrong… guess we’ll find out over the next month.” 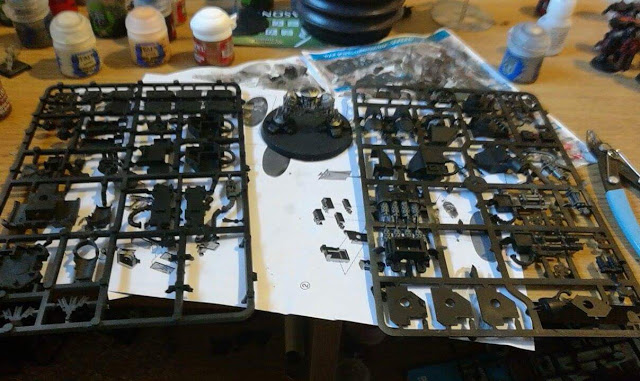 The inspiration: “I started a Tzeentch army to play with the psychic phase, and to push myself in terms of conversions and making things look interesting. I’m not sure where exactly I’m going with the hellbrute but my aim is to end up with a unique looking model which is still clearly WYSIWYG. And hopefully decently painted, but I won’t hold my breath.” 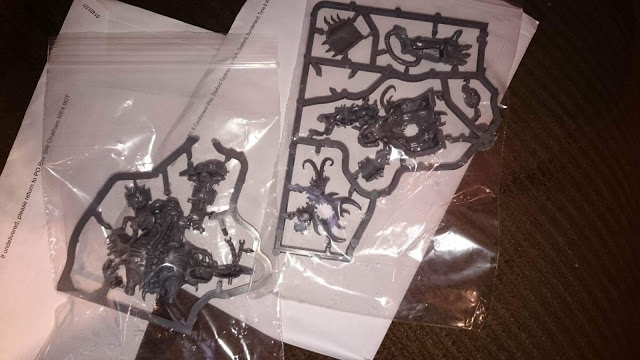 The inspiration: “After playing with a true swarm for a while, I decided something larger was required as a distraction whilst my gaunts ran across the table…”

The inspiration(tOther went one step further it seemed and wrote some fiction):
“The memories flooded back into him. The soul echoes screaming across the battle field. The weak Monkeigh being harvested by his creations. The falling stars, and the Enhanced that the foolish Imperium of man thought to create, stepping from them.
He awoke, as he always did, within his Crucible, deep beneath Commorragh. Whole again.

His mind dwelled upon those creations. They were nothing as exquisite as his own delightful servants, they were too crude and without elegance. The deaths they gave him though. In that they were wonderful.
This time had been sublime. His chosen guardians had engaged the bulk of the armoured foes, all alike within their ceremite shells. One had stood out though. A warrior who stood head and shoulders above his brethren. His shield turning aside blows which would have slain lesser mortals, his hammer, crackling with caged energy, only released when it struck down upon his loyal slaves. He had signalled his chosen to allow this one through.
The behemoth immediately took the opening, as Ezarad had known he would. These Astartes were almost robot like in their mind-set, rigid and predictable. He closed on Ezarad and swung a great blow, seeking to to end this quickly. But his armoured form was much too slow to catch Ezarad. With a side step he dodged the blow, activating his clone field as he did. Now where this Astartes had faced 1 of the thrice blessed court he now appeared to face 4, all identical. The beast threw himself into a frenzy, seeking the real amongst the fake.
With a flick of his wrist Ezarad had scratched the unarmed face of the giant, his gauntlet injecting the toxins into the flesh of his foe. This battle was done. The Astartes had staggered and fallen to his knees as Ezarad turned away. It was such a disappointment when a foe fell too soon, but alas that was sometimes the way of even the mightiest of foes against certain concoctions.
It was with great surprise that the great shield of the giant smashed into his body, flinging him to the ground. Gazing up he stared into his enemies eyes, noticing the hatred, even as he noticed the black liquid flowing form its face. Somehow it had overcome the chemicals. As great hammer swung towards Ezarad’s head, his last thought was of curiosity. This Behemoth’s genetic secrets would be his.

The inspiration: “When I first put together one of the metal Penitent Engines for work and it fell on its face, I decided “Nope, gonna have something better for my army”. I think I am physically incapable of using a kit without doing*something* insane to it…”

The inspiration: “Been wanting to get this guy done for a while, he’s been sitting next to my modelling table gurgling impatiently at me. You know how Nurgle Daemon Princes are.”

The inspiration: “Most of the games I have played so far. I have found that once they get a flyer in. My army is screwed. Unless you have a flyer, it’s all down to hoping to roll a lot of sixes. And that never happens as much as I would like. So that’s why I’m building this Doom scythe. Finally going to get some pay back.”