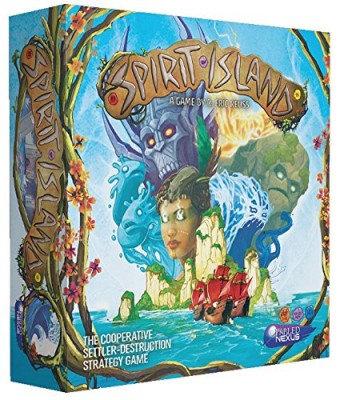 is a fully cooperative board game where the players take the roles of spirits defending their island against invaders. The invaders expand and pillage relentlessly and the spirits must use their primordial and elemental powers to destroy the invader’s settlements, cause enough fear to drive them away or use beasts and fauna to curtail the inward exploration of the island. The spirits powers are divided into fast and slow, with several options of gaining powers and energy to use powers and many of the spirits complement each other’s abilities. The game also has spirits ranging from the simple to the complex allowing new players to integrate with more experiences ones seamlessly.

The core set plays 1-4 players and takes about 1-2 hrs to play. It is recommended at 13+, probable due to its relative complexity. There is also an expansion called Branch and Claw

which adds new spirits, new powers, new tokens and (significantly in terms of play impact) an Events deck with the knock on effect of a new sequence of play. There are also 5th and 6th player components available from Greater Than Games and the game does seem to stack well to 5 players at least, though it does, of course, increase playing time. 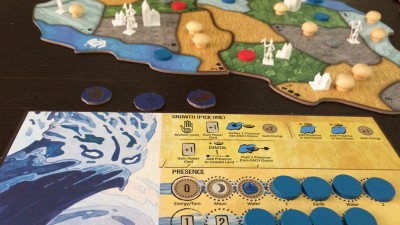 Rather than go through a rules play, I will present some thoughts on my play experience with the game.

The first thing I noticed about Spirit Island is that it is complex. You can dive straight in and play, but very quickly it becomes apparent that if you don’t think about your move and consult with other players it impacts on your collective effort to save the island. Perhaps it is more correct to say that the more you play, the more you become aware of the manifold synergies between players and multiple nuances that can lead to more effectively outcomes a turn later.

The key seems to be to prevent the island from blighting out (invaders will hack and slash the fauna and wildlife and render an area barren) while limiting the spread of invaders through use of powers and positioning of preventative counters. The game comes with minis – cities, towns and invaders – which are more functional that pretty, but add a tactile dimension and a good visual indications of how (increasingly) doomed the island is.

In your early games, the focus tends to be on your own play, innate powers and building your energy levels and amount of cards you can play per turn. As you use your once per turn action to acquire other powers, the potential of how you can influence and improve other spirits becomes evident. You can achieve this influence through our own innate powers and initial power cards, but for me, this did not become evident until I acquired more general play cards.

There is a lot going on in this game, but once you get into the flow of things, the stages of play knit well together and the sequence of play becomes organic. It’s probably best to play with more experienced players as I can imagine a group of new players trying to figure this out form the start might be a challenge. Having said that, it would be a challenge worth completing. 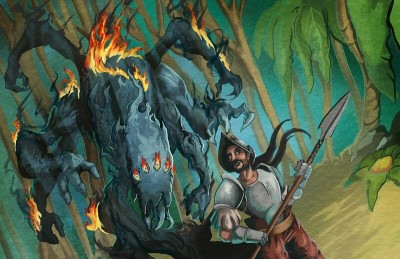 I really like this game. It has immense replayability as not only can you choose new spirits, but the interaction between other player’s spirits ensures that the same game rarely happens twice. Even if you get to that stage, there are scenarios to play and the events deck from the expansion does add a new layer. Once you get your head around the rules, the play does flow well and it’s fun recognising and learning to make full advantage of the synergies and nuances in play.

This is a challenge game and a fun one. As a fan of cooperative games, I always enjoy playing against the game. The feel and atmosphere of this game is unique in my experience and the aesthetic is pleasing and different, as befits the spirit world. In all, I’d rate this highly for both play experience and replayability. I would recommend that you have your initial game with experienced players, as it will make the introduction to the game far easier.