Once again thanks to Alchemists Workshops who supplied the Start Collecting box sets for this Tale of Two Warlords. So, here’s the finished patrol detachment:

It’s taken me longer than I wanted to paint this squad – sadly real life (mostly in the shape of my day job) exploded everywhere and all my painting time was sucked away in a flurry of ‘reality’ Ugh.

Anyway I’m reasonably pleased with how they turned out. I’m never going to win any prizes for my painting – but they’re ok. 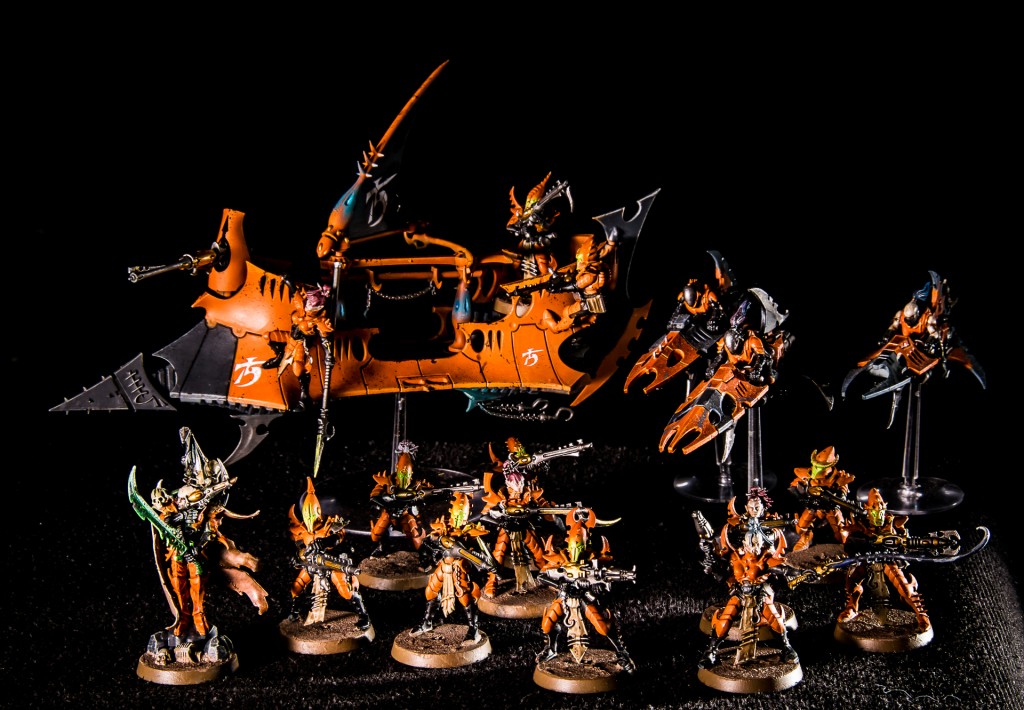 Well he went very very wrong. I was trying to do some OSL from his sword (and this army is the first time I’ve done any OSL) and I messed it up royally such that it looked like I’d just emptied a can of green spray over him from close range -it was awful.
Having done that I needed to repaint the Archon and fix what I’d messed up. He’s worked out OK. I like his sword and the rest of him is passable, perhaps. I absolutely loathe the model though – it’s a horrible fiddly model in the first instance but it’s also completely monopose. Still, he’ll do until I get a different Warlord for my Army. 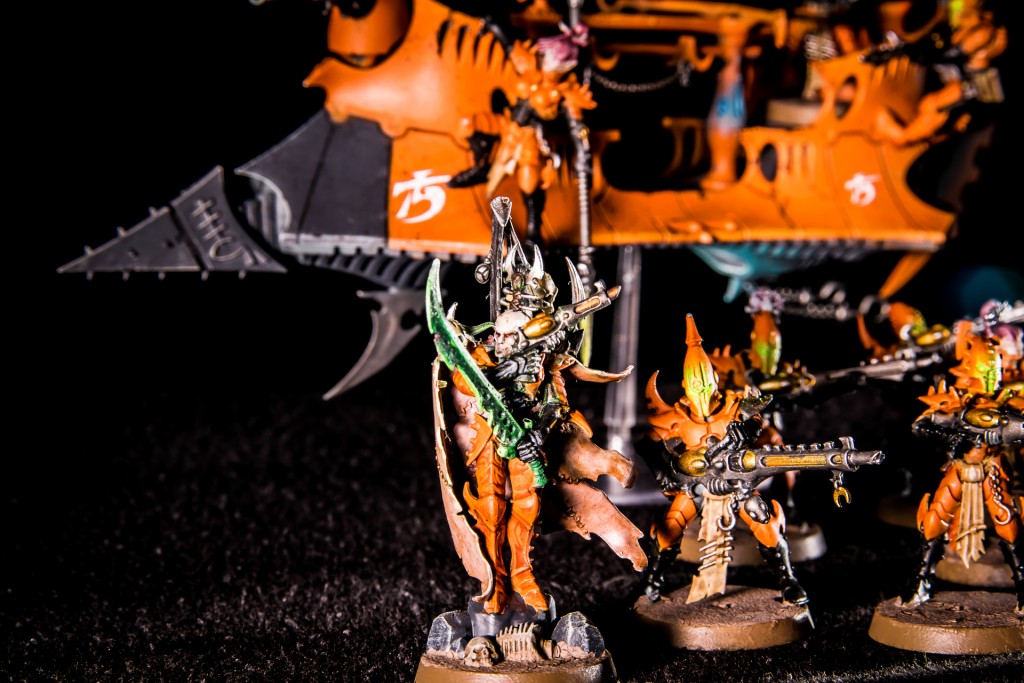 Objectively I think the Raider is the best piece, I enjoyed doing that one. I did try to do some freehand work on it but sadly my skill levels aren’t up for it so I had to resort to transfers. Still seems to work out OK though. There were lots of extra spikes, and chains, and paraphernalia that I could have put on but I decided for my first Non-Imperial vehicle that I would start by keeping it simple. Consequently it’s got some nice clean lines on it, and I think the relatively subtle battle damage on it really works.
I love the dynamism of the warriors on the hull – hanging off the edge waiting to lay alongside the enemy to “sink, burn or take her a-prize“. It’s a really nice model. 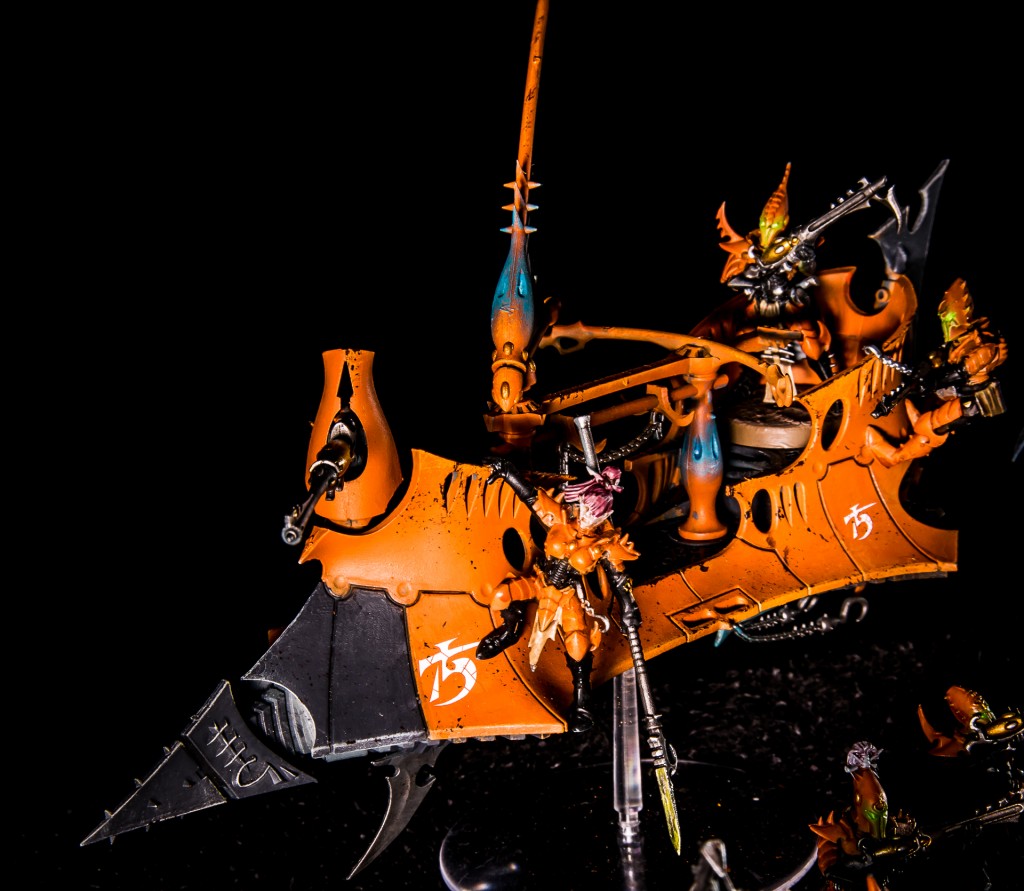 I ended up doing 11 (having borrowed one of the crew of the Raider). This allows me to field a 10 person squad (and get access to the Heavy weapon – a Splinter Cannon in this instance) or two 5 person squads each with a Special Weapon (either a Blaster or a Shredder). As mentioned above this patrol is my first foray into doing OSL and I wanted to have the eye slits in their helmets glow. Rory helped me along with some tips on how to try it and I think they worked out tolerably well. 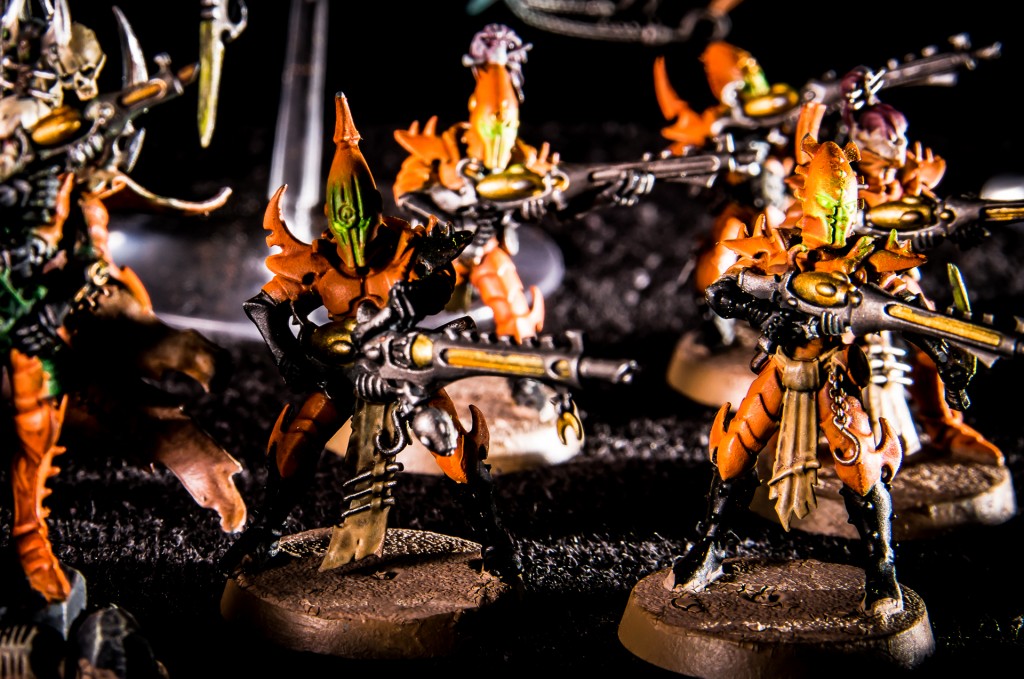 The jetbikes I did some months back, February I think (back in #Squaduary I think you will find). I’m still happy with them but I really should have dusted them before I took photos (my camera is sensitive enough that it shows up ALL THE DUST) still and all. 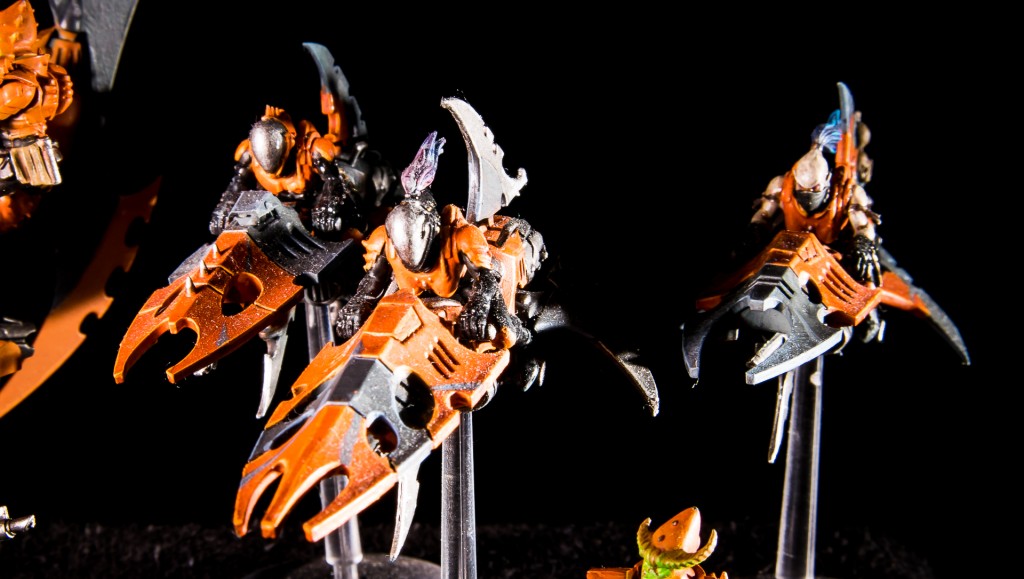 So, that’s them. I’m pleased with the paint scheme, it worked out better than I thought. I appreciate doing the Drukhari in warm colours seems to fly somewhat in the face of tradition – but I like how they’ve shaped out. It’s a small force so far, fully kitted out it works out at just over 400 points. So whilst enough for a very small game it wouldn’t be a very satisfying one.
Thankfully GW have updated the Start Collecting Drukhari boxed set, and the new one is a Succubus (much better HQ choice for me I think). 10 Wyches, 3 Reavers and a Venom. I suspect I may purchase this boxed set sometime in the very near future.
With that I’ll hand over to Rory to talk about his Dark Mechanicus in the next post.