We are well into the new edition now, but play time has been cut short but Papa Nurgle and the devastation unleashed by that. So with all that going on I fell back on playing with list ideas and seeing how much fun I could get out of 9th Edition Chaos Knights. Of course I will be going with my beloved House Malinax (using House Vextrix for rules). 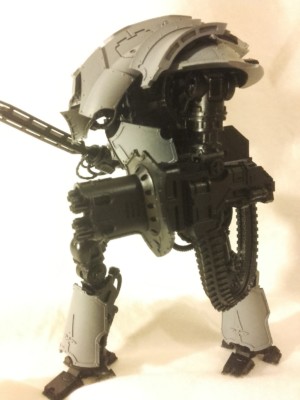 The Magaera isn’t ready yet so have an old photo of the Castigator.

My Warlord will by my as of yet unnamed Knight Magarea, mainly as I have always loved the look of them. Plus a giant lighting cannon! Favour of the Dark Mechanicum means it gains a wound back a turn, plus the Blasphemous Engine allows it to count its wounds as double for brackets.

Although pretty much all the other models in the army are all because of the looks. Rule of cool is not a great way to win battles but it is a personal favorite way to play.

Work in progress shots of my Magaera are going up on Instagram and Twitter as I complete bits. I have used the Chaos Knight kit as my base and I will doing my best to integrate the Forgeworld pieces.