Bolter fodder, renegades and heretics, distractions, reserve troops, rogue PDFs or plain old Chaos cultists. Whatever you call them they are a staple of of the armies of Chaos. They are useful in both the background of the factions and on the tabletops. In Warhammer 40k 9th edition it is no different.

Chaos cultists are not something I have ever used but it was about time I got some to add to my Iron Warrior’s. I started off with the usual set from Dark Vengeance, a solid set of 20. That didn’t seem like a Tide of Traitors to me. So I got myself a set of the cultists from Blackstone Fortress, the Cultists of the Abyss, and added the generic set of five. This brought me up to 30.

The bonus was I could use the commander of the Cultists of the Abyss as a leader for them all. Mainly for thematic reasons as they don’t get leaders in a Chaos Space Marine army. 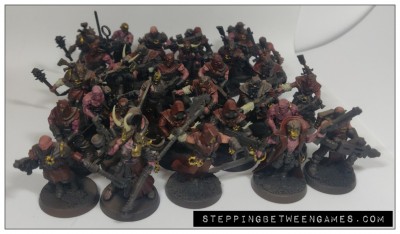 I wanted to have a more Grim Dark style to these models, while utilising my airbrush to do some of the heavy lifting. So after a basic rattle can of black primer I hit them at a 45° with a dark brown. Then a zenithal of a lighter brown. This gave me the basic colours to work up from.

Various selections of cloth where picked out with Blood Angels Red, the contrast paint. This allowed the gradients underneath to still be used. 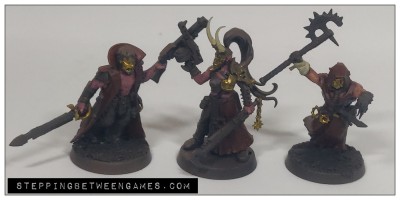 Everything needs to go through various washes at this stage, but progress is being made.

One thought on “Tide of Traitors – Chaos Cultists”