So with the Wrath of Magnus dropping and rampant list building occurring as I drool over the models I finally hammered out a list at 2000 points I like the look of and would fancy playing. Ok this list doesn’t involve Magnus himself, this list is aimed at a more general play as I don’t think I’d want to drop Magnus into every battle I do. Even if he does look this awesome:

I am not quite sure how my own version will turn out but we will find that out after Christmas went Santa drops it off under threat of being turned into a Chaos Spawn.

For this list I did my best to steer away from my usual favourites of Hellbrutes and things with armour values and went for a lot more feet on the group. Like a lot more. 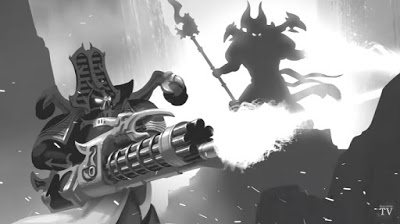 The plan is to use the DP to threaten anything with terminator or above armour, he can zoom around the battlefield and reduce things to mush with the Black Mace and still keep casting. With the sheer volume of mastery levels in this army there will be a lot of dice to go around. Adding in the ability to cast extra times due to Masters of Arcane Knowledge and re-rolling perils I should get a lot out of the psychic phase.

The Thousand Sons themselves would form up to either side of the Scarab Occult, who would have the exalted sorcerer join them. The Exalted could then use the Astral Grimoire to help troops move quickly where they need to be and hopefully get some surprise rapid fire into folks who drift too close.

The Pink Horrors I would use to either screen the Rubrics or hold back field objectives and otherwise generate power dice. Even if they get shot up they can generate new Blue Horrors to screen the remainder. Of course the Blue Horrors would be psykers as well and generate more dice.

The Screamers could easily nip around the battlefield to grab objectives or take out vulnerable vehicles with there armour bane bite.

What do people think of this list? Possibly viable? It does have 10 points to spare that I just cannot seem to make work anywhere.