For this post we have Tom_PaintsStuff and his ideas of how good Lictors are and how to use them.  Tom: “I’ve been playing Warhammer since the first 2nd ed set came out. Man I’m old. In between ranting about army lists I’ve designed, I then impulsively build those armies, play them, and find out my dreams don’t match reality. Competitive player, who is nonetheless terrible at the game. Catch me on the mid to low tables. In between obsessively painting, and losing at 40k, you’ll find me running events. I started the national tournament scene in China, and now act as a TO for hire in the London area. 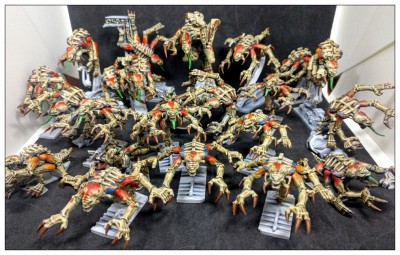 If you’re tuned into the 40k competitive scene, you’ve no doubt heard the unsettling chitter that is the rise of the Tyranid hotness. With the release of War Zone Octarius – Book 1: Rising Tide the venerable 8th edition Tyranid codex has a new lease of life. In the wake of the balance update, big name players are ditching Orks, Ad mech, and Drukhari, and embracing a very specific form of the hive mind’s minions.

What does that form look like? Well here’s some things we know it contains for sure:

Hive Guard
Lots, and lots, of hive guard. These are going to be 3*6 hive guard, probably in a Kronos battalion for the re-roll 1’s to hit. I mean, you’re not going to move them. They have Impalar Cannons!

Blobs of Termagants with devourers
They throw out a lot of shots for their points. A LOT of them. Rerolling 1s to wound and moving fast.

Swarmlord
Obviously. It wouldn’t be a Tyranid list without him.

Maleceptor
Yup, a Maleceptor. Who knew. Why did this big beast make it into the list? It’s because of the new synaptic link powers in Octarius. Maleceptors get access to this bad boy for just 15pts. They can stick that ability on any of the Hive Guard units. 1d3 damage is a world of sadface, but RE-ROLLING that 1d3 and your Hive Guard becomes brutal.

This is a 0 fun list for all opponents, throwing Gaunts and Genestealers across the board very rapidly, while deleting units from out of line of sight with the Hive Guard. As the levels of terrain at events continues to rise, and the new 9th edition terrain rules really start to show their value, you’re going to find quite a few list really struggle against that much hidden firepower.

So, where does my own ‘Nid list sit? Well, I love to try out some jank, and in the case of my Tyranids the special sauce is spores. 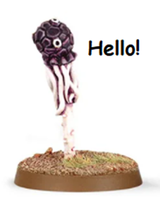 Let me break it down

18 Hive Guard, because I am a terrible human being. These should be able to shoot most things off the board pretty effectively. But this time, instead of a Maleceptor, I’ve got a special Tervigon spice.

Admit it, you had to look up what a Tervigon was. This big ugly brute is easier to hide than expected, as it’s quite low to the ground. Even if it is visible you can hope that toughness 8, 3+, 5++ keeps it around for a while. Anyone who did go and look up the Tervigon will notice that it has the ability to put Termagant’s back into units. But only the basic Fleshborer version. Hence the inclusion of these under-armed troops. In fact, the Tervigon can return 10 termagants to a unit for free within 6”.

I even saved 50pts because it can also summon a unit of them, and I think that might be a nice situational surprise. They can be spawned within 6” and 1” away from enemy models. So abracadabra – move blocking hilarity.

But the real reason for the Tervigon is their Hive Guard buffing options. Those S8 shots are re-rolling 1-2 on the wound rolls.

Biovores. Here’s another unit you had to go look up. The Biovore is a heavy support unit that chucks a spore mine at a unit each turn. In this list I’m running 9 of them.

A mortal wound isn’t very powerful, but that doesn’t matter. Because, these Biovores will be firing on the move. Where will they be going? About 1” from where they started. The point is, that means they’re -1 to hit. Because we WANT them to miss:

The key for this list is the Floating Death rule. At the end of the charge phase, if you are within 3” of a spore mine it blows up. That timing is important, because it means they can’t be removed in the enemy movement phase.

If I score the statistical average I’ll have 6 mines. I want to drop these as a screen to move block my enemy’s non-flying units. With 6 mines on 25mm bases, each with a 1” (let’s call it 25mm) engagement range, that gives each mine a roughly 75mm diameter bubble. If I am facing an enemy on 32mm bases I can strong those 6 spores with a 30mm gap between their engagement ranges and stop an enemy model moving between them. That gives me a total of 570mm. That’s a 22” wall I can drop across the board.
You can’t move through them. You can shoot them in the shooting phase, psychic them, heck, even charge them. But you can’t move through them.

Oh, and killing them scores no victory points in any way, so have fun.

Ok, we finally get to the title of the post. Lictors got a bad rap in prior editions. They are single models, so they take up an elite slot on their own. Their damage output is pretty terrible. But here’s what I think makes Lictors amazing.

That humble Lictor is a non-character, single model, infantry, unit. Oh, and it deep strikes.

That humble Lictor is a 37pt action monkey of my dreams!

You can sneak a 40mm base into lots of little corners. Show up from DS, complete your ROD action, then worst thing that happens is your enemy sends something to kill it. Best case scenario you use it to score Engage on All Fronts for a bit before your opponent finally gets sick of it.

Yes, I can truly say, that of all the jank in this army: The Disgusting Hive Guard. The wall of spores from my inaccurate biovores. The Tervigon farting Gaunts out and buffing the Hive Guard… these Lictors are my favourite. This list is a work in progress as I paint my way through it. Watch this space for a report on how it actually does. My prediction is: not as well I in my dreams, but isn’t that always the way.”

2 thoughts on “Tyranids – In defence of the humble Lictor”