While I have been absent on the site my own personal Necron Tomb World has not been. If you follow us on Instagram or Facebook you will see I have been working away on this force. I now have enough of it done to field a decent force, as such it needs to be shown off.

The one* thing missing from the group picture is the Shard of the Void Dragon I have been painting. That is because it is currently being shown to my followers on Patreon. I will present it over here as well, when I finish it. 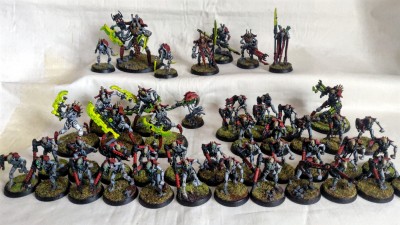 The full army, so far. That is a lot of Necrons, with more on the way. 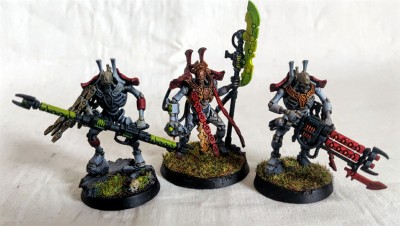 The standard Lord who comes with the Indomitus set is fine, but I never found it as interesting as the Royal Warden. I ended up with two Wardens, so one needed to be converted. Not quite sure what I came up with here, but it could stand in for a few different Necron HQs. A simple conversion removing the relic blaster (which got used on the Hexmark instead) and combining some Gauss Flayers.

My favourite piece is the Hexmark Destroyer, who I converted from a Skorpekh Destroyer. Essentially a unit of six Skorpekh isn’t that useful compared to five and I love the idea of the Hexmark. Since I was then left with a spare Skorpekh I figured it was time to create a gun-slinging head hunter for my Necron Lord. I have added some Necron skull plates around the Hexmark’s waist to show the recent victims. If a thralls programming goes astray, this is how they are dealt with. 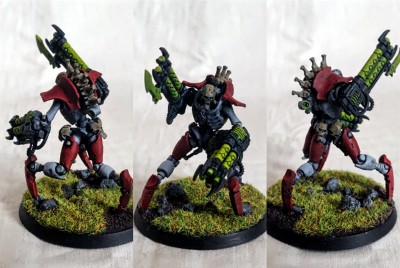 I really like how my troops turned out. The basic warrior, to me, is nothing more than a zombie with a gun. As far as I know in the lore they were the common people, before everyone got turned into robot killing machines. To buy into this theme I removed the right arm and placed the gun onto a cut off piece from a sprue. This both formed a handy mount for the weapon but also gave an almost lob sided look to the models, metal zombies. The true backbone of the Necrons! 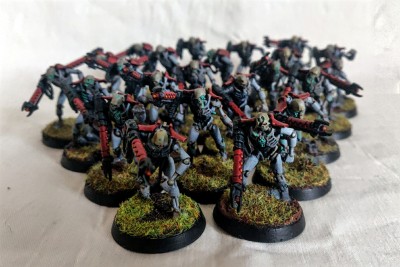 *Oops I also missed the 6 bases of Scarabs.

2 thoughts on “Rise of the Necrons – Army Showcase”