We are at week 3 of #Squaduary 2019 with only a week to go! As ever I am delighted with everyone’s progress. Great to see so much bare plastic getting painted.

Productive week this week. Almost all base colours done before washes and final highlights on my pledge (and the other 24 models I’m painting as part of this batch…). I need to have them all finished before Tuesday night for the next stage of the campaign kicks off, and that’s looking well within my means. I am quietly confident that I’ll actually complete squaduary this year.

Darren
[No update this week]

My Sons of AnOrky are coming along, not as far as I would like but that is always the way of it. Bases need finishing off and the riders painted and stuck on. I am grateful to past me for not glueing them in already.

Fingers crossed I will get them base coated tomorrow and the painting can begin! 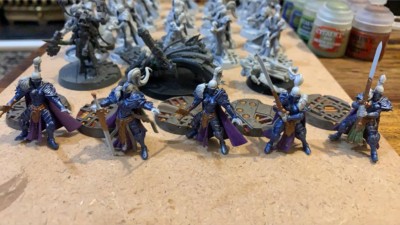 Managed a couple of nights painting this week and made some noticeable progress. Also tried a new paint for the armour, as it needed a bit more time to cure I got the bases sorted. Faces and metal to finish off before picking out the fine detail.

FunSproggy
[No update this week] 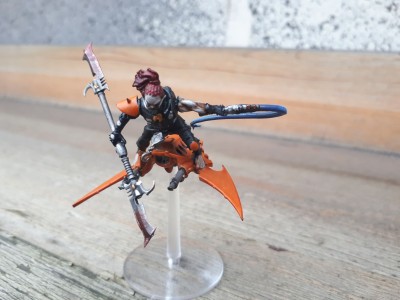 Update for this week: I’m off to Kent with Funsproggy, so no pictures from us I’m afraid. Work continues apace however, the Hellions are all but completed now. 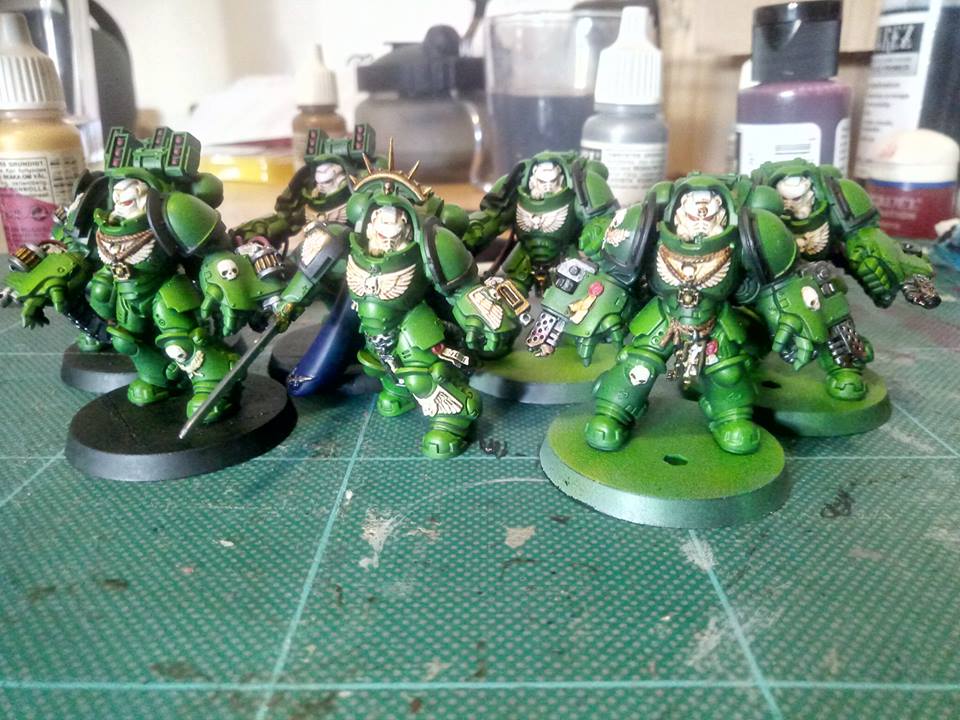 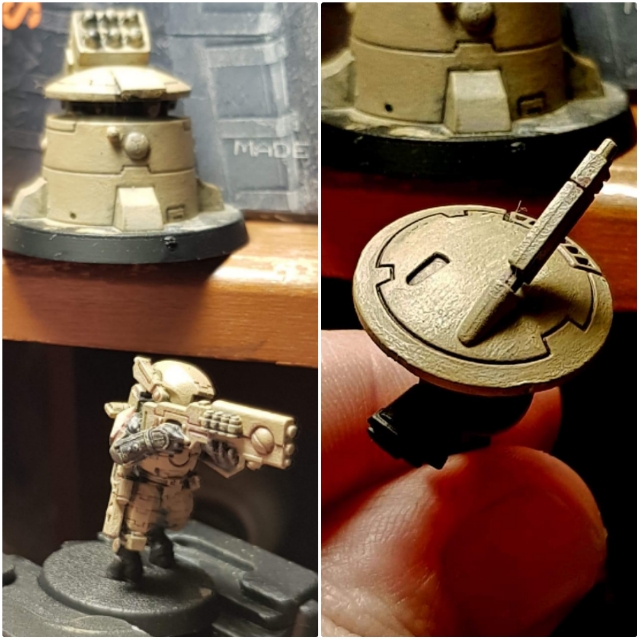 Tune in next time for the continuing adventures of…

Seriously though, really pleased with the gundam ink pens, need to work on layering and highlights.

Painting well underway with a little face and hair detailing to go. These are delightful to paint – such nice clean lines and lovely textures.

So at the moment, the panels look like this. At least the yellow has the vibrancy I was after now.

I got the first bit of painting done on my next batch of warriors, still two wraiths to finish making.
I’m off work for half term but that means more time stripping wallpaper and less time painting models this week. 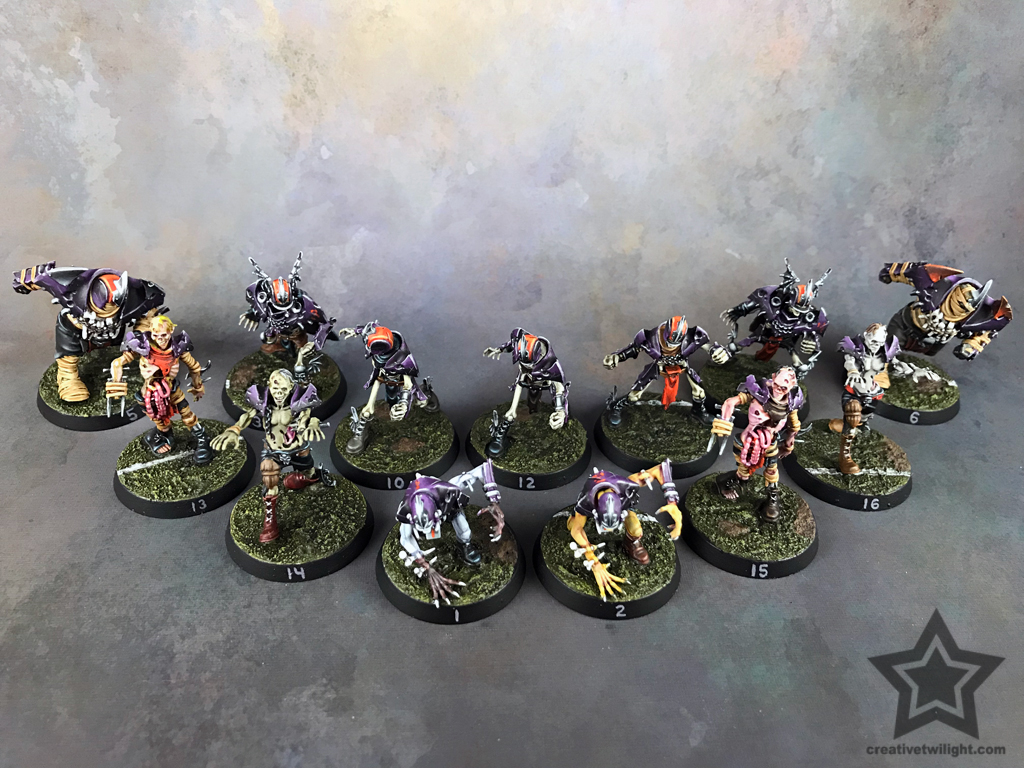 I managed to find an unusual amount of free time over the last week and was able to completely my Undead team and my pledge. I had a blast working on them and I can’t wait to throw them into the new season at my FLGS.

(Thor has a complete post on this team on his site Creative Twilight, with a comprehensive breakdown of how he painted them.) 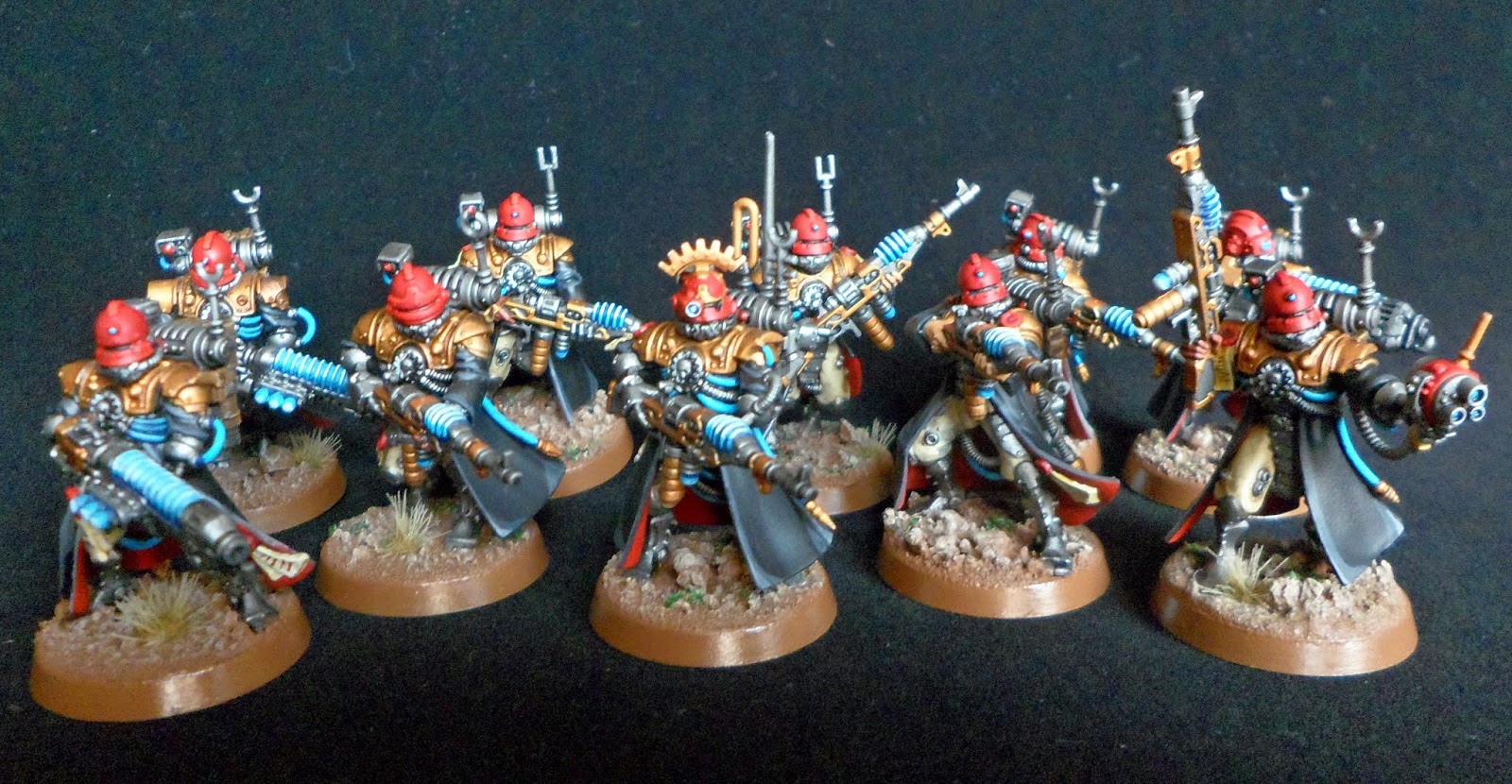 I pushed on and did great guns and completed the squad ahead of time. I’m rather pleased with my efforts and think they will make a fine addition to my growing AdMech force. 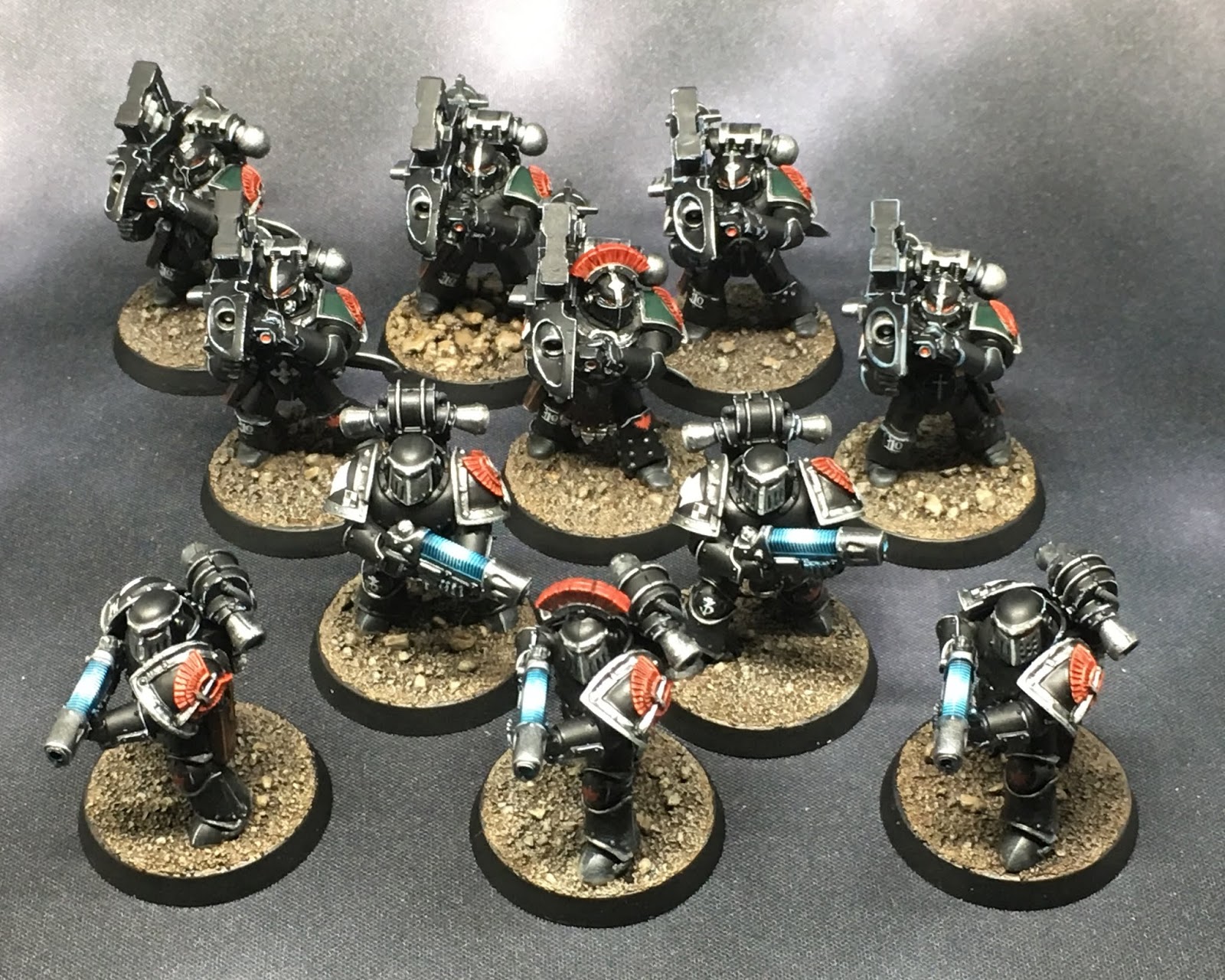 This week I tidies up highlights, did a lot of work on transfers for squad markings and legion symbols, then brought both squads to DONE! 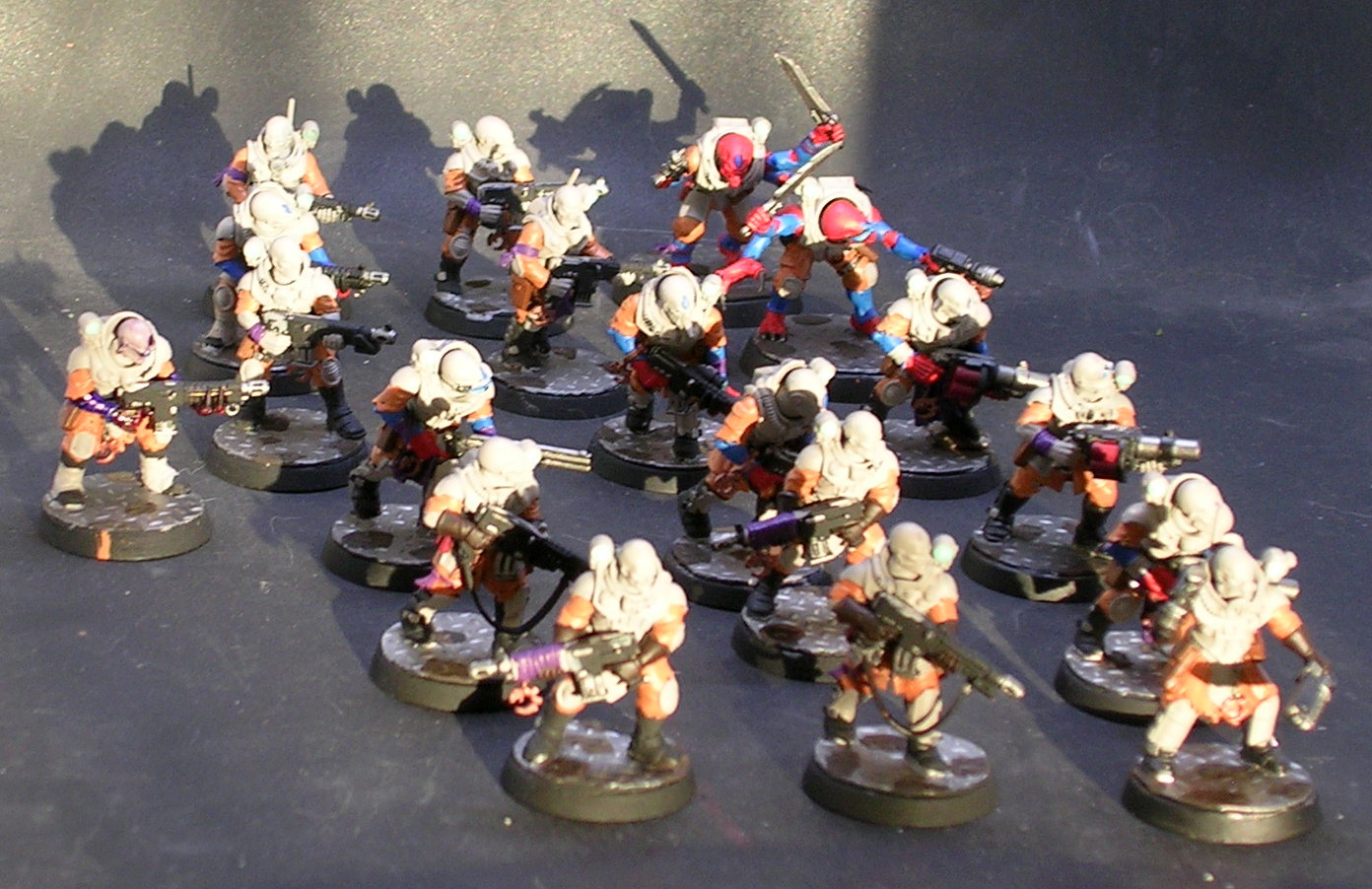 All that really needs to be done still is touching up all the black (which is, admittedly, the most fiddly and obnoxious part of the whole process), doing the washes and glazes, and a bit more on the bases with some Skrag Brown and then going back over them with some metal drybrushing. 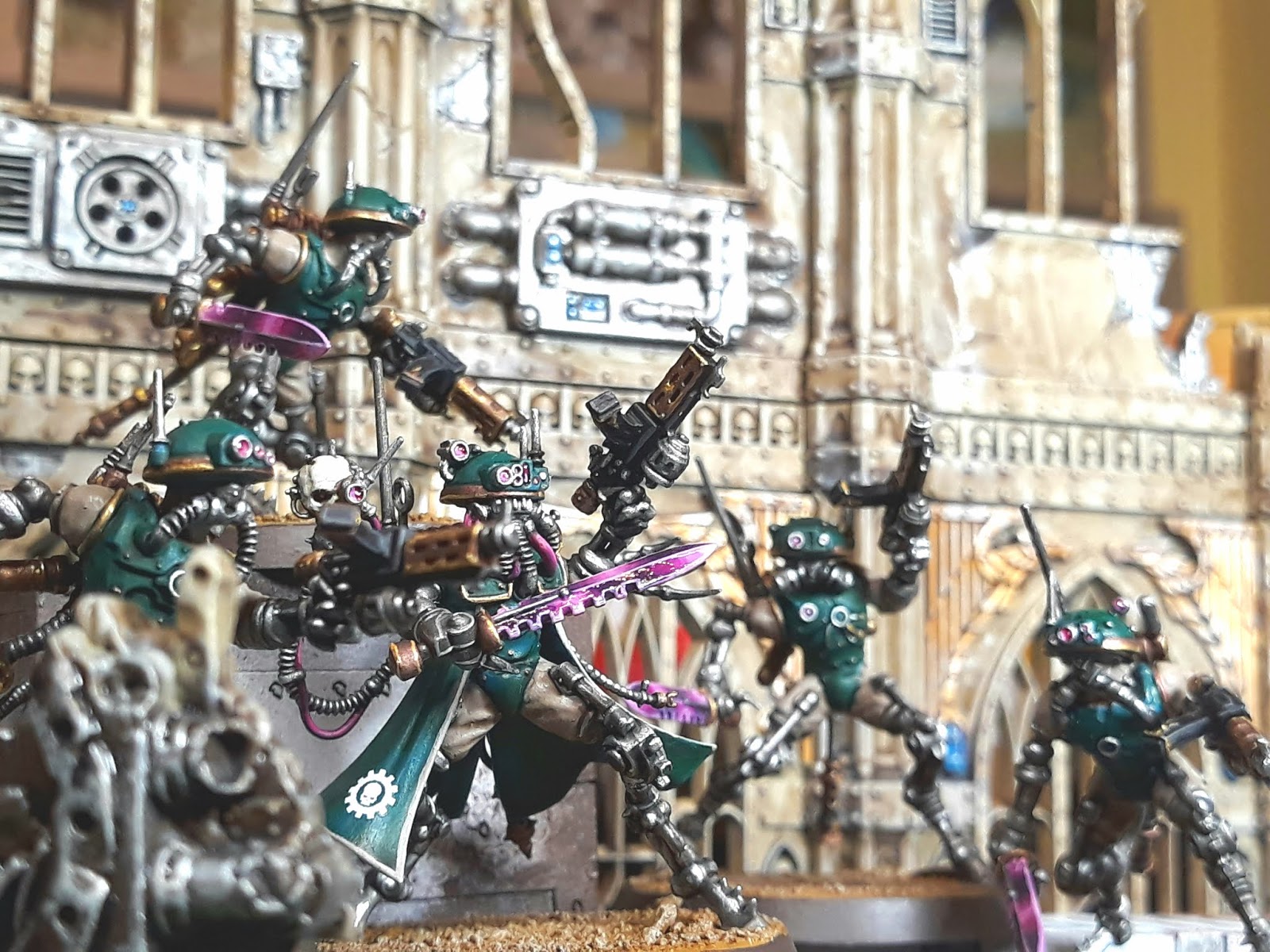 What a week it’s been! Excellent progress has been made, but not necessarily in the direction I expected. First up, I finished painting my squad of five Sicarian Infiltrators from the kill team box set. 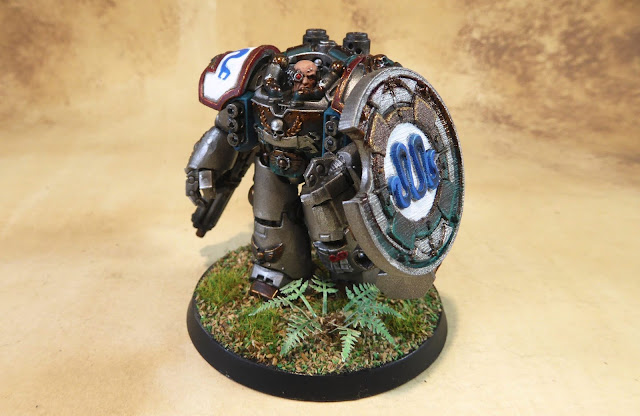 I have been tinkering with the test model for a while and finally settled on the scheme and shoulder symbol size. Now I am just transferring what I have learned into the other five. I am finding that as I go I keep developing faster ways to do things, so hopefully I can get them all done. 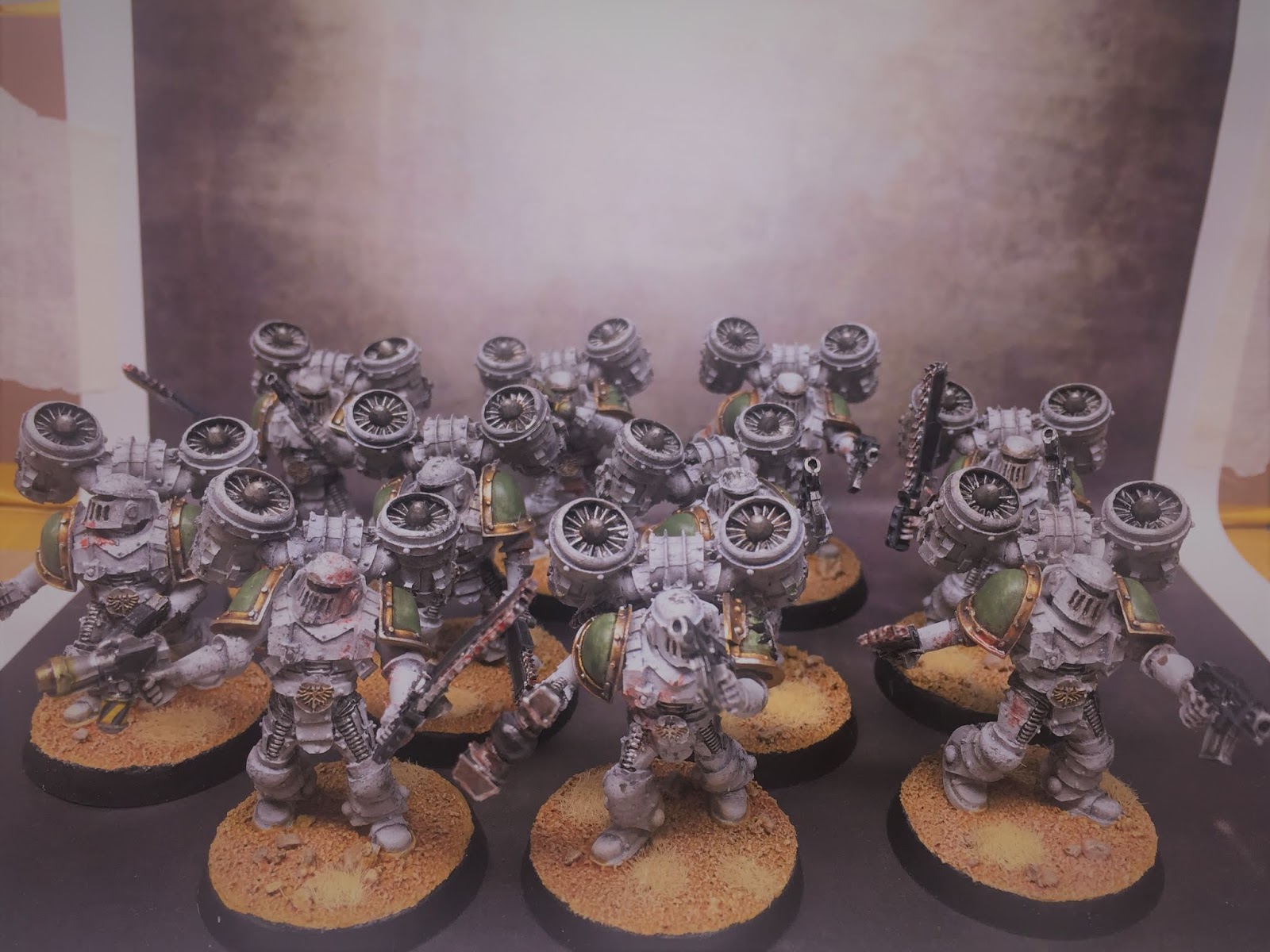 As this is an army project its about being able to pump out large numbers of models in a relatively short time so my white recipe is:

Done whilst the baby has her nap. Now for the rest of the skeletons! #bloodbowl #painthammer2019 #squaduary pic.twitter.com/73DKcBiQoM

Update on my #squaduary pic.twitter.com/Dm6ivWVr4o

Back to work on #squaduary, blah I hate ugly first coats. Using @brushwizard 's recipe for AdMech, his first step should just be: "dunk in Rhinox, worship the warm, chocolaty brown, continue on" pic.twitter.com/69RSX22ThP

One week to go folks! Who can get across the finish line?