At the end of Squaduary 2019 week 2 we have a lot of a progress. I know I will have missed a few people from the list below but hopefully they can let me know on this post or Twitter. I am delighted to see so many people joining in already.

Week 2 already and the event is flying along. We have a lot of models being built and painted. 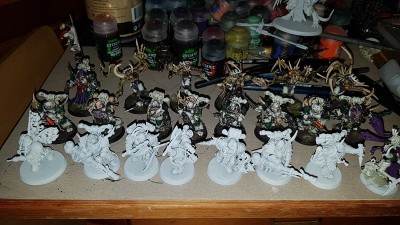 This month has been a busy month painting up models in points blocks for a campaign at my local independent games store starting with 500pts. Pictured is everything I’ve painted this month so far and my pledge for Squaduary (undercoated at the front). The pledge is my first 250 pts block increase for week m&s 3 and 4 of the campaign so needs to be completed by the end of the month! It works out nicely with Squaduary. A friend told my that my acolytes looked like they were wearing rubber gloves so I did a little bit of detail on em. But still some ways to go. I sadly haven’t had much time myself this week and only got two of my Ork warbike riders built, not even undercoated! I better catch up. 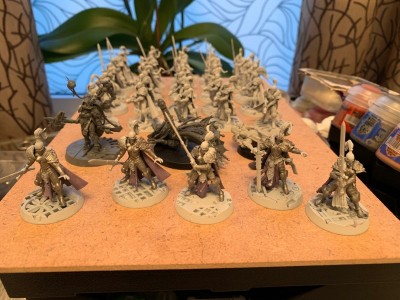 Yet another busy work away from the painting station, but have managed to do some colour experiments and settled on the colour scheme – Blue Steel for the armour, Light Green with Purple lining cloaks. Going to use golds for the fancy trimmings and trappings, with a mix of fur colours to create a same but different look. 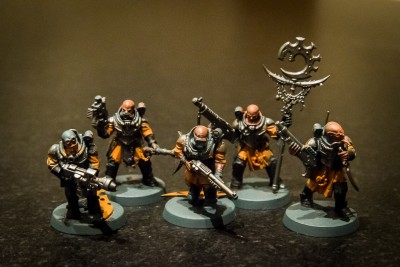 I’m happy with my cultists, next I’m planning to add the correct skin tone, and to colourise the metal how it’s meant to be. Then once that’s done I’ll go over it with a wash to tone it down and give it a more worn out industrial look.

First, an apology, I missed last week as I had to go up North to Edinburgh for work.

Hellions, by the gods they’re fiddly wee beasts to paint. A right pain in the backside.
I’ve made some good progress on them – the base coats are mostly done and I’ve got a bit of shading on the skin tones and on the skyboards but.. they’re just so small and the tiny wee parts just get frustrating so I cave. As well as doing the Hellions I also started work on a Primaris Reaver – it’s not a brilliant job by any measure of means but I just needed something that I could randomly drybrush and KNOW that I would get a passable job out of it. 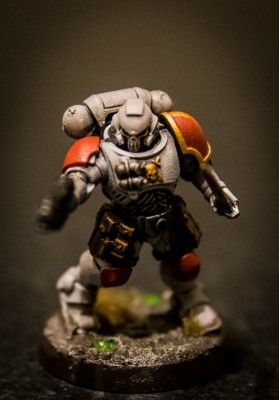 It’s one of those bizarre things.. I know a lot of players never move past Astartes (hell I still have a marine army and love ’em) but I had never ever realised just how easy it is to paint marines until I got involved in painting Dark Eldar….. it’s just bliss.
Anyway – here’s some pics, I’m not enamoured of the quality of them, I can (and will in future) do better but I was a bit pressed for time this evening so … here you go. 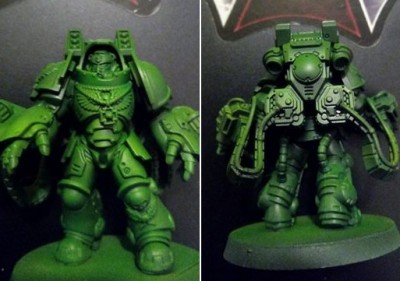 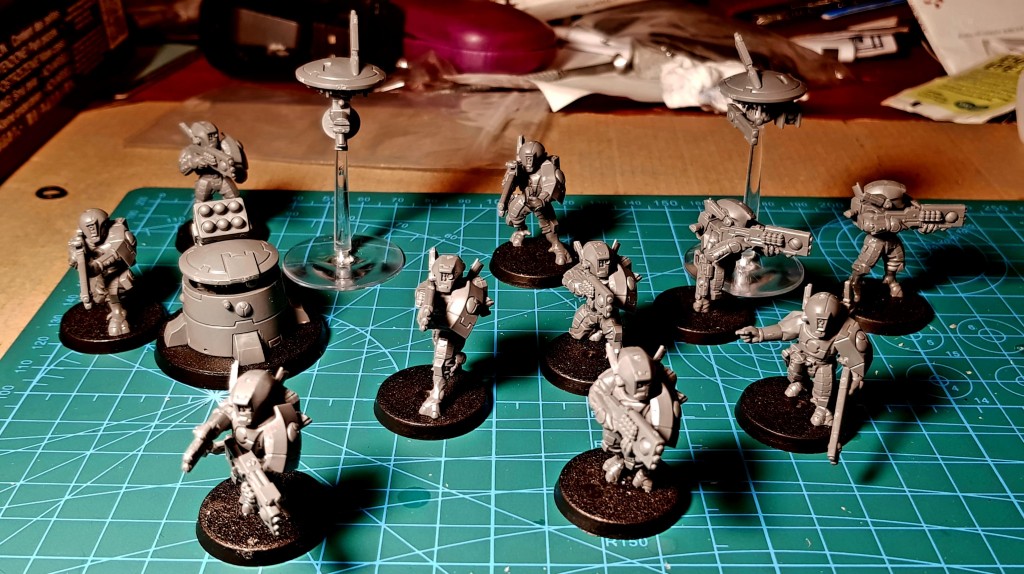 The squad are assembled and the forgeworld heads made the armour look grotesquely oversized but I suppose that adds to the Space Marine look. Grapnel Sarge voted miniature most likely to return in >1 piece from any excursion.

The kids have chosen the colour scheme so I’m in the process of slapping on paint. Looks like they’ll be a successor chapter for Minotaurs not Black Templars… All the yellow started, the chassis is silver and had it’s first wash.

Not sure if I need to go a tad brighter or not with them, I’m thinking needs to go a touch more on the white scale.

Miro
[No update this week] 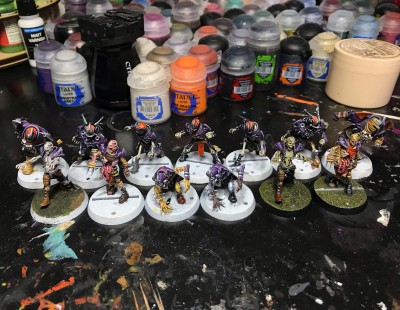 I’ve got the team all painted up, magnetized for my case, and it’s time to do some basing. 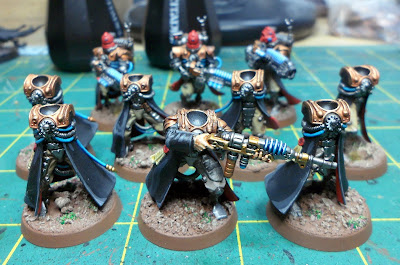 This is where I am after two weeks of Squaduary, progressing well, smashed out the two remaining Plasma Caliver Vanguard Skitarii, they all match pretty much so I am quite pleased (the original one from two years ago is the one on the right). 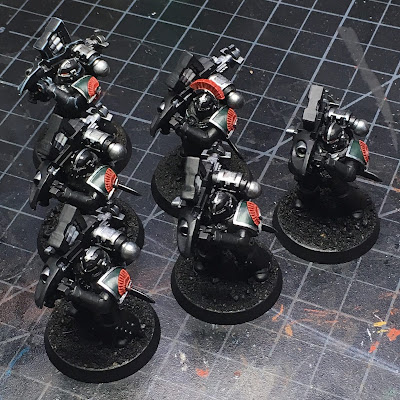 As I close out the first week of effort, I was able to clean up the black armor and get some shading done on the armor and equipment.

Once more I join the challenge of painting a squad in February and present it as you go. My first idea was to paint two squads of 3 harlequin skyweavers, but in the end I decided that it would be only one of 6 units.

Pretty good progress this week. I’ve got the base colours for the skin/chitin and the hard parts of the environment suits done on everyone, and the orange cloth done on just over half of them. The chitin/Stealer flesh looks hideously garish right now, but it needs to be like that to work right after I ink it. 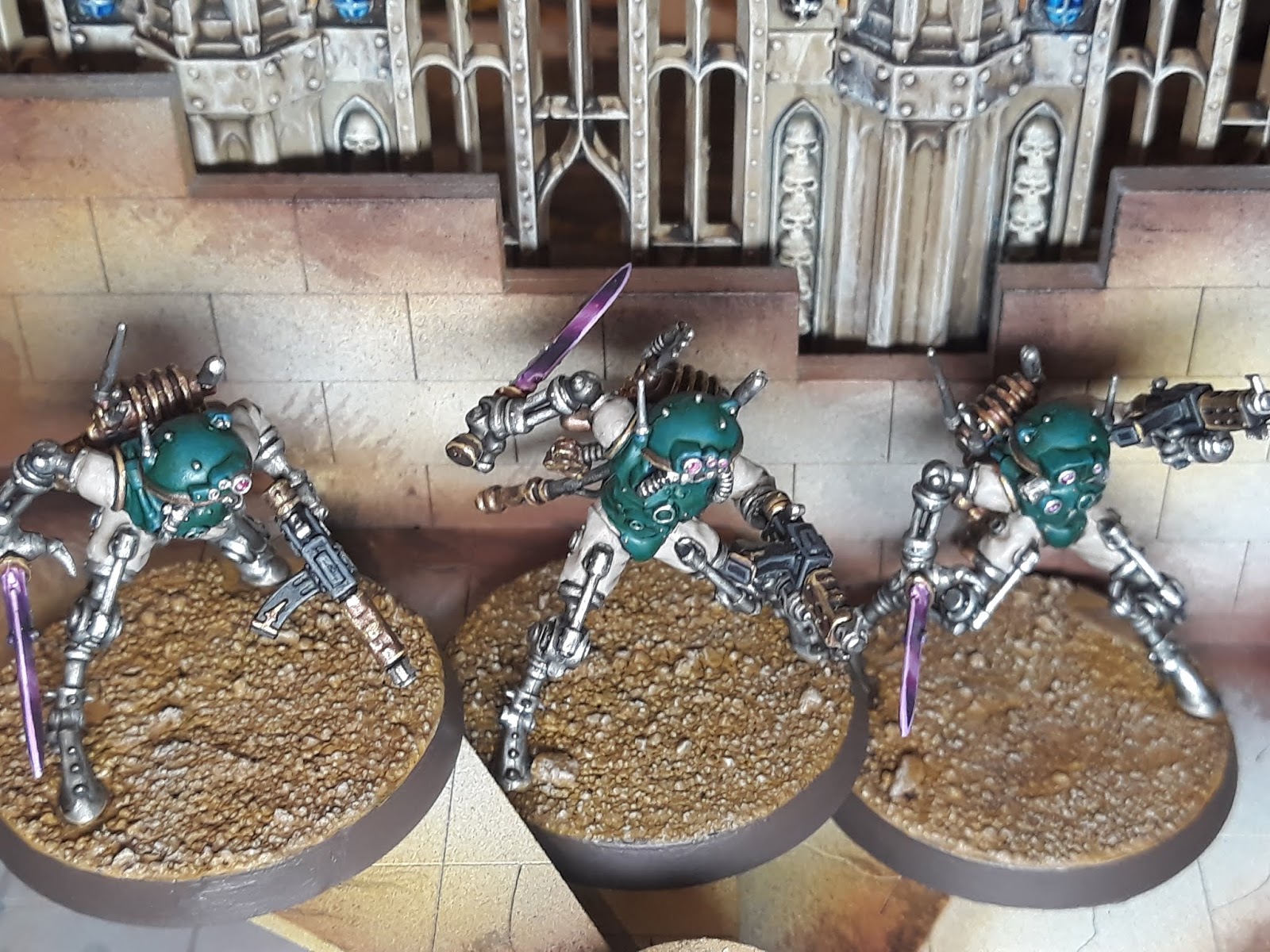 Well, it’s been a bit of an odd week this week. I have made some great progress with the Infiltrators but haven’t taken too many photos.

Back to making progress on the inquisitor Kill Team for #squaduary. pic.twitter.com/fLnrlXcGX3

Finished the nurgle tainted Iron Warriors. Working on a back story for the Rust Brotherhood that believes they failed the siege due to weakness, weakness that can only be purged with clarifying rust. #ironwithin #squaduary #warmongers pic.twitter.com/YrUo6vgMMu

First player done! Just need to finish his base of. Getting on with the rest of the squad now! #squaduary #Painthammer2019 #bloodbowl pic.twitter.com/unkYzYIRVY

Slight change of focus now, 27 of these is my target for #squaduary #wh40k #paintingwarhammer pic.twitter.com/c5J1zRLxwS