Behold the glory of LED illuminated space marines, not only that but true scaled versions. For any of you power armour fans who don’t visit Bolter and Chainsword you are missing out. It is a wonderful forum, chock full of people sharing ideas, events and stunning miniatures. It is the place I came across Bob Hunk (what a name) and asked would he answer a few questions for us.

Who is Bob Hunk and why does he game? 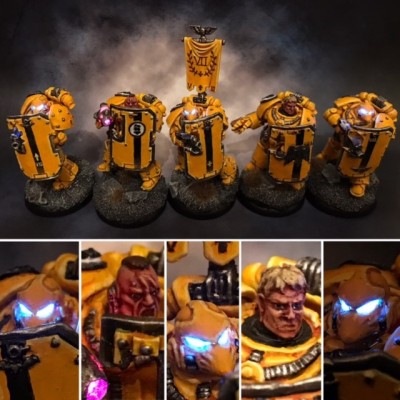 By day I’m a scientist, husband and father, but by night I’m a gamer and miniature painter. I originally got into Warhammer 40K way back in 1993, right at the tail end of First Edition. The grim dark imagery really captured my imagination, particularly the clash between Space Marine Terminators and Genestealers in Space Hulk. Now it’s 24 years later and I’m still going strong! Real life being as time consuming as it is, I don’t get as much time for gaming as I used to, probably only once a month, if that. But I can still find a few evenings here and there for painting, and enjoy sharing my work on Instagram and my Bolter & Chainsword ‘Team Fisto’ true scale Imperial Fists log.

You are known for your true scale, with LEDs, conversions but what led you to create them?

Team Fisto started as a group project for my games club, the Plastic Crack Rehab Clinic, or PCRC for short. We were attending a Horus Heresy themed campaign weekend run by the Tempus Fugitives, and decided it would be fun if we could all stand on the walls of the Emperor’s Palace together. This was actually a good three or four years before the first Forge World Heresy book, so the event organisers had their own big pack of house rules and we had to convert a lot of models! 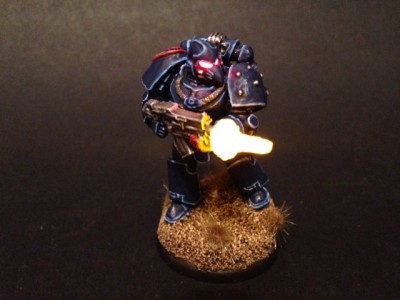 Although my first version of Team Fisto started off at normal scale (using a lot of the old RTB01 plastics, I’m a real fan of MkVI power armour), I was inspired by my friend and fellow PCRC member Apologist’s Praetor’s of Calth and StuntWedge’s Imperial Fists to have a go at my own true scale version. Additionally, my friend Omricon put together some Thousand Sons Rubric Marines with LED effects. I decided to combine the ideas of true scale and LEDs, and ran with it from there. Everyone online has been very complimentary, but I wouldn’t have started without inspiration from the other members of the PCRC, so thanks again guys! Being part of a great games club is a real boon to any hobbyist, as you become such a melting pot of ideas and techniques.

What is your favourite miniature or conversion to date?

Now that’s a tough question! In terms of Team Fisto, I’d say I’m most proud of my Tactical Vexilla

and my Volkite Charger

How large is the army so far?

The problem with Team Fisto is that I keep having new ideas and starting again from scratch! The current true scale LED version of my Imperial Fists is actually the third version if this army. If I put everything that is in a game worthy condition on the table then I just scrape 2000 points. This is using Forge World’s Legiones Astartes: Age of Darkness list, which the army is primarily designed for. If I’d kept going at the same scale then I’d be at well over 6000 points by now. Ah well, c’est la vie!

Unfortunately I don’t have a good group shot of the whole army at the moment, as the brightness of the LEDs make them weirdly tricky to photograph with digital cameras. But here’s a group shot of the Veteran Tactical squad.

What can we look forward to in the future?

There’s plenty more to come in the future from Team Fisto, including more Legion Breachers and more Dreadnoughts. Also I’m totally on board with Primaris Marines and am planning a force of Primaris Crimson Fists. But that’s not all, as I’m also working on true scale Sons of Horus for a joint 30K project with Apologist. So watch this space I guess! 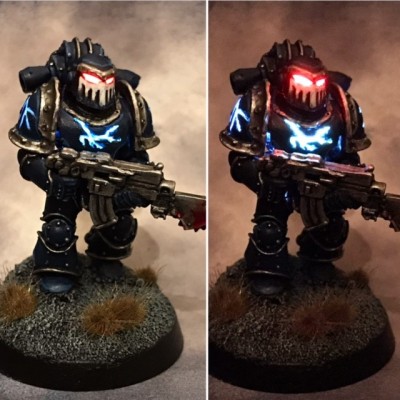