With five days left on the Kickstarter for Armoured Digital I got to chat with the designer. The project is already more than funded, with some nice stretch goals unlocked as well.

This is one I am following with great interest. Who doesn’t love drone tanks shooting each other up? If you liked the aesthetics of Red Alert: Command and Conquer, then this will be a good one for you.

SBG: What makes this a stand out game?

Chris: Armoured Digital has a range of features that make it stand out amongst other miniatures games. Chief amongst these are the orders programming system and the ability to build new units during the game, but there are plenty of other elements that make us different, including points-free list building and scissors-paper-rock damage system.

The orders programming system is the core of the game. Players don’t automatically move and shoot each of their units, instead they have a deck of orders cards to choose from and alternate playing each card on their units. If you want a unit to do something, you simply have to select the card that best achieves it and play that. Each unit can have up to three cards during a turn, so it’s entirely possible that some drones get worked to the limit during a turn while others don’t do anything. Cards are designed so that they are all on the same approximate power level, with variations that give bonuses in some areas and drawbacks in others. There is a wide array of different actions that players can select from, including moving, shooting, activating specialist systems, invasive reprogramming of enemy units, boosting certain stats or supporting friendly units. 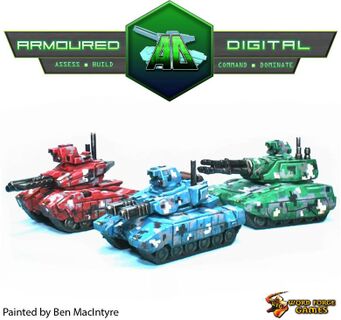 Building new units brings a range of new tactical options to the game. Have you got a poor matchup against enemy units (for example, does the enemy have all aircraft and you have no AA units)? If so, just abandon some of your units and build the appropriate one in its place. The battle going poorly for you? Choose the right units to counter the enemy’s attackers. There are also resource-gathering aspects to the game, where transports race in to the centre of the table where automated mines produce resources for players to capture.

Will this game be a once off or will expansions happen down the line?

This is an ongoing game. We have plans for a wide array of new units, game modes and other expansions that will give players more options to game with. While board games often follow the same sales model as books, with a big release that then trails off after a short time (of course there are exceptions, but this is the reality for most), miniatures wargames are a game system that players can keep playing for long periods of time. Every game is different, and with the depth that is built into both the game and the expansions Armoured Digital will be a game you can play for a long time to come.

What is the background of your company?

Word Forge Games is a UK-based games manufacturer. They have developed or licensed a range of different games to date, from the Mad Max-esque Devil’s Run and the fantasy football game Gore Ball to board and card games like D-Day Dice and Cheekz. The team have run a number of successful Kickstarters over the last few years and are well adept at both running and delivering on them.

I’m the designer of AD, and have licensed the game to them. This is my first Kickstarter, but I’ve had dealings with Mark and Dom for a number of years (and that’s a big part of why I pitched AD to them in the first place!) 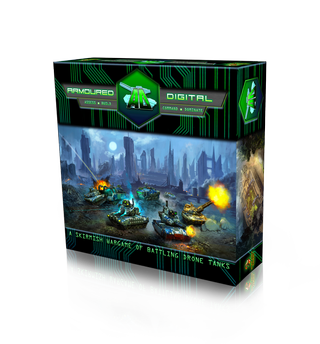 Do you view Kickstarter as the only viable platform for smaller companies to launch games currently?

It’s not the only viable platform, but it is the biggest. When launching a game in an industry dominated by two titans and a number of other large players, it’s difficult to be heard when you’re a small company. Kickstarter does give the initial funds needed to get the game going, but its primary purpose is as a marketing tool: we can invite the public to come along with us on the journey as we release, and have a ready-made community at the start. While we could have avoided crowdfunding altogether and taken a crack at a direct release, it’s a large risk for a small company to take (particularly in an environment where many other games are being released based on a popular movie, TV show or computer game rather than a new and unique setting). Promoting a Kickstarter means that a whole lot of companies are interested in taking a look at it, and we can show off our game to a whole range of people who are early adopters.

That said, as this game is based on a new and innovative style of gameplay, we’re expecting it to be a bit of a slow burn over time, with independent reviews confirming what we’ve seen in demo games: that this is a great game to play, easy to get into and yet with enough depth to keep it fresh after many, many games.

Pizza, with or without pineapple?

With! Absolutely. Maybe those people who don’t like it aren’t getting the lovely fresh stuff we have in Australia. But then again, my kids refuse to eat pineapple so I get to eat theirs, too.