I’m back, with more Nurgley goodness than before! Last time I wrote for the site it was still months off 8th edition. With the advent of the 8th Ed. release, there was obviously only one army that was going to grab me and hold my attention: Death Guard – Nurgle’s finest corrupted servants and my personal favourite heresy era legion, brought into the 40k era with their own codex and special rules. I will do a series of articles on my Death guard Army as is comes together but I thought I would start you with my first fully painted model: Typhus, herald of Nurgle.

Firstly upon seeing the GW stock photos I wasn’t impressed. His pose seemed off and the scythe blocked the view of the clouds of the destroyer hive coming from his back vents. It seems very static and not very natural. I decided to change that. I swapped his right and left hands with some from the Dseathshroud box (specically the champions scythe hand and scythe head and the clenched empty fist). Typhus hands went onto the death shroud champion so weren’t wasted. I also added some more bugs. These came from the AoS Drycha kit and whilst not a perfect match for the existing bugs when painted would blend in and allow for more of a sense of purpose in the models pose.

I had decided early on that I would not do the Green Death Guard colour scheme that GW recommends but instead would go doe an off white as this has always been the way Death guard look in my mind, a pure white, sullied by disease and decay.

Below you can see my base colours. The model was sprayed white and then washed in Camoshade. The smoke and bugs were painted in the Oxide technical paint. 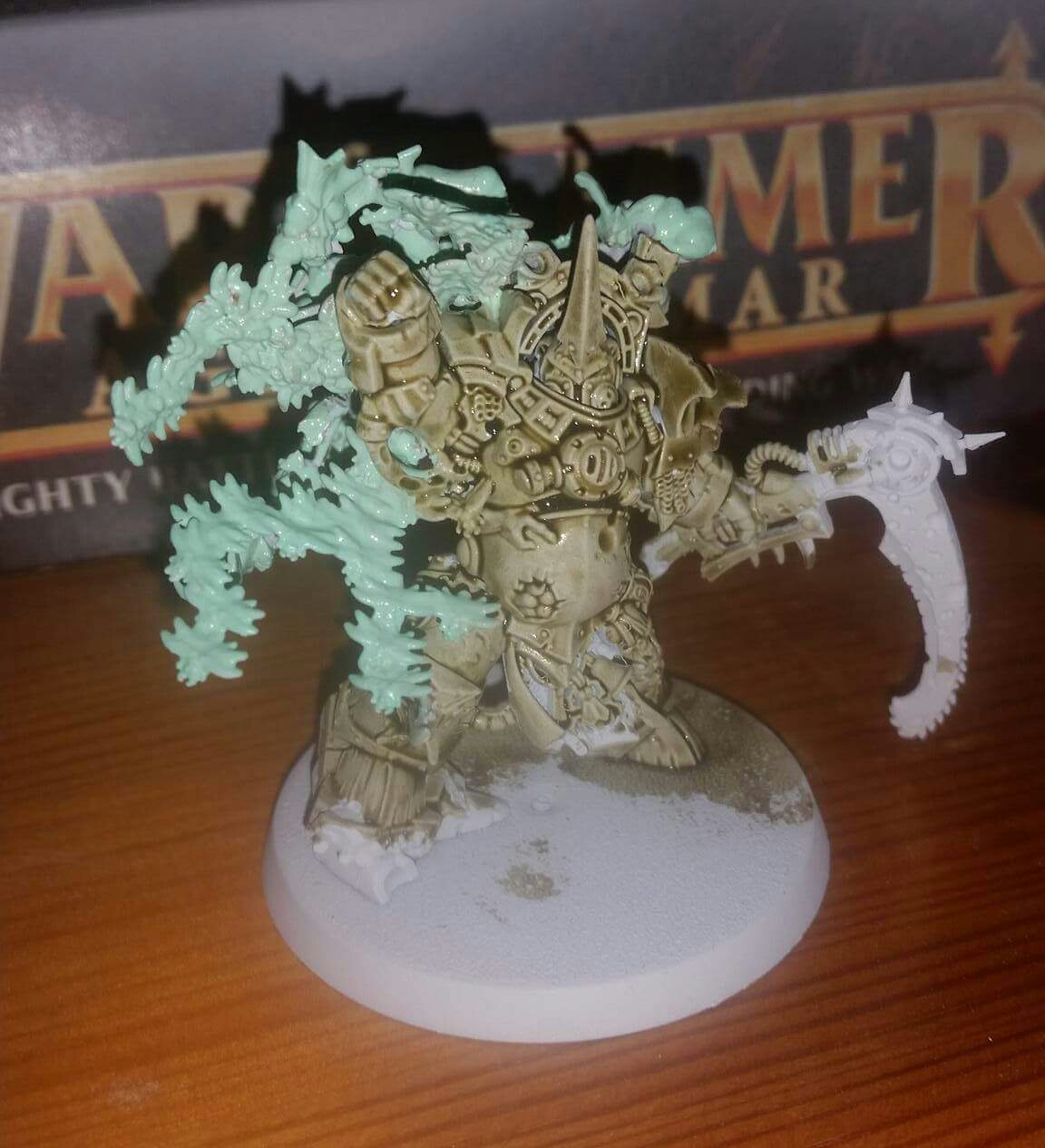 Then it was onto the next base layers. The whole model is given a dry brush of pallid flesh to get the off white colour, including the bugs. For the bugs I then used the Bieltan green wash to brighten them up before dry brushing them again the second time to produce the ghostly glow effect. Metal trim, bones, pipes, sores and the eyes were picked out as you can see below. All my characters will have purple cloth to make them stand out whilst non character robes will be more bone/browns, so they blend in. Typhus doesn’t have much cloth but what he did was done in the base purple. 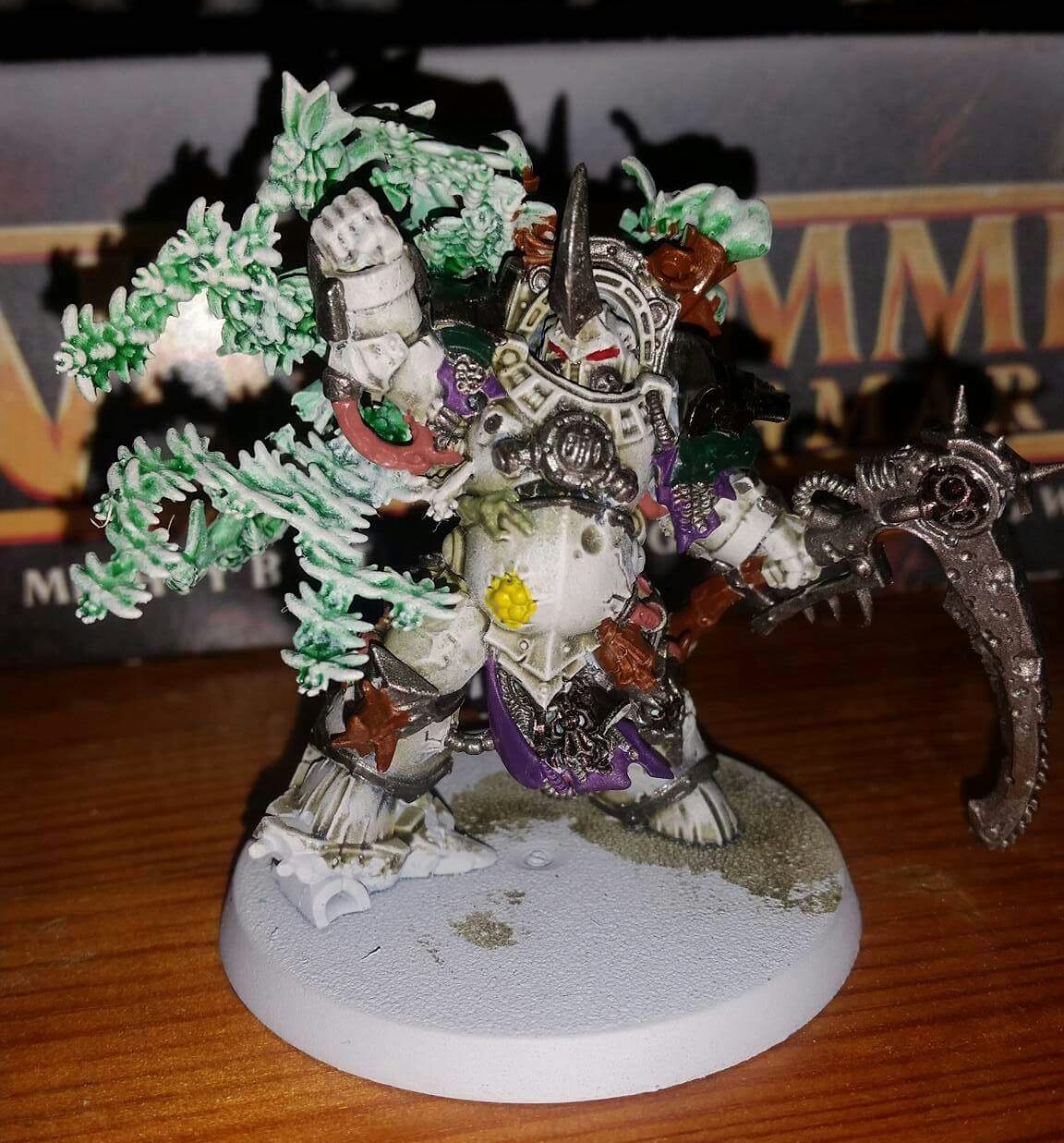 I then went on to do the highlights on the afore mentioned parts. I held off on adding and grime or similar effects until the end so to make sure the discolouration was continuous over the layers beneath it. 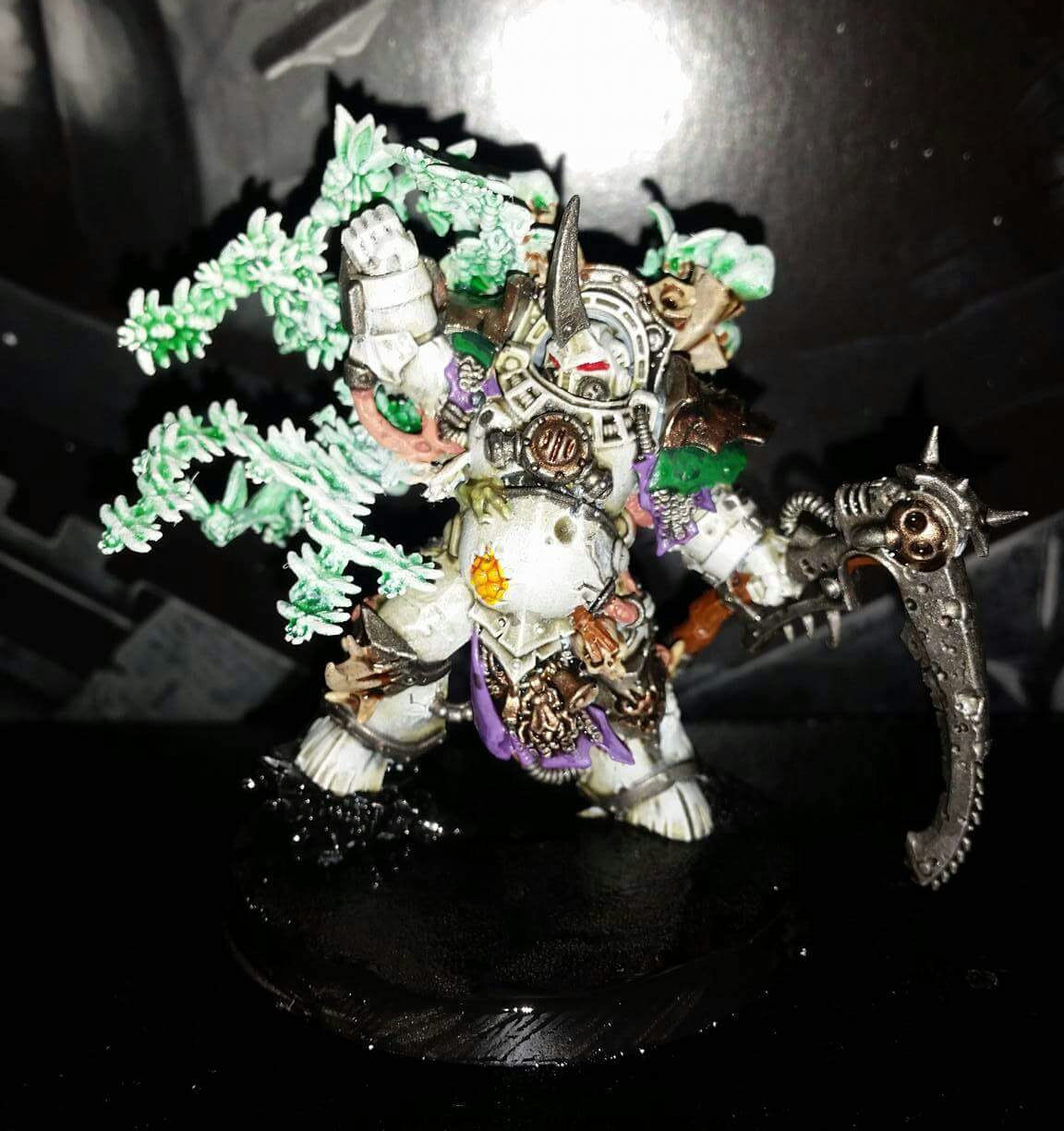 I then added grim and rust effects. I used the Ryza rust dry paint for the rust, with a light dry brush building up in certain areas slowly rather than over loading the brush. This gives a more normal effect and the discolouration is blended fairly well. The leaking grime is done using GW Gloss Agrax Earthshade wash. Once again I didn’t go over board in this, mainly using it to break up large areas of the off white. I let it drip naturally from its source point at first then removed the excess with a clean brush. 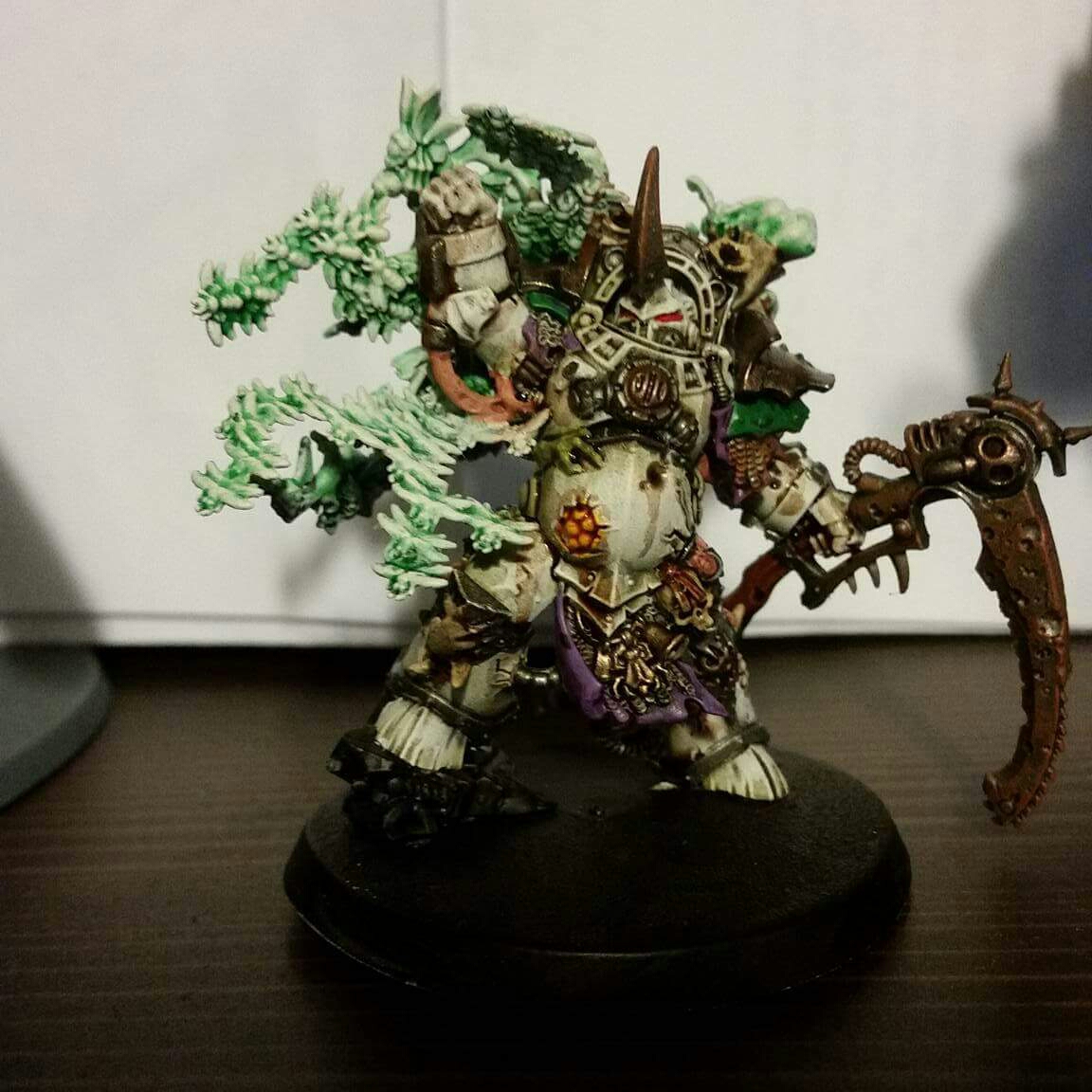 Now the stock Typhus comes with his foot up on a tiny rock and a big empty 50mm base. I didn’t think this was impressive enough for the herald of Nurgle so I raided my pile of basing stuff and put together something a little more suitable. The stairs are from the GW 40k hero base set and they have been mounted on a 50mm base to ensure Typhus remains on the correct base size. I kept the base relatively dark, but did use some pools of Nurgles Rot technical paint to add splashes of colour and slime to it.

So here you have it, my finished Typhus, Host the of Destroyer Hive and Herald of Nurgle. I imagine him standing there commanding the destroyer hive out to corrupt his foes with Nurgles blessings. 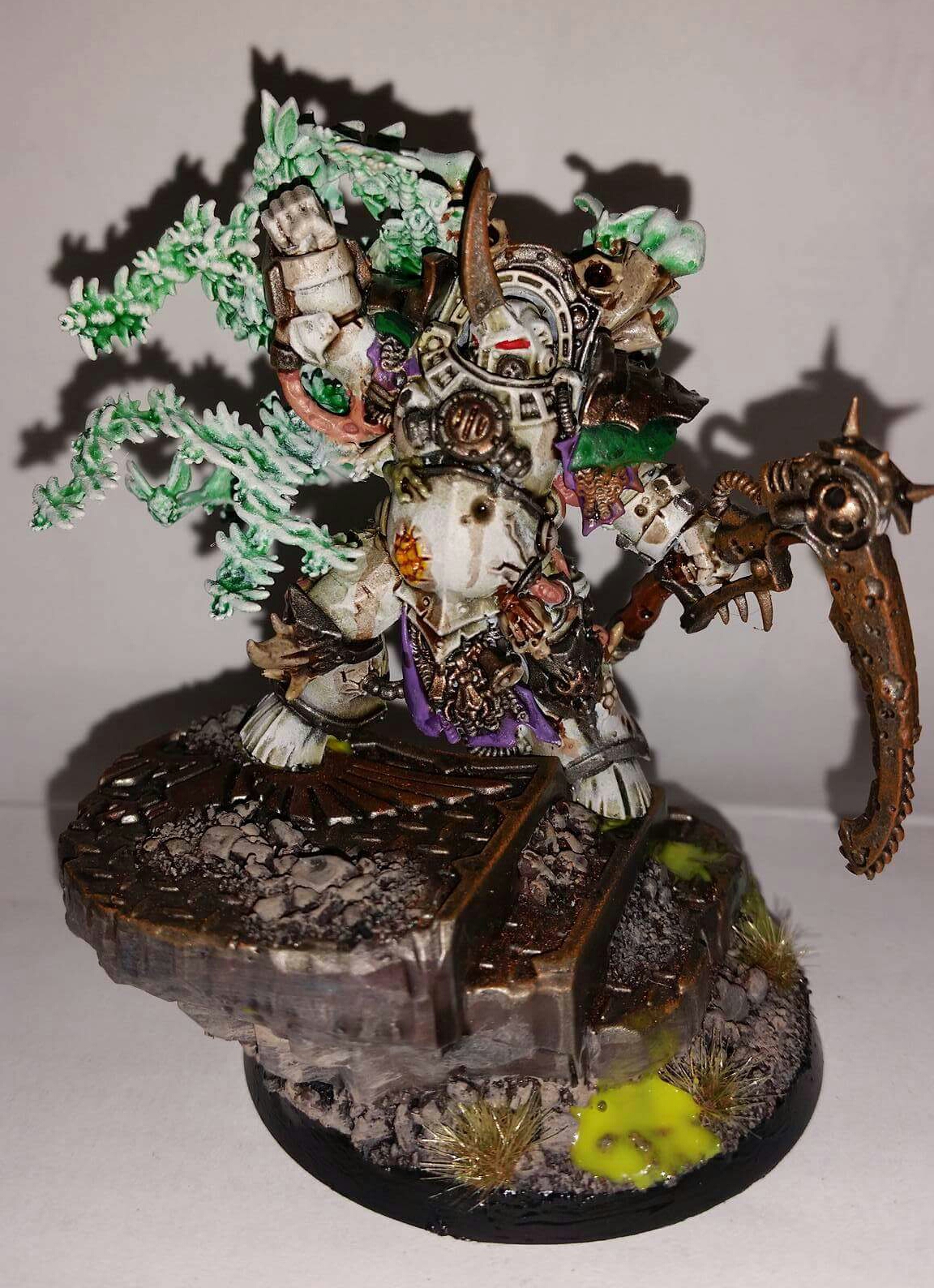 So tell me what you think? I shall be back soon with more of Nurgles goodness!