This will be a series of articles on how to improve your paint, next we have brushes

. Edwin Moriarty is a commission painter and games developer living in Nottingham, UK. Keep up with his latest projects on Instagram.

Now we move on to the essential tools that are used to apply the paint to the models. The ancients called these… Man I dunno. Bunch of different things probably. Who cares, they’re dead now.

Citadel brushes are a strange beast and this is the article in which I’ll probably be most critical of geedubs, because man some of their brushes are bad, and most of them are badly overpriced. That said, I do still use them for a lot of my painting, because better replacements for everything isn’t easy.

At the moment GW sell a number of different types of brush, most of which come in a couple of sizes. The types are:

A lot of that list will be familiar to you after the last article, and indeed the intention is you will match the brush type to the paint type for best results. That doesn’t always work, however, and there are a few curve balls in there, so let’s dig in a bit further.

Some stuff about brushes

Just like with paint this will all make a lot more sense if you know some stuff about brushes, so let’s cover the basics. The kind of brushes that we use were originally intended for watercolour painting. That’s because we use such fine pigment paint with so much flow that standard acrylic brushes, which are much stiffer and coarser, aren’t appropriate.

Watercolour brushes were traditionally made from animal hair like most artist’s brushes. The general consensus is that the best material is kolinsky sable – the tale fur of a kind of Russian weasel. These animals are farmed specifically for this, and the very finest quality brushes are made from male red sable.

Weasel arse hair is surprisingly pricey, however, so alternatives have sprung up. Some other hairs are used, but the most common alternative is synthetic hair. This is plastic, and is much cheaper but generally considered much less good than sable.

GW uses a mixture of different hairs and synthetics in its brushes, as they’re useful for different things. All their brushes are made by veteran brush makers Winsor and Newton

, though to the specific requirements of GW.

Base brushes are intended for the application of base paints, and more broadly all base layers. They’re a blend of cheap sable and synthetic, and rather stiff, so you can more easily push paint into crevasses without the brush point splitting. However, like many synthetics, they have a tendency to curl – the head of the brush slowly bends over at the tip as the bristles contract at different rates. This is a quick step to a ruined brush.

I honestly wouldn’t recommend them. They wear out fast due to curling, and some cheap brushes from a craft store will do as well.

Layer brushes are much softer than base brushes and intended for use with layer and edge paints. You can also use them for glazes and shades without any ill effect. They’re pure sable, but of middling quality, but they very much do the job. They’re also a good length of tip, generally well made, and last.

Layer brushes come in a small and medium, and I would broadly recommend them. Particularly as the quality of high end sable brushes has fallen, you’ll find these nearly as good and decently cheap. You can buy alternatives at W&N direct but those have longer bristles for watercolour painting and aren’t always that useful. I do much of my painting with these brushes, including a lot of base coat application.

These stiff brushes are a mix of ox hair and synthetic fibres and are intended solely for dry brushing. For that purpose they work great, and it’s hard to criticize them. They come in small, medium and large, and are all flat headed.

These pure ox hair brushes are stiff and really designed just to hold a lot of paint for efficient application of shade paints. They come in round head medium and large, and are… fine. They’re basically unnecessary but they do the job. 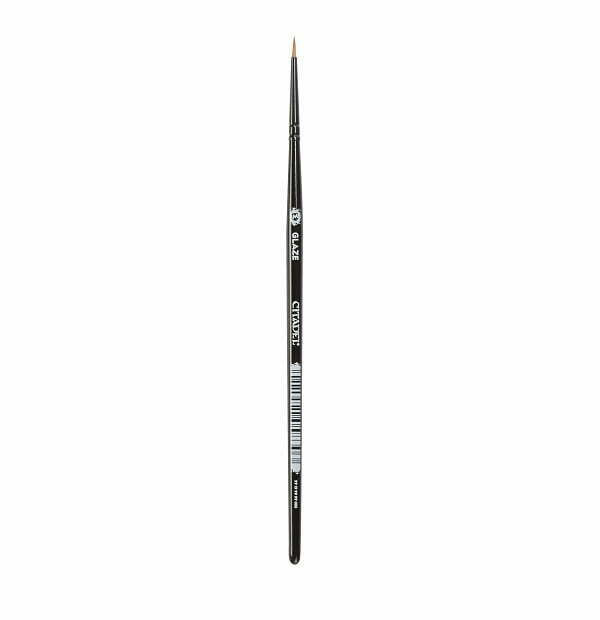 A completely synthetic brush for… some reason. Comes in a medium. I have no idea why this exists, it seems to be totally useless.

These large brushes are intended to let you paint very large areas quickly and efficiently. They’re synthetic but a soft fibre, and really do the job well considering the price point. There is a medium round and a large flat, but both a big brushes.

So I put this one off until last because it’s most complicated.

Artificer brushes unlike the other brushes were created entire for GW’s internal benefit. The Eavy Metal

team when they were told that they needed to stop using W&N branded brushes wanted replacements for the small size Series 7s they used, which at the time were probably the best brushes of their kind in the world. GW’s solution was to get W&N to make them some new citadel branded brushes to fill this gap at the same quality standard of their premium Series 7 range. Thus, artificers were born.

To start with there was no doubt that artificiers were excellent brushes – they were just Series 7 brushes after all. But at that time the advice would have been “Just buy Series 7 and don’t pay GW a surcharge for branding.”

In recent years though, things are not as clear cut. The quality of Series 7 brushes

has tumbled and while some painters report brushes nearly as good as their previous quality, getting one like that seems potluck. This decline is due to difficulties in securing high quality sable and is a problem for all premium sable brush companies. However as Series 7 has declined so has the artificer series. It is hard to recommend them over the cheaper layer brushes currently.

They come in extra small, small and medium, but I would honestly say save your money. There are some premium brands out there still (Broken Toad and Rosemary and Co are commonly recommended) but stock issues are chronic.

Next time we’ll look at hobby accessories and how they fit in.

For more in the series see: