For this post we have Tom_PaintsStuff and his adventures in the current tournament scene.

“I took Tau to an event and all I got was this lousy wooden spoon.” -Tom

They’re super hot right now, the codex is really strong, and I’ve always had a special place in my heart for them. I suspect at least part of this is due to the unreasonable amount of hate they have traditionally gotten from the community. To this day folks still complain about their introduction, despite them being older than many players.

So with the release of the new codex I broke out a Tau army I had sat in the shed, and decided to try it out, and oh boy the reports were right, Tau are now both big and clever. I played a few games with them, and declared to the world that Tau are so broken “even I can win with them!” This sentence would come back to haunt me.

Still riding on this feeling of power, and wondering if this was how all the Ad Mech and Drukhari players felt last summer, I signed up for the Twisted Dice one day RTT in Leighton Buzzard. This gave me a week to get my Tau painted up, but as I am known for my frenetic painting speed this was not an issue and by the Saturday before the event my pink abominations were ready for the table. 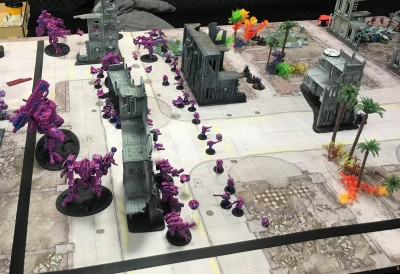 I heard that the hotness was in Bor’Kan, so I built to try and take advantage of their filth. -1 strength from ranged attacks against battlesuits seemed to be a strong direction, so I went with:

Coldstar commander with high output burst cannon and the signature system burst cannon (ignores invulnerable saves). Warlord trait for mortal wounds on 6s, and a relic shield generator. The theory is he can move around really fast and put mortals on stuff. Probably turned out to be the most underused thing in my list.

Fireblade with the relic markerlight and Examplar of Kauyon. The warlord trait gives him 1-3 redeploys depending on if I take Kauyon or Mont’ka. Seemed really good, did not use it well.

2 x Ghostkeel
I love the model and felt the forward deploy would be great, I’m still on the fence about them.

Stealthsuits (3)
Again, wanted to use them to screen, did a bad job of this.

Crisis unit with fusion, flamer, and missiles.
Theory was to create a multi-role unit, they turned out to be bad at all things.

And now, the elephant in the room:

I took a Stormsurge. There is a lot of buzz around the Stormsurge, and I LOVE the model. But, well, it kinda sucked in reality. Probably more to my own poor play, but I am still not sure it was worth the 300+ points.

Twisted Dice are a lovely bunch of folks. I have had issues with their scenery levels in the past, but felt this could only be great for Tau! However, they have dramatically increased their terrain levels, mostly to the better (except game 3, which I will explain later).

Playing in a British Legion backroom, nice but a bit cramped, got very noisy with all the folks in it.

I drew against a demon player. This was baffling to me until I realised that it means disciples of Be’lakor. Now, I won’t lie, I hadn’t really looked at Belakor’s rules prior to this. He came out, the model was cool, the rules were long, and he didn’t see play. Great.

But knowing I was playing him in round 1 I read the rules, then my heart sank.His whole army has -1 to hit at distance. All of it. This is gonna Suuuuuuck.

Then I saw the table and realised we were playing lengthways, and there was a big line of dense across the middle, so even if I put marker lights on units, they would be -2 to hit, so I would still be hitting on 5+.

But wait, it gets better. The other part of that ARMY WIDE ability is no rerolls to hit. So now my shooting heavy army is hitting on 5+ with no rerolls you say? Good stuff, good stuff. 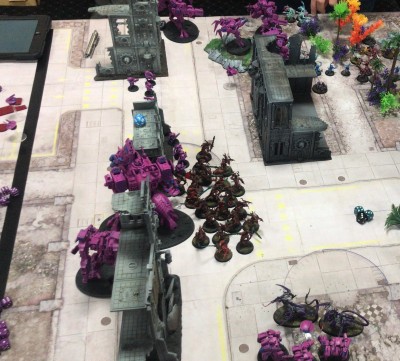 I played as best I could, baiting him forward with big robots then going into Kauyon to redeploy back. I wanted to survive two turns by screening, then go into Kauyon and sweep the board. This is almost exactly what I did, but by turn 3 he had got me off all but one objective, and I had to work really hard to make the points back.

Ended the game with a 79-69 loss, and a newfound respect for Be’lakor.

I thought to myself, “Ok, that was a really hard counter to Tau, I can’t hit that again, next game I will fully embrace the awesome might of the greater good!” (Or words to that effect.) My heart soared to hear I had Ultramarines. Surely, if there was a good match up, this was it. His list was…. Interesting. He had an army almost entirely made of eradicators, which was going to be horrible for my big robots. But he also had three, count them, three, of the punisher cannon gladius tanks. I have literally never seen one of these on the table, but thought they would be some easy points for me.

Especially when I looked at the table. 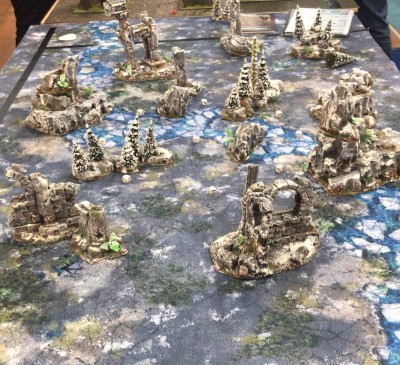 My opponent placed a lot of eradicators into outflank, which was worrying, so I decided to counter by using Exemplar of Kauyon to place both riptides and the Stormsurge into outflank, this was probably an error, as I could have taken the open table turn 1 to try and sweep what he had on the board. However, by far my biggest issue in this game was pure fatigue. I was already flagging and I played terribly, at one point realising I had forgotten which secondaries I was playing, and assumed I had taken To The Last (I had not).

By the time the dust settled I had, once again, almost tabled my opponent, but lost on points a humiliating 96-66.

Alright, this has been a rough day, but I don’t think it can get worse.

I got the mirror match into Tau.

But not just Tau, better Tau. My opponent was a long time Tau player, and his list took devastating advantage of all the tricks in the book.
This is where the terrain really bit me in the arse. The table was entirely LOS blocking ruins, with a huge central channel down the middle.

We shook hands, put down models, he rolled a dice, I rolled a dice, he took the first turn, I picked up ⅓ of my army. I was kicking myself for not using the exemplar ability to hide my big robots.

I played it out but I was struggling with both concentration, fatigue, and morale. Losing the Stormsurge and a bunch of other stuff in turn 1, and knowing I was going to struggle to put down the sheer amount of good stuff on his side of the table, I gave up and put up a cursory resistance. I ended being essentially tabled and giving up a 91-12 score to a nice guy.

Somewhat humiliated, and with a D&D game waiting at home, I packed up and scurried away. What little morale I had left in tatters. 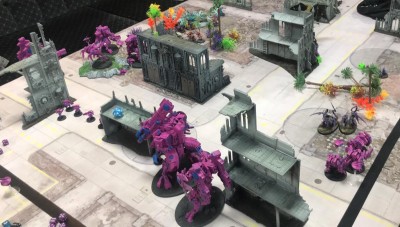 In the aftermath I had time for some soul searching. Time was when I could go to events and consistently end on the middle tables, but that time has gone. I need to spend time rebuilding my playing skills and my mental endurance, as well as focus on a single army and improve playing it. I have a tendency to list jump as I like variety, but if I want to improve this is not going to be the way to do it. I did not enjoy the experience of an 0-3 finish, so I am determined to put the time in to change this.

So there we have it. I went to a tournament with Tau, and did not destroy my opponents. My hypothesis of “Tau are so good even I can win with them” is thoroughly disproven. In fact, I have proved that “I am so bad, I can even lose with Tau!”

2 thoughts on “Tau with a Stormsurge got a wooden spoon?”