So while we are all working away on #Squaduary I thought I would look at around and see what my friends are doing. While collecting images for the next big post I found three of my friends from 9th Level Games were doing a Kickstarter. So I managed to grab one of them, Chris O’Neill, and wring a few questions out of him. 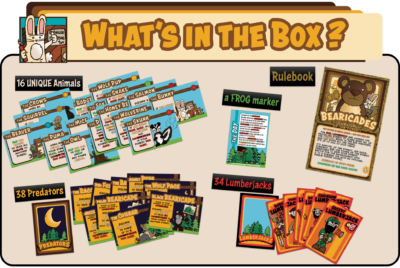 What you get in the Kickstarter for Bearicades

So Chris, tell us all about your gaming credentials?

My credentials are strange and mysterious. I have been playing games forever – and cut my teeth on Dungeons and Dragons in the early 80s. By the 90s, I was making my own games and writing for other RPG companies – as well as playing competitive Magic. 9th Level Games “arrived” with the first printing* of Kobolds Ate My Baby in 1998.
In the early 2000s we published or wrote a bunch of humor RPGs, including Cthulhu for President (for Chaosium) and Ninja Burger. In 2013, we got back into the indie game scene with a KAMB Kickstarter that has lead to us putting out games steadily for the last few years – including Knuckle Sammich, Schrödinger’s Cats, Food Truck Destruction Derby, Demon Realms, and now BEARICADES!

*We can’t really say publication because the original Kobolds Ate My Baby! books were printed on a stolen xerox and hand folded and stapled. 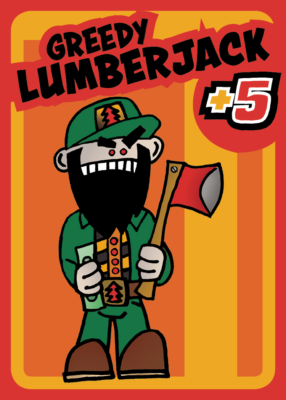 What is 9th Level Games current Kickstarter all about?

Our new game is called BEARICADES. You represent a forest full of cute animals that are trying to stop and survive against a never ending onslaught of lumberjacks. It’s a survival game – with cute animals. The game is quick to learn, and fun to play – and has great replay value as each forest is made of 4 animals – and there are 16 animals all with unique powers. As the forest animals, players setup BEARICADES and recruit PREDATORS (like The Cougar, The Bat, or The Wolf Pack), to defend against the incoming hordes of lumberjacks. You need guile, strategy, and luck to save your forest.

But – better than reading this, just go over to the Kickstarter website and listen to an animated BEAR talk about it – an ANIMATED BEAR!

Do you think that bigger companies should be using kickstarter?

For larger companies there are 2 major trade offs that they need to make to use Kickstarter. 1) They need to open up to their fanbase, Kickstarters are very public – and about timing and costs and decisions. 2) You are giving up about 10% of the total amount gained – to both Kickstarter and to the credit card processor. For a large company – these margins are just being lost – for a smaller company – we don’t have the infrastructure to do it without them – so its worth that.
As for the complaint that large companies don’t “need” to use Kickstarter – and shouldn’t, morally – that’s just dumb. Large companies with hot properties are bringing NEW customers to Kickstarter – and that is a great thing for smaller companies. If your game can’t compete with the big boys on a level field – maybe it’s not worth doing it. Also, most of the large companies that do come to Kickstarter are coming t produce passion projects or cool things that otherwise wouldn’t get made – so I encourage more of it.

Can you rock a bow tie?

Can i rock a bow tie…. of course. Hand tied bowties are the king of manly accessories. It helps that I am a bit of a dandy…photo evidence attached. 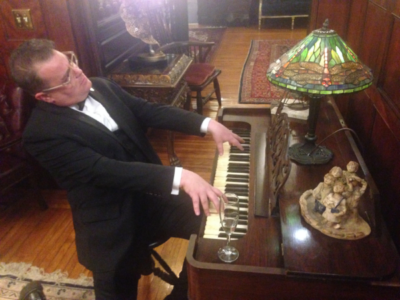 Wow. That’s hard. We tend to cycle game night games between large group staples (like Coup, Masquerade, etc.) and the new hotness (usually whatever I just got shipped from Kickstarter). We have a serious Kickstarter issue – between Heather and I we have backed well over 200 projects…many of them games, so there is always a new thing. Right now, we are really enjoying ONE DECK DUNGEON. Because we are part of a lot of game design communities – out game nights tend to almost always feature some prototypes.

What is coming up in the future for 9th Level Games?

• So many things are coming up – im going to be cryptic and weird and give you this list:
• An anthology of story games about 13 year olds
• A b oard game with a bag of meeples
• A game where pretend to be a comic book publisher as you create issues of a comic book
• A series of “bequest” games (I know, wtf is a Bequest Game)
• A game about rappers dropping dope rhymes