For this post we have Tom_PaintsStuff and his continuing adventures in the current tournament scene.

Recently I posted about attending a 40K tournament at which, even playing the new broken Tau, I achieved a solid 0-3 record. I came away from this experience with a plan, a solid resolution, I would learn to not suck at 40K. This is harder than it sounds.

The first step was to stop army jumping. I am going to play Tau, even when they stop being the shiny new army. I am going to practice with the army exclusively, and work hard on getting better at playing it. My goal was also to play at least 2 games a week, even if against myself, and aim for a tournament once a month.

Well, I’ve managed one game a week, which isn’t bad for a grown up with a job and kids. I’ve also been talking to other players, and paying more attention to the mistakes I make. This lead me to a couple of key realizations: I get distracted and forget things, and I don’t plan ahead for games.

Preparing for a tournament.

With this practice in hand, I set my sights on the Luton Tabletop Gaming Club & Toys of Mass Destruction event in Luton. Another three round RTT. I refined my list, took on board some of the results from the last event, and most importantly I created this: 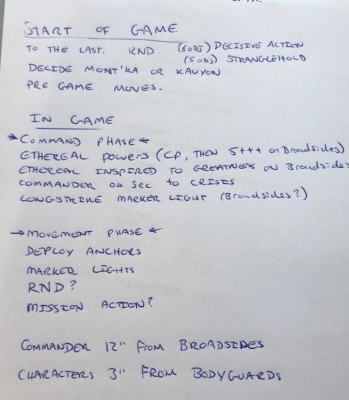 This is my cheat-sheet. I lays out everything i need to remember in each stage. I still need to add some more bits, but it was my sacred text at the event.

Flamer upgraded to the thermoneutronic projector.

He’s a beast. Enforcer armour puts him on 2+, dropping to 1+ from the relic, with a 5+++ and -1 damage. The thermoneutronic projector gives him a nasty punch in both cc and shooting, and the warlord trait gives him full rerolls to hit and wound. (Which he needs, because GW haven’t errata’d that the upgraded flamer auto hits, right now it’s the most inaccurate flamer in the galaxy.)

The character Ethereal from Vior’la. He does two prayers on 2+, and has a nasty cc surprise with his 5 attacks, hitting on 2+, S5, ap2, 2d. I took him mostly because I had him painted, and for 25pts I save on the command point to give a normal ethereal the Humble Stave relic. 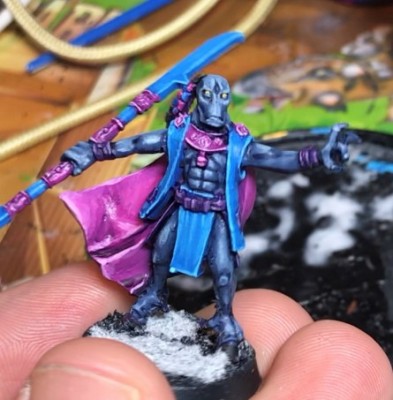 Because if you’re playing Tau sept, why not? He’s got the rail gun everyone is scared of.

Kroot are great right now. Objective secured bodies with a pre-game move, dirt cheap. I found myself throwing them forward and trading them very happily. Guaranteed me stronghold on turn 1 most games.

– One unit of Breachers

Honestly, these are just ok. I never found myself taking advantage of their guns, and they might get traded for Kroot or a strike team.

Oh my god, these guys are so good. 24pts for 4 Kroot hounds with a 9” pre-game move and a 12” move. Fundamentally they forced my opponents to kill them each game, and anytime they’re shooting my 24pt Kroot hounds instead of something else I am winning.

– One unit of tactical drones

2 shield drones, 2 marker drones. Still good. Great for screening, great for move blocking, consistently marker lighting. Also used to spend 1CP and blow up a drone to protect a battlesuit if you want to pretend you’re using the old codex.

He looks really intimidating. People put a lot into killing him. He’s quite hard to get rid of.

These exist purely to infiltrate and complete the Retrieve Nachmund Data action. With 1cp they can be pulled off a board edge, and come back on another board edge next turn.

– One unit of Crisis bodyguard

Aibursting fragmentation projectors on all of them, with the leader upgraded to the dominator version. 2 shield drones.

The special spice here is that they come in at 174 pts, 4points more than longstrike and the ghostkeel. So they are my 3rd To The Last unit. They are going to spend all game behind a wall, bodguarding the characters and throwing random indirect fire around. The upgraded version has extra AP, and puts a -4 leadership debuff on anyone hit with it.

– One unit of Broadsides

Pulse Blast Cannon, Twin Burst Cannon. No you don’t get cover, yes I do get +1 to hit fliers.

This is the big shift in my play. I thought extensively before the event about how this army would play. I built it knowing the three secondaries I wanted to achieve, and I prepped to do them.

The Stealth Suits are perfect for this, they infiltrate and have a great strategy that lets them pop up on any board edge (any board edge, even after turn 3, so objectively better than strategic reserves.) Etherials also give CORE units the ability to conduct actions and shoot, so a few times it was the Broadsides doing this.

To The Last (TTL)

My TTL units are a Stormsurge (T8, 22W, 2+ 4++, good luck), the big unit of Broadsides with a ton of drones and the Ethereal giving them a 5+ feel no pain, and the bodyguards hiding behind a wall. I assumed I would manage to keep ⅔ of these alive each game. (I was not correct.)

Stranglehold requires me to hold at least 3 objectives, and more objectives than my opponent, so in 5 objective missions that means 3. But in 6 objective missions that often needs 4, and that is where the Tau secondary Decisive Action comes in, this needs me to hold half the objectives in my Philosophy of War turns (1,2,3 or 3,4,5) It only scores 4 each time, so it maxes at 12, but it’s very reliable compared to stranglehold. I planned to use the Kroot and Kroothounds to ensure this each turn, relying on other elements where needed. Essentially every turn my opponent will try and take the mid-board objectives away, if so I will throw chaff on them and shoot his stuff away. Rinse, repeat.

I arrived to a really nice church hall in Luton and felt really welcomed by the folks there. Nice set up. Very mixed terrain which was going to be a distinct challenge for me.

This was the Skittari Veteran Cohort regiment of renown, so no priests, robots, or Kataphron. Instead what I got was big blocks of rangers, 3 chickens with las, 2 planes with las, and lots of big blocks of the CC Skitarii. Smartly he stuck his chickens and flyers into reserve.

He took first turn and hit lots of my stuff in the face with cc units. However, tau are able to fight that off pretty well, though he kept my broadsides tagged for a few turns.

I was able to stick to my game plan and keep throwing units onto objectives, and the Wall of Mirrors strategy allowed me to get my RND units where they needed to be. His chickens and planes arrived and discovered that they don’t have the punch they used to have, failing to make a dent in the broadsides. Then my army did what it does really well. Longstrike went about one shotting vehicles. The Stormsurge blew stuff up, and my fusion Ghostkeel had a great time shooting flyers.

By turn 3 my commander was punching flyers with his flamer (40K is weird) and it was increasingly looking like a lost cause for the Ad Mech. 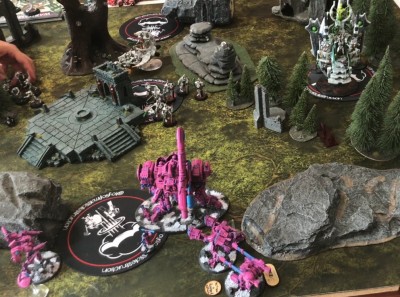 Necrons, against the player who would finish 2nd overall in the day.

The mission was Abandoned Sanctuaries – that stops either player putting anything out of their deployment zone before the game starts. Given I had 7 forward deploy or pre-game move units, and he had the army wide “Relentlessly Expansionist” rule, both of us were hampered by this.

The table was also… COVERED in terrain. 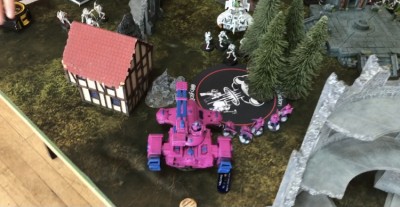 Looking at his list and the mission I decided to try Kauyon, and regretted it. He got in my face so fast I was constantly on the back foot. Great play from my opponent putting me off my game and keeping the waves coming regularly. Nothing in my list could really cope with the silent King, unless everything tried to kill him.

He played really well and it was not a great surprise to me that he put me back in my box.

Licking my wounds I found my third round opponent. Playing Shadow Keepers Custodes. This is a classic meta match up right now, and one I think I have the upper hand in. But by this point I was tired and so was my opponent, so minor errors abounded.

His list was pretty conventional. Trajan, bike captain, bodyguards. Bikes with salvo, lots of dreadnoughts, one of the tanks. Plus an inquisitor to psychic interrogation me.

This one looked like it was going to be a brutal tabling by the Tau, but I misplayed some really basic stuff, and underestimated the punch of that bike captain. In the end the MVP goes to his Caladius tank, which powerslid into my Stormsurge, and also blocked off a lot of an objective. This gave me a big headache, and lead to me messing up some pretty basic stuff.

Also, Longstrike is a character… this made his bike captain happy in all his happy places.

I set out to win at least one game, and I did that. Additionally I felt at least competitive in my others, which is a huge step up from where I was before. Three solid games, where I did not feel like the chew toy. I ended 21/24, solid progress up the card from two weeks ago.

My cheat sheet and plan worked, and I need to remember this is the way forward.

Army wise. With Eldar hitting the scene this week, I think I will be switching to Bor’Kan rather than Tau Sept. This gives them the ability to reduce to strength of all weapons that are S7 or lower, down by one. In practical terms the biggest advantage is it moves S6 Shuriken cannons down to S5, wounding many of my suits on 5s. Bor’kan also have the strategem to make one weapon on any unit ignore invulnerable saves.

The price of that is losing Longstrike, but I was not convinced by him on balance. He’s a bit of a meme.

With him out of the list I can buff up a few of the MVPs. More marker drones on characters is a good start. Plus I have a new silly character move I want to test out.

Greater Good and all that.