Thanks to Rory I have the opportunity to blog a guest section on a new project in 40K. Normally I am an AoS painter with a little 40K on the side so starting something new is quite a change for me. I am a heavy converter, there is rarely a model that I will make or paint from the box or even stick to box colours – and this project is exactly the same.

I had a look at the Adeptus Mechanicus stuff when they were released and I must admit they NEARLY had me, but thankfully I took the time to think it over and let it sit as a thought in the background. I read up on them and even had a read of the Dark Mechanics stuff.

That part grabbed me but I have never been keen on Chaos stuff in general (odd because the conversion opportunities are amazing).
Fast forward to the release of Nighthaunt (AoS) and I liked the look – however, I did not want to start another AoS army or add to the one I have (Undead) … But something stuck in the back of my head. Rummaging through my Sprue-nest I found the spurs for some Ruststalkers

(got them for some Ork conversions) and saw the Gas-Mask type heads… and that’s when it all fell into place.

I popped to my Local GW and had a look at the Nighthaunt models and took a box of Grimghast Reapers home. I also had a GW Birthday Store Nighthaunt model just sitting in the box – from there I started taking photos so enjoy the progress so far… 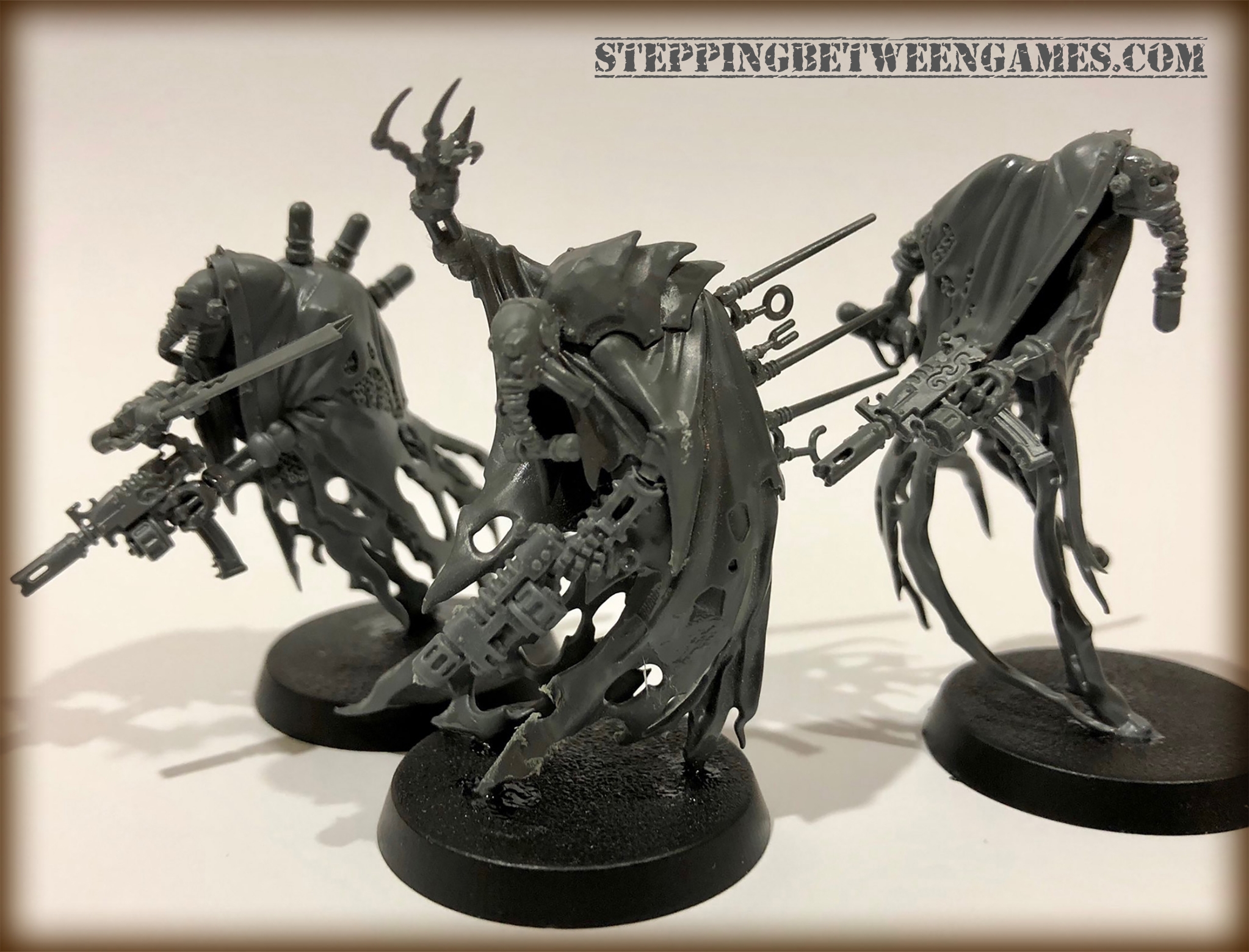 The conversions were extremely easy, the heads for the reapers come separate from the rest of the cloak so no drilling or grinding there (I hate doing that). The heads from the Adeptus Mech stuff were a perfect fit for 80% of the models I selected (with a simple chop the back off the head bit for the last one) – all in all an easy start.

Next came the arms, note that I have mixed the weapons up so I may get a no from GW Tournaments if I ever attend but the conversions called to me! Again I fell very lucky with the arms from the Nighthaunt models as they were mostly simple cut and stick. To start I was very conservative with cutting the AdMech arms to length, keeping them long, sticking with plastic glue then ripping off and chopping more if too long.

I wanted to keep the long and flowing aesthetic of the Nighthaunt models going. Chop here, chop there… and to my surprise, no need for green stuff!

I added some extra detail from the backpacks to the new Dark Mech such as the small valve things to the backs and some trailing pipework coming from under the robes.

robes connect to the base with tombstones and suchlike, a great solid base for the model but not good for what I wanted. After a while of staring at the models I took the plunge on the least favourite of my conversions as a test. To my delight it worked and with careful cutting and simple trimming I got very steady and strong connections to the bases (Phew). 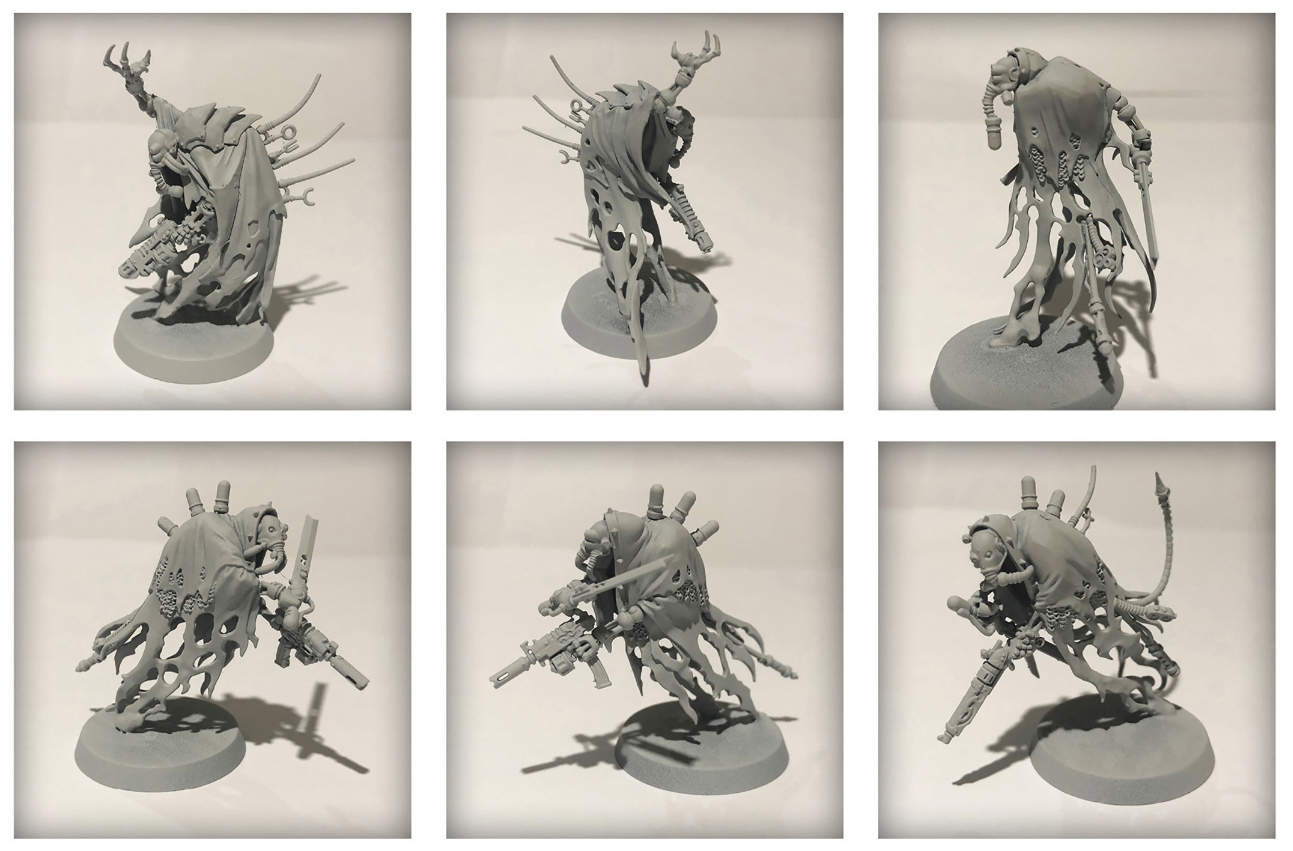 The next part was choosing a paint scheme. I am fortunate to be happy painting over white or black as a base coat, no matter what I am painting (GW base colours are amazing today so I have no fear). The title Dark Mechanicus lends itself to DARK (Duh)… but the Painting Gods had different ideas, the night I was planning to spray them I reached for my black spray

– but it was empty! I looked at the white and decided that the Chaos Gods were probably messing with me – so white it was. 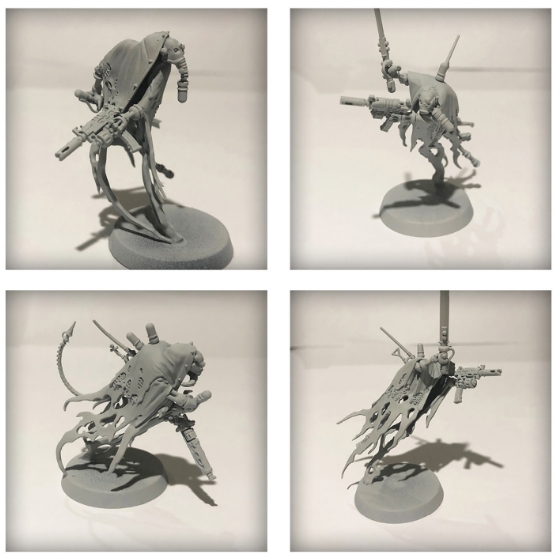 The undercoat on I sat and watched crappy Sci-Fi stuff whilst Googling Dark Mechanics.

Nothing seemed to grab me so I slept on it. The next day I was tidying when I found my weathering Powders (a fairly new thing for me comparatively – have mostly been using them to paint NERF Blasters). My painting has always has a “Dry/Dusty/Gritty” feel to it and with the Steampunky look to the model I decided to go for a muted scheme for these AdMech (a bit like the Undead I have painted) with a limited number of colours.

For the first few bits I simply used Nuln Oil diluted with Lahmian Medium to create soft shadows in the deepest parts, getting a feel for the lines of the robes. Some darker Nuln Oil for the chain armour peeking out from the robes and when dry a little Stormhost silver and brass/bronze in key parts.

Once that was totally dry I used a little Black Soot and Light Rust on the Robes – plus the occasional bit of Dark Earth. Next I moved on to the Metal Parts, Gloss Nuln Oil

over Leadbelcher base was the start, then Orange Rust, Light Rust and some Black Soot. Pretty soon I was starting to like it. 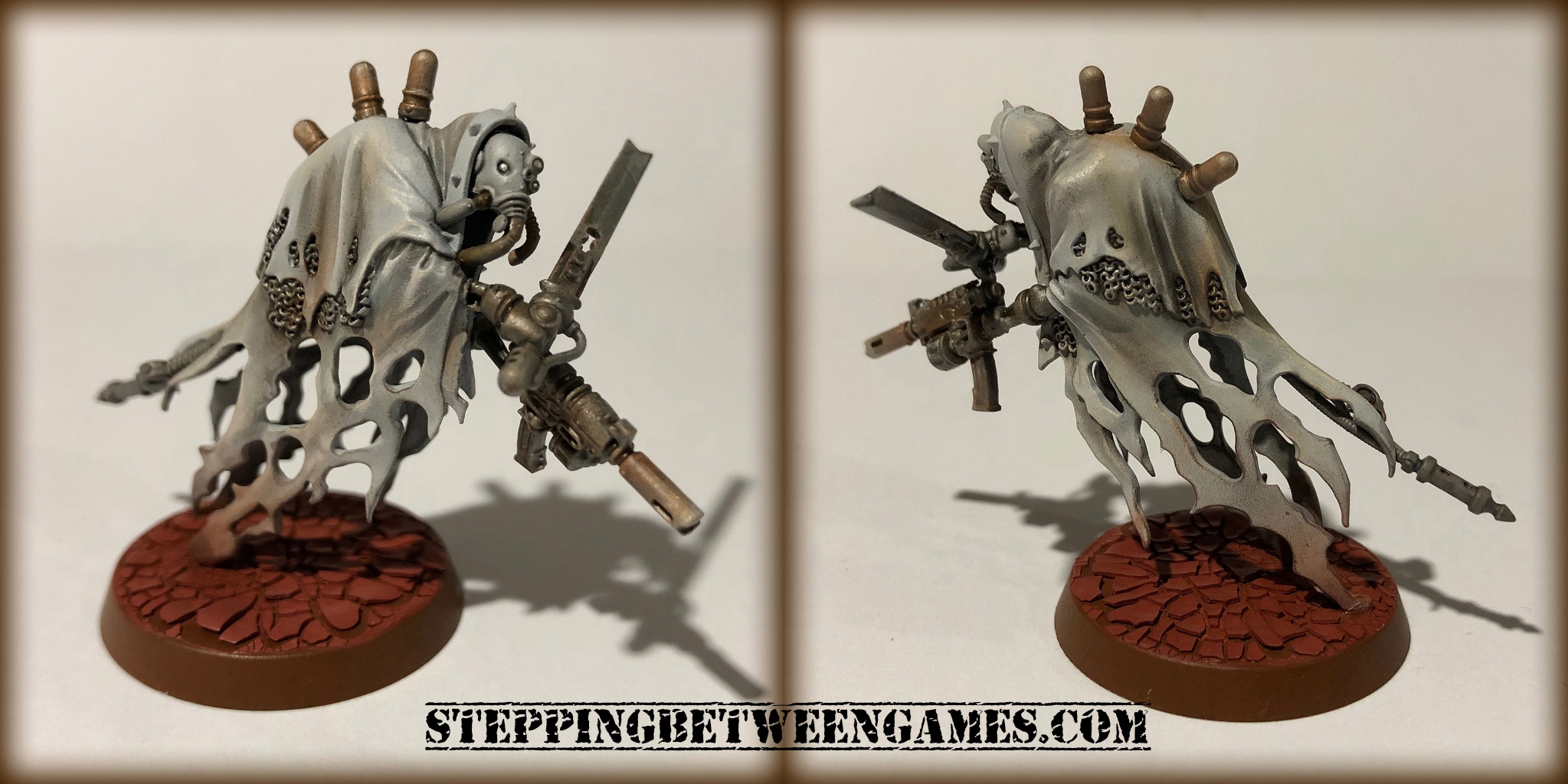 For the final parts I concentrated on following the robes and sharpening things. A Dot of white for the eye brought the face up and some heavier use of Orange rust helped bring it to where I wanted the look to go. After a light spray of Munitoruum Varnish to keep the powders in place it was a simple Mourning Brown Base with Martian Ironearth for the base.

When it dried I did a bit of dust on the very bottom of the robes and the base to show the robes just dragging a little in the cracked dry landscape. A final mist of Varnish and done.

and start looking at what I actually have to do to make an army!

Will keep you updated on here and on my Twitter.