This week we have a conversion guide for Chaos Space Marines Bikers from Bodybag. He shared these into a Facebook group we are part of and was nice enough to write up a guide to it.

Having played a fair few games with my Chaos Marines since I started getting back into 40k I’ve been beginning to feel like my army is lacking some mobility. So, I started looking through my codex for options I’d considered getting some Raptors or Warp Talons. I don’t know what made me decide to do it, maybe it’s playing against a friend Rich’s Genestealer Cult with the Jackals, and they’re amazing looking bikes; but the idea was born. I figured with a bit of extra pipe I could extend the forks, I thought about adding a trophy rack, and then using left over CSM parts to update the riders themselves.

I used 2.4mm OD (Outside Diameter) Pipe – comes in packs of 15 for like £12 but it’s more than you’ll ever need for this project. I’ve done 6 bikes and used like 4 of them with some wastage.

A friend of mine, who some of you might know Massive Joe; is the king of conversions in my mind. Joe just has a natural talent for it, he’s used chain in the past on conversions and he linked me to this when I asked what I should get. When ordering I went for 2x 1 metre packs, with 15 links per inch. This keeps it a fine chain which looks the right scale for the models we’ll be working on. I guess if you were working on a bigger model, you could probably go for less links for a chunkier chain.

So, the models I’ve made aren’t really the cheapest and it’s quite wasteful due to how the new Chaos Marine models go together. I’d got spares kicking around from an Apocalypse detachment and a couple of copies of Shadowspear so it didn’t bother me too much.

I absolutely love the new sculpt of the Chaos Marines

, they really have upped the game and made the models look amazing. They aren’t the most poseable of models, but GW has raised the bar when it comes to how dynamic models look these days so it’s not that much of an issue really.

Ah, the models that started this whole project off. I got back into 40k with the release of Apocalypse in 8th edition. Seeing the box of 30 Chaos Space Marines was enough for me to go ‘well that’s the start of an army I guess’. I hadn’t really paid much attention to the fact that you got the 6 bikers until the box arrived. Then they’ve been sat in the piles (yes, plural) of shame, until I began the project.

Finally, I’ve used skulls on the top of the trophy poles – I’ve got a box of the GW skulls

I can’t sing the praise of this box enough, it’s such good value for money. If you don’t have it, I’d suggest getting one, I mean what is 40k without an excessive amount of skulls right?

I started the work by trimming the existing forks away from the body of the bike. In the first picture below, you can see I’ve cleaned up where the fork was. 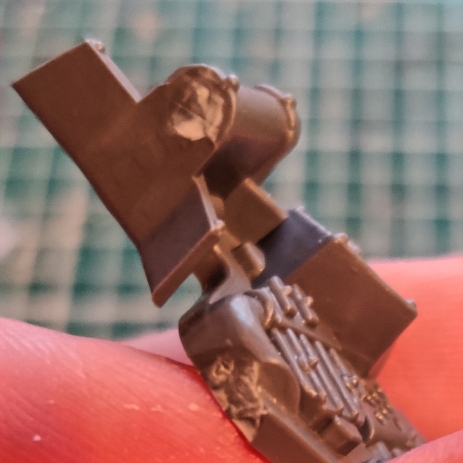 Taking the remainder of the fork I clipped a little bit up from the axle as in the next picture.
From there it’s just a bit of clean up on in. 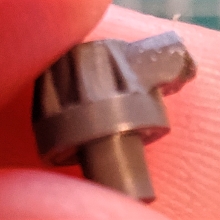 This is where we start to use the plastruct pipe. You’ll want 2 sections of pipe about 15mm long. From there I drill into the body of the bike and make the hole a snug fit for the pipe.

You just want to be able to push the pipe in a tiny bit, put some super glue in the hole then put the pipe in. From their attach the axel section to the bottom of the pipe. In the next image is the assembled side of the bike. 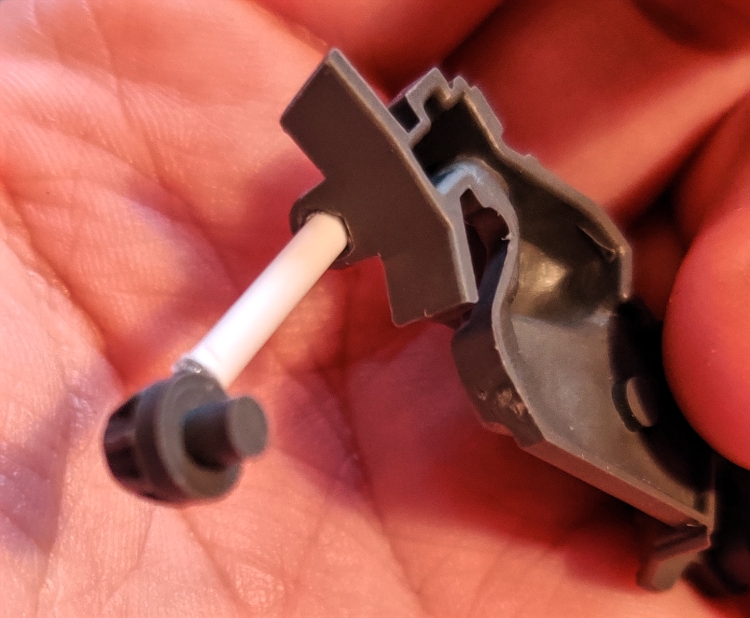 From here assemble the rest of the bike as normal. Once the bike

is assembled you want another two sections of pipe this time about 20mm long, these will be the posts for the trophy rack. I found the easiest way to do this is to lean them out at a little bit of an angle and then super glue them in place. I use activator with this to speed it all up, then grab a couple of the skulls and glue them to the top of the posts.

Next up is the chain on the trophy rack, there isn’t an exact science for this, more of a ‘looks about right’. I loop in round one post then span the gap and do the same. I’ve left some dangling on either end; I’m still undecided whether I’ll hang some heads off the chain or not. 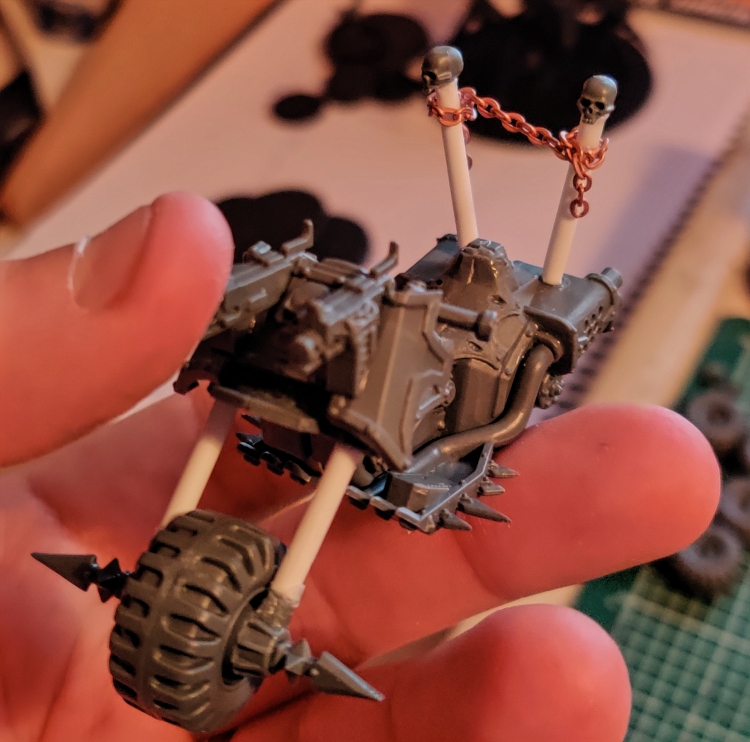 Moving on to the rider, this will require a reasonable amount of cutting, filing and clipping.

I’ve found the easiest way with some of the bodies is to build the marine torso up, so you’ve got a body with no arms/head etc. From there you can saw the marine in half below the belt line. After this, take the rider legs and do a dry fit, then trim the legs and torso until you get a decent fit. I’ve given every rider one of the arms from the biker sprue. They can hold the handlebars then used new marine arms to give them other weapons. The next two images are a completed rider. From the back you can see the joint isn’t perfect; you could fix this with some green stuff if you really wanted to. I’m probably not going to bother as it won’t be massively visible. 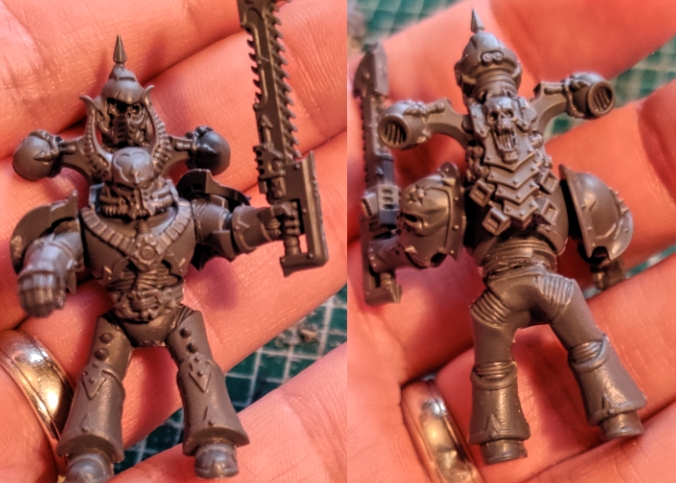 That’s pretty much it, it takes me roughly an hour from start to finish on each biker. Overall, I’m really satisfied with how they’ve turned out. I think once you’ve attached them to the base it really helps to see the change. They occupy most of the oval base. You get a pretty large amount of clearance as well which I personally really like. Here’s the first 3 I’ve done, one with a flamer, one with plasma and then the champion with a chainsword. 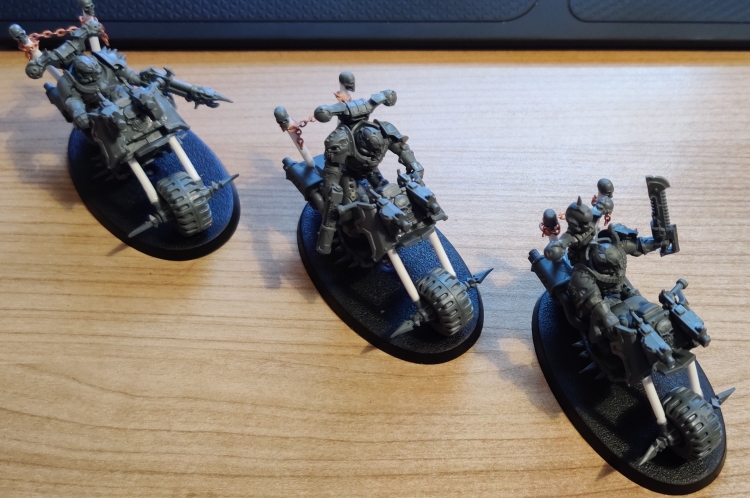