So my 8th edition Thousand Sons marched to war for the first time. They were to face down the vile unwashed (unpainted) Orks. Not a great match up for a a pretty elite focused army like the Thousand Sons. But then both of the armies were index based so it was a level battlefield. Not being used to doing battle reports I didn’t take enough pictures so this will be a rough account. 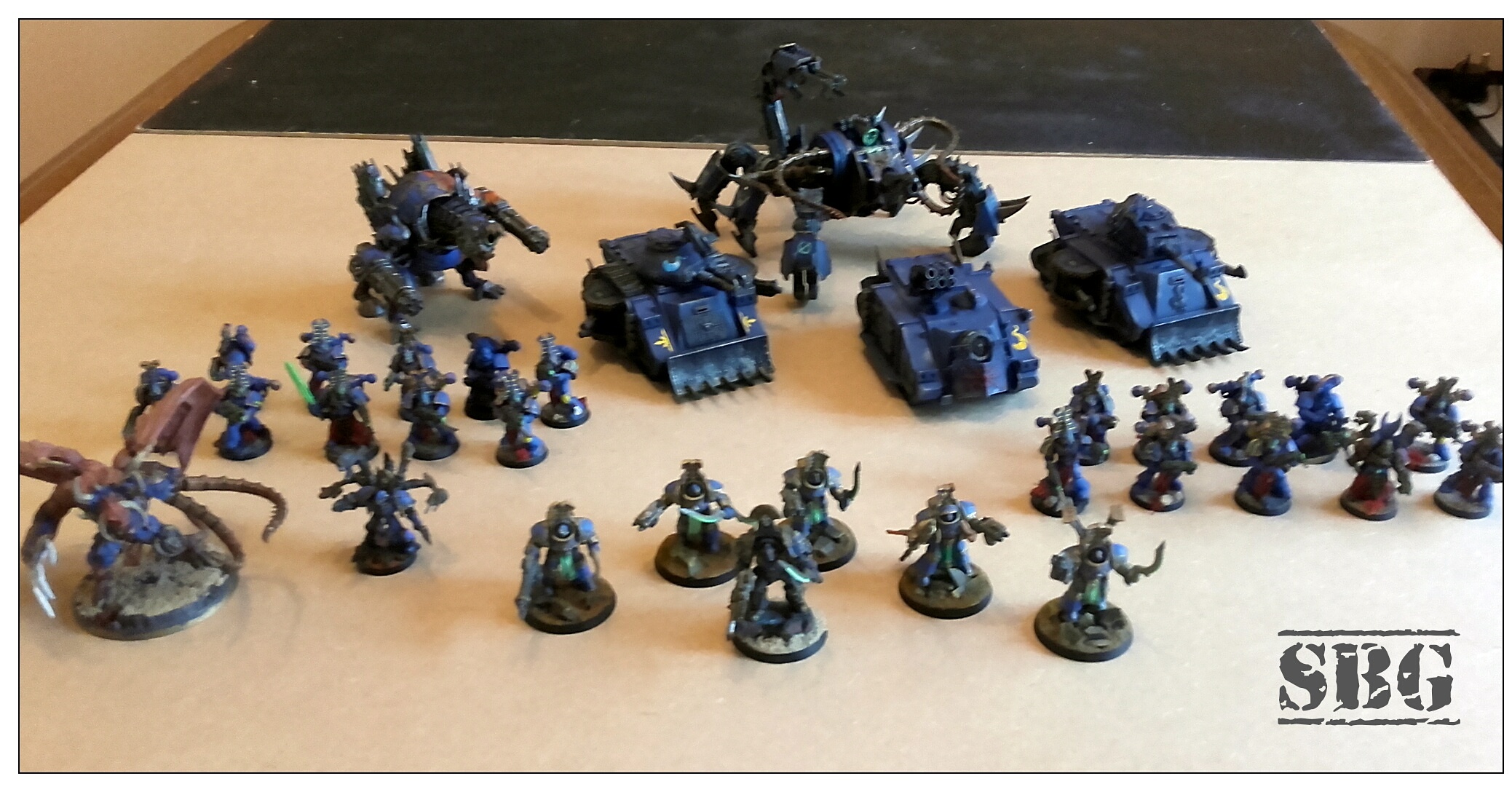 The Thousand Sons march to war!

So I brought a fairly simple army, a patrol detachment and a spearhead. Plenty of other ways to form a better army but I wanted to take stuff I liked the look. Also that I had painted. If possible I always run painted armies, just a personal thing.

In response the Orks had roughly:

The Sons of Magnus may be out numbered here. 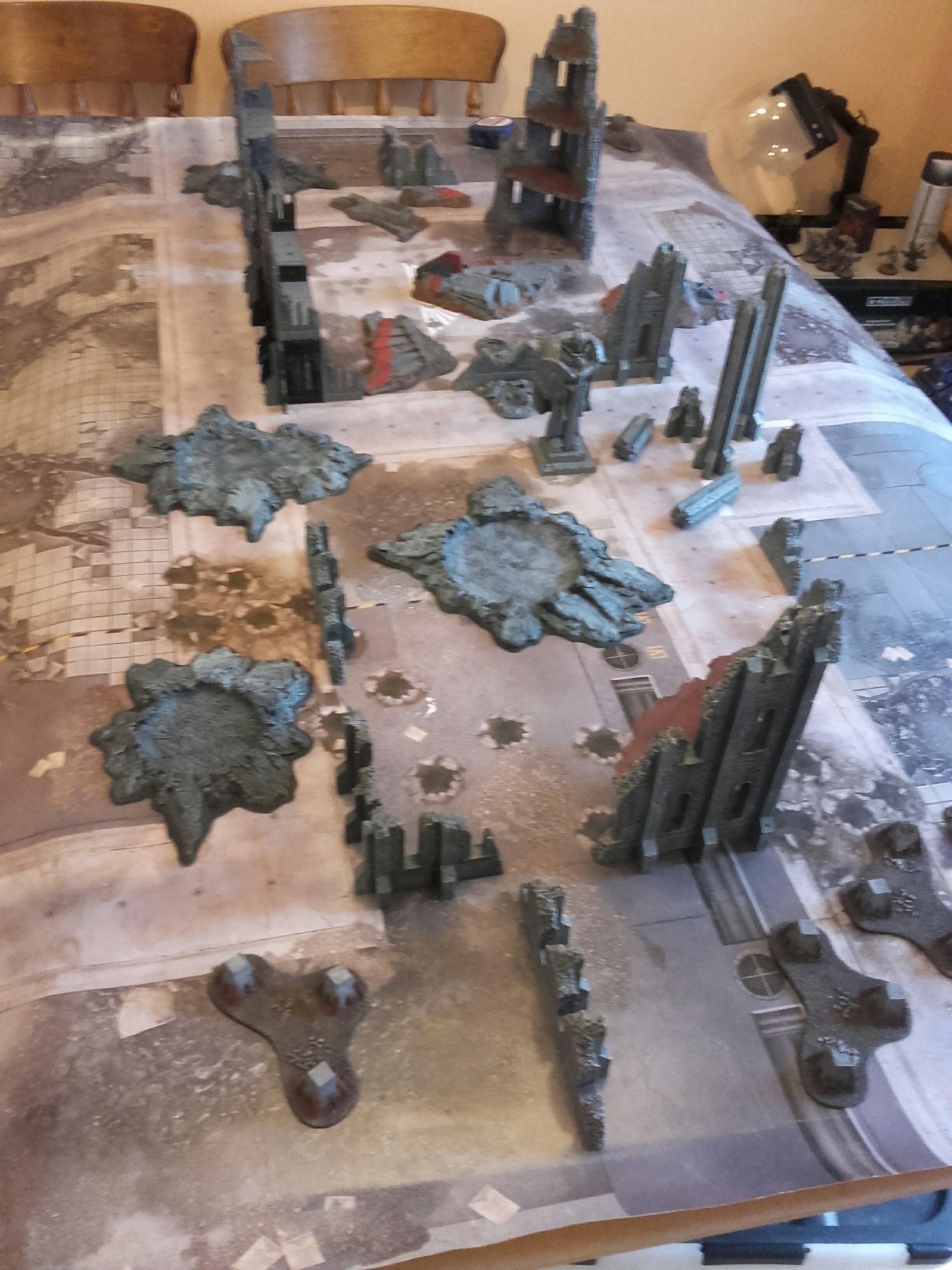 These barren city ruins were our battle field

So my Orky opponent, Skarnir, not only brought the mat we played on but all the terrain as well. We tried to make it look somewhat interesting but it lacked real line of sight blocking terrain. 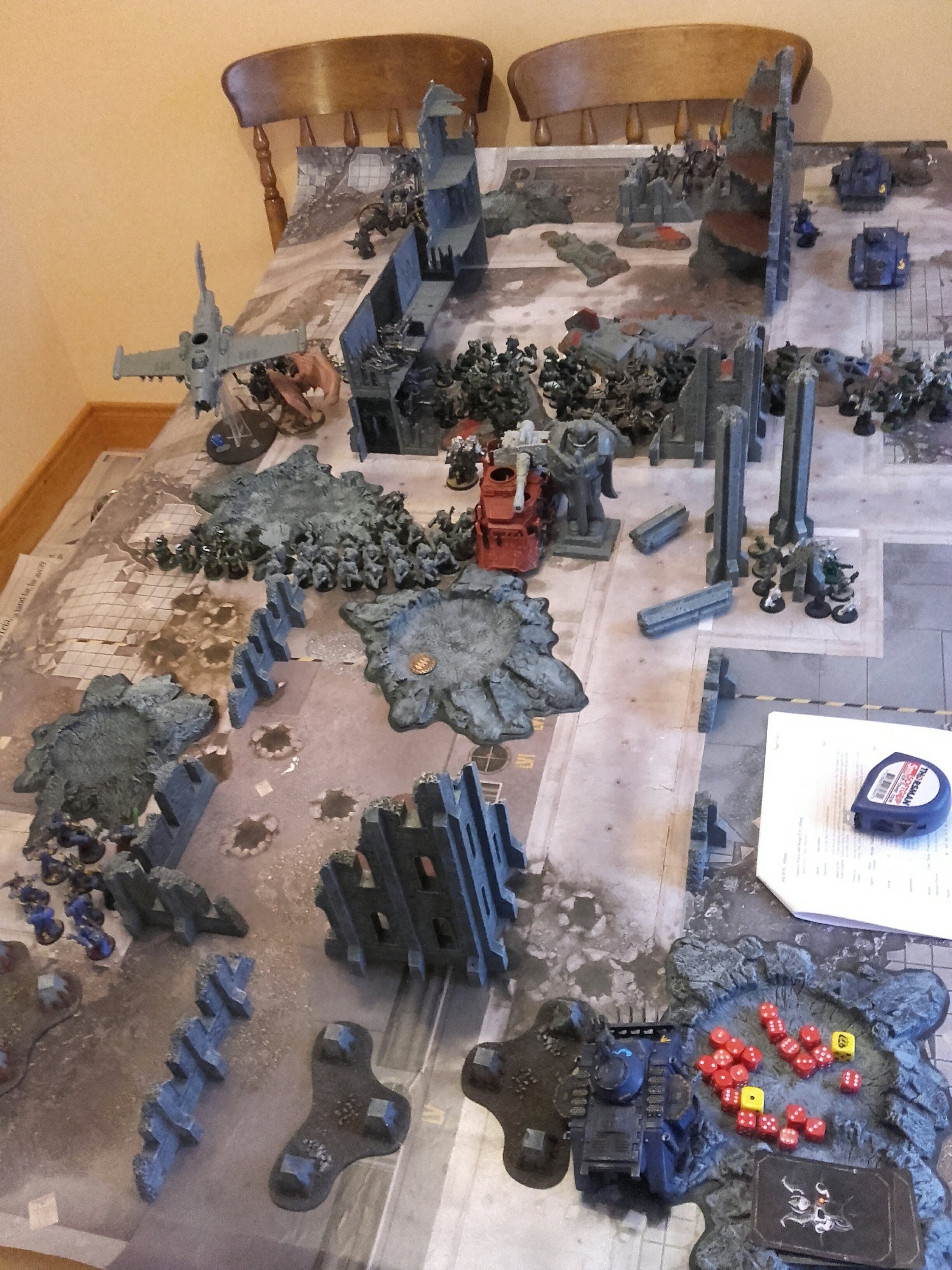 First moves, so many Orks!

This picture is just after my first turn. We rolled up a weird split board deployment and had the Orks slap bang in the middle. They where far to close to me for comfort! You can see my Demon Prince jumped right up, then Warptimed up to his flier. In the assualt phase he left it with just two wounds left! It took a smite rolling an 11 from an aspiring sorcerer the next turn. The flier then blew up and took out a couple of Rubicae. 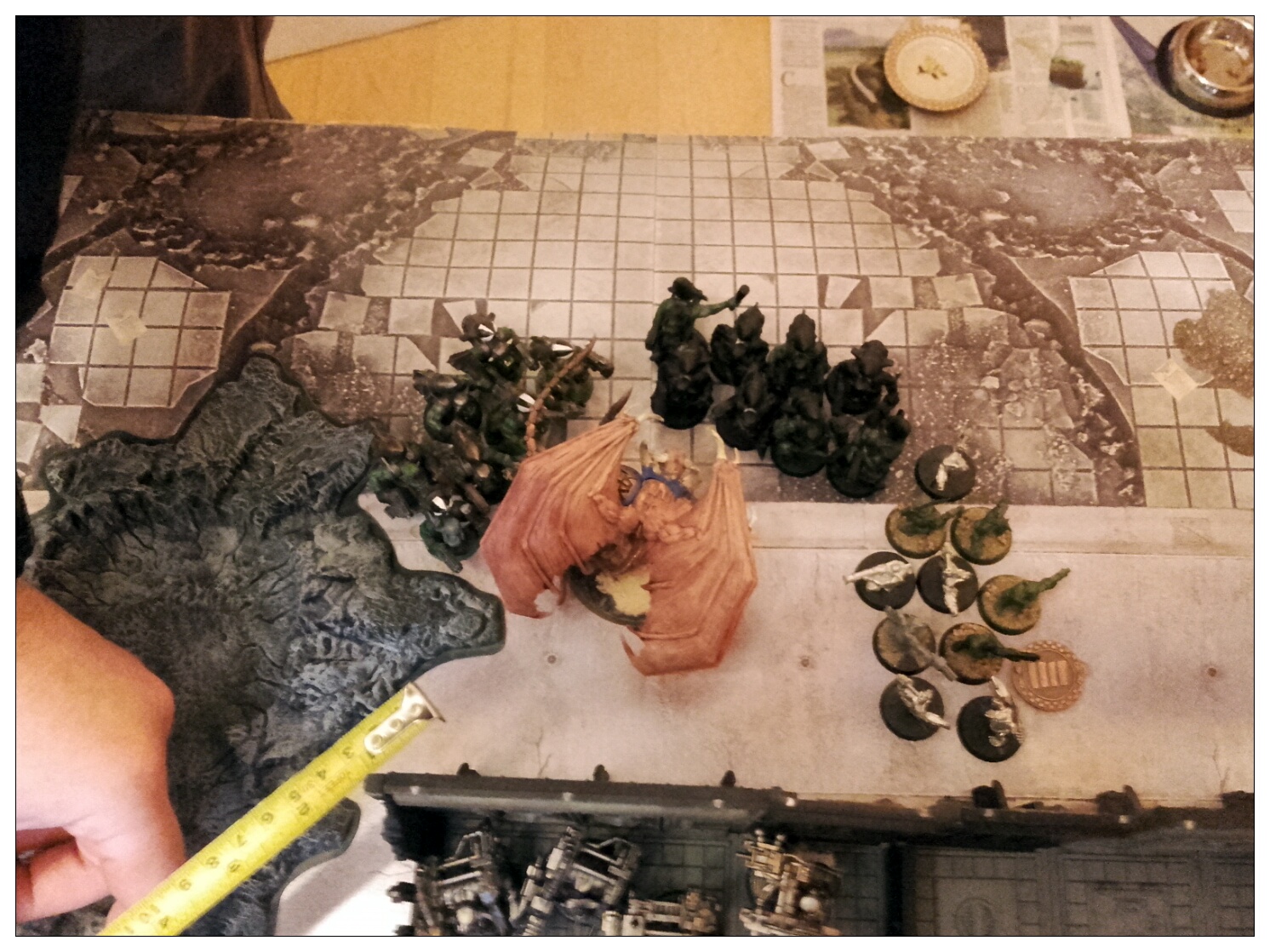 The Demon Prince is surrounded

The poor prince recieved charges from 20 odd Stormboyz, 10 grots and a good chunk of the 30 shoota boyz moving in there. All this left him on 2 wounds and he gutted a mob of Stormboyz. 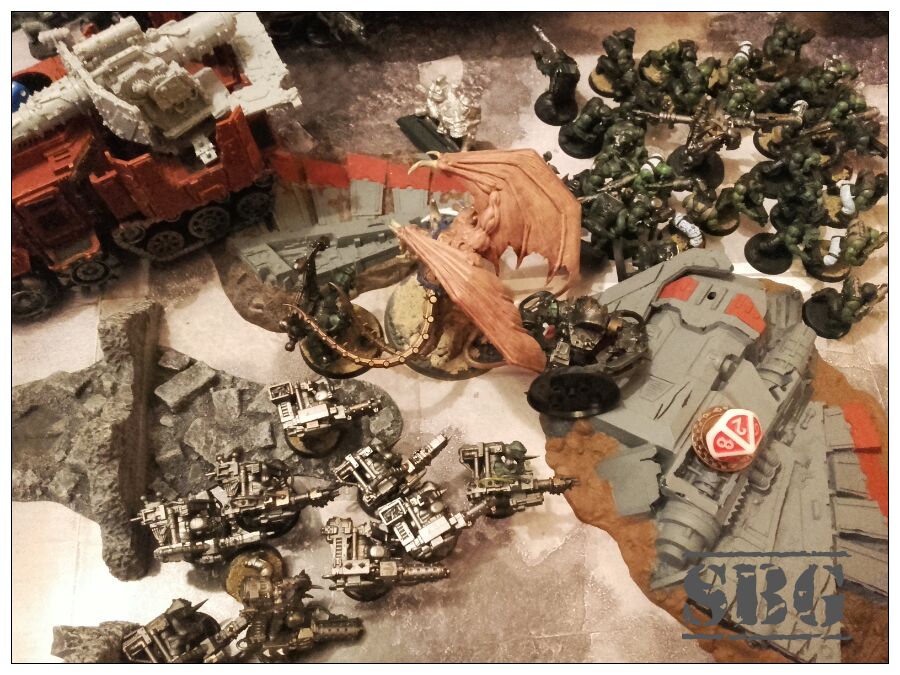 Sensing his time was rather limited I jumped the demon prince into the middle of the Orks and dropped a smite into the Warboss. Careful placement was key there. Then followed up with a charge that took him out. Did a hand little consolidation into the Bigmek to avoid shooting… but the Mek actually killed him! 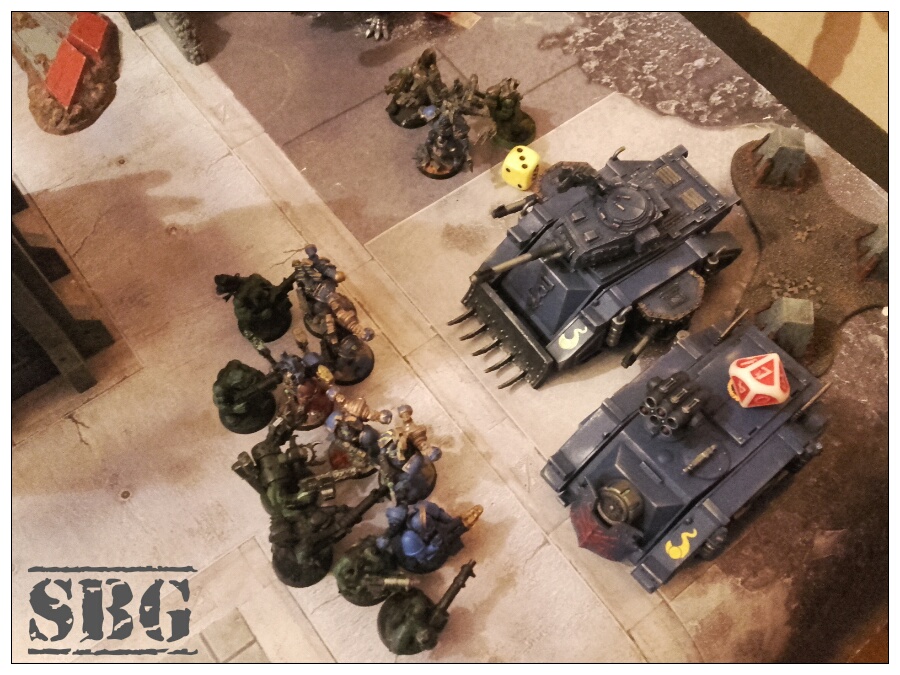 The gun line held, for the most part.

Stormboyz on this flank jumped my Rubics to attack the sorcerer behind (who just happens to look like a warpsmith). Which turned out to be a bad idea, as he killed them off and there wasn’t enough Shoota Boyz to kill of the Rubic marines in front. They slowly won that fight. Last stand of Sorcerer Lord Heka. 10,000 years old and killed by a mob on fungus.

The bodies pile up Despite everything I had killed the points were pretty even but I was running out of bodies. 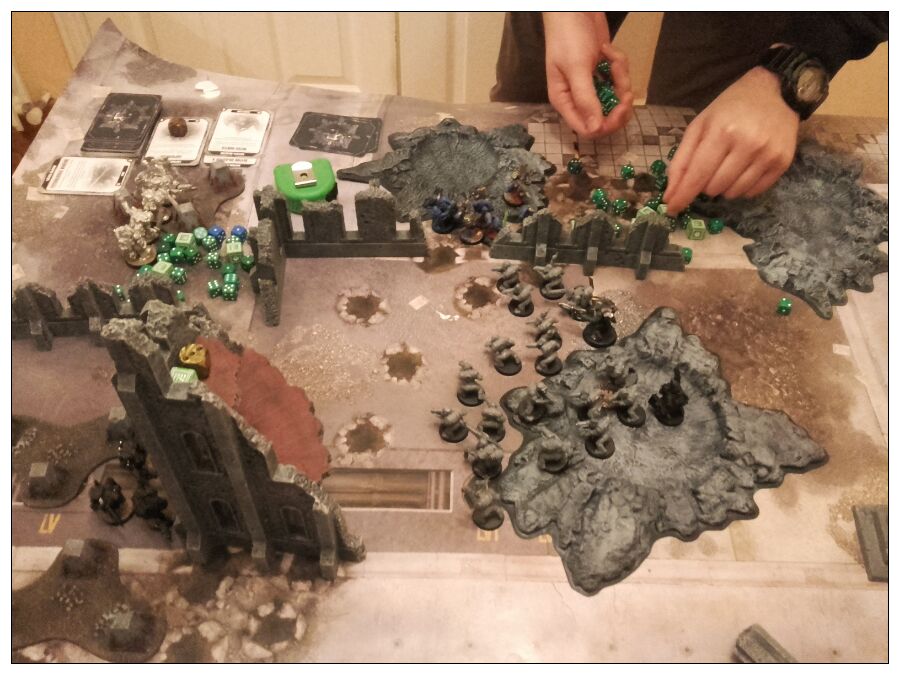 Last views of the battlefield. Those Orks would soon sweep onto my rubics and slowly maul them. 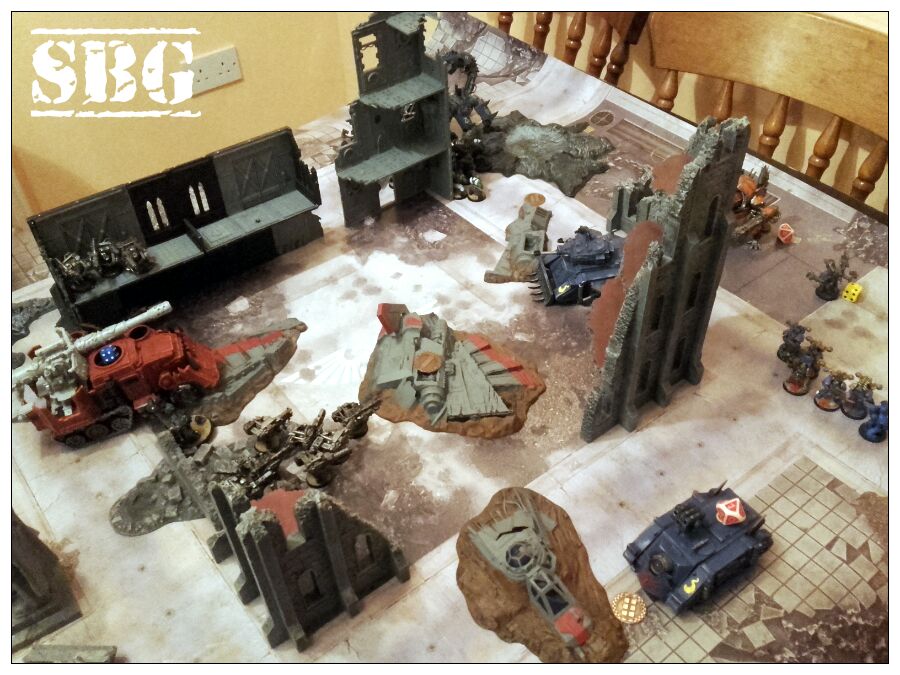 I went on to pretty much control this area, killing off the lootas and the battlewagon. But my defiler is up behind that building at the top, fighting a battle with 30 other boyz. A battle it eventually lost and sadly didn’t even explode.

In the end the game was called at the bottom of turn four with the Orks ahead by a victory point (due to time). A riot to play despite the loss. Good opponent and good fun, no sore losers to terrible dice in each side at times. I might try tweak my list and challenge Skarnir again!