This is the fifth in a series of articles by my friend Allen Stroud: an author, university lecturer and long time Warhammer fan. So over to him: 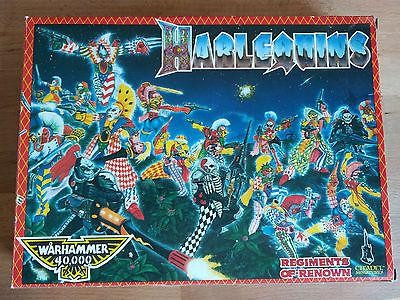 When I started collecting Warhammer 40K, back in 1990/91, The Harlequins Regiments of Renown boxed set was one of the first collections picked up by my friend James. A Harlequin was also the first lead miniature I tried to paint. I didn’t do very well and the result had to be stripped away when we discovered the usefulness of methylated spirit and a toothbrush in getting rid of acrylic paint on lead models.

Harlequins were initially a separate force to the Eldar, the rules for them appearing in White Dwarf and the Red Warhammer 40K Compendium. The High Avatar, High Warlock and Solitaire were the leaders of the troupe. The former two were obscenely over powered psykers who we once put up against an Imperial Guard platoon along with some Sanctioned Psykers. The two models absolutely decimated the entire force! 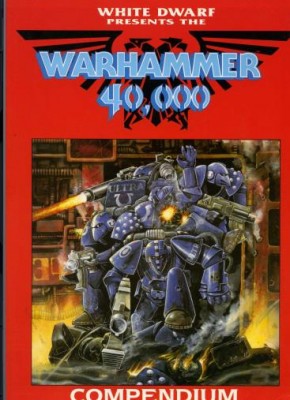 The red book was also the source of a wonderful piece of fiction that described the role of the Harlequins in Eldar society and how the Solitaire would hide amongst the people of each Craftworld to judge their worth when a Harlequin masque arrived to perform. If he found them worthy, they would perform the great dance, depicting the fall of the Eldar Gods and the rise of Slannesh.

My friend James already owned Harlequins, so I didn’t want to buy the same figures at that point. 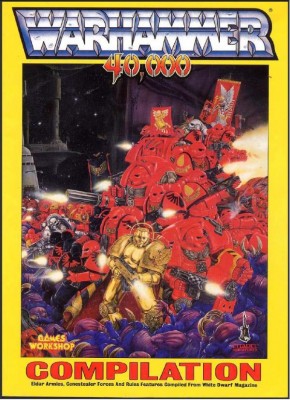 The Yellow book army list (Warhammer 40K Compilation) only featured a listing for a single troupe of Harlequins, to be led by their Avatar (not to be confused with the Avatar of Khaine). There was a metal miniature Harlequin jetbike released as well, but I only saw pictures of it.

After this, there were no new Harlequin miniatures until the launch of the 4th edition rules and Codex. In 2006, we finally got new Harlequin models in white metal. These were a Troupe Master, Troupers, a Shadowseer and a Death Jester. 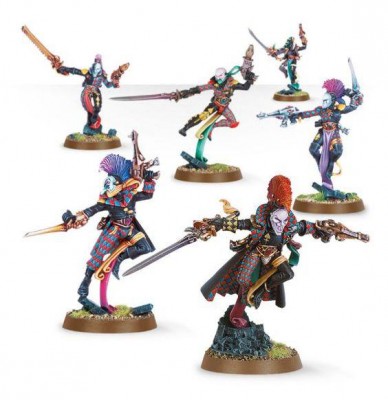 I started collecting Harlequins at this time as I’d been playing more games and was looking to complete my Eldar force. I picked up the little boxed set as a birthday or Christmas present and quickly painted the group. I then went onto Ebay and started hunting down some of the older 1990 miniatures to convert and update. My thought was to complete a troupe in the codex list with all different models, so they would look suitably individual. As usual, I looked for badly painted and abandoned miniatures and picked up a few bargains, gradually supplementing my boxed set. On my return to Warhammer 40 in winter 2016, I discovered the new Harlequin plastics and the complete codex. I picked up some spare from a sale and have now started making more Harlequins for a complete masque force.

Looking over the new Games Workshop photography of painted Harlequins, I feel, by looking to create uniforms, they’ve gone in a direction I wouldn’t want to go. Whilst I can’t compare my painting skills to their professionals, I see my Harlequins as being very individualistic, so my painting of them reflects this. I want each, apart from the Death Jesters, to be a riot of colours, making the overall image of them on the battlefield to be something of a circus.

I picked up more of the white metal Harlequins. They come as two-part miniatures, with a collection of gymnastic legs and posed bodies to make leaping action models. By using green stuff and swapping the parts around, then painting the miniatures with different colours, I was able to create some more individuals and stick to my circus theme. The new plastics are an excellent range, giving lots of weapon options and different masks. There is something a little bit too cool about them though. The older models are a little bit more frenetic and enthused. 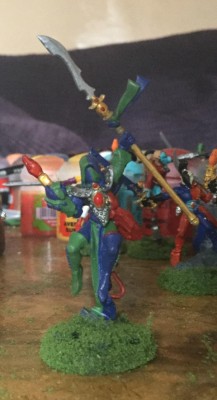 The white metal release of 2006 set a style for the Harlequins of being in agile action poses. Some of the lead of the 1990 miniatures lends itself to being bent and moved into posed that fit in with this, whilst using some of the Eldar plastics from other kits can provide the necessary scenery for each Harlequin to balance and leap over.

This model is the top half of the 1990 High Warlock. The bottom half is a 2006 Harlequin trouper and the left arm is a 2016 Harlequin plastic. You can see where the concept for the 2006 Shadowseer came from. This model has been converted to be a second Shadowseer for my Masque.

The backpacks of the original Harlequins had long elongated pipes on either side, much like the new Shadowseer’s backpack. This Shadowseer has the old backpack, so the pipes are along the backs of his arms.

The picture of the original model gives you a sense of the customisation. The powerfist/claw of the left hand (right as you look) has been extensively remodelled with green stuff. The weapon in the right hand is capped with the end of a fusion pistol.

Here is my original Harlequin troupe (with new Forgeworld Avatar in the background). 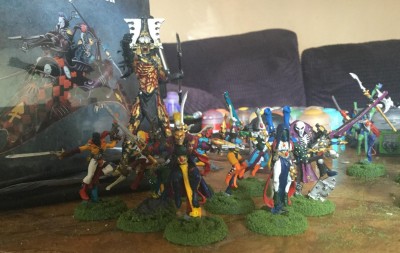 I’ve always found painting Harlequins very challenging You have to commit to your colour scheme and just go for it. Looking back over these as I’m painting other models to add to them, I’m finding one or two places where they could be improved and tidied up.

Here are my converted 1990s Harlequins. These older models fit in well with the 2006 Harlequins with some small modifications. Mostly, OI have separated them from their original bases and tabs (that slot into the slottas) to repose them using scenery, which was the innovation with the later models. At the time when I started work on them, there were no plastic Harlequins, so to get more variations of model in the Troupe, the older miniatures were essential.

Here are my new plastic Harlequins. 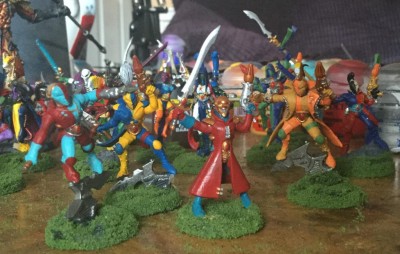 The two-tone paint scheme works fairly well. I’m not that confident in trying to do checkerboard techniques and the like, so the half and half of two colours, varying the colours so no two miniatures have the same combination is something I’m happy with. Later, I may look at trying to bring more detail to the coats and jackets with some stripes and painted designs

Again, these Harlequins are mostly crouched on small parts of scenery. These three took advantage of some parts of a broken old Dark Eldar Jetbike I had lying around.

In addition to all of these, I’ve mixed and matched a few of the 2006 model torsos and legs. I’m also in the process of painting the new plastic Death Jester and the new Solitaire, along with some more old Troupers and new plastic troupers. After I finish those, there’s a Shadow Weaver or two to build and paint.

The next article will be on Tanks and Transports.